The Canadian Hydrogen Intensity Mapping Experiment fast radio burst (CHIME/FRB) team, which discovered more than 500 new fast radio bursts in the first year of the detector’s operations, will receive the 2022 Lancelot M. Berkeley − New York Community Trust Prize for Meritorious Work in Astronomy. Bestowed annually since 2011 by the American Astronomical Society (AAS) and supported by a grant from the New York Community Trust, the Berkeley prize includes a monetary award and an invitation to give the closing plenary lecture at the AAS winter meeting, often called the “Super Bowl of Astronomy.” The 239th AAS meeting will be held in Salt Lake City, Utah, from 9 to 13 January 2022. 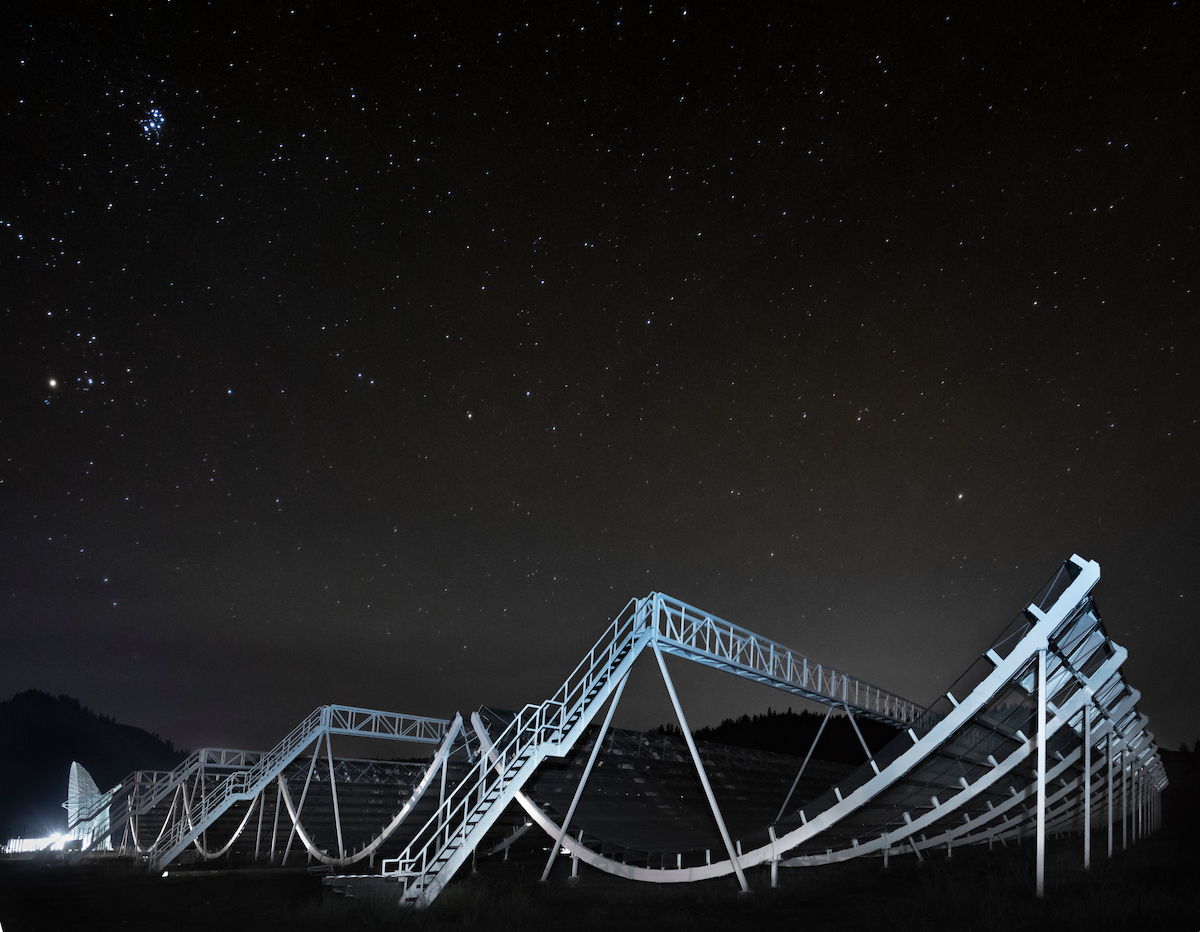 The CHIME/FRB team is being honored with the 2022 Berkeley prize for its dramatic progress on fast radio bursts — brief and powerful flashes of radio waves with enigmatic origins — using observations from the CHIME radio telescope in British Columbia. Though fast radio bursts were discovered in 2007, until recently, only about 140 of them had been found. During the past year, the CHIME/FRB team has presented detections that more than quadruple that number.

The sources of fast radio bursts have long eluded astronomers. With CHIME’s new detections — which include bursts from 18 repeating sources — the amount of data available to characterize these mysterious bursts has grown significantly. CHIME’s observations of the bursts and their distribution on the sky have substantially advanced our understanding of these sources.

Each year the three AAS Vice-Presidents, in consultation with the Editor in Chief of the AAS journals, select the Berkeley prize winner for meritorious research published within the preceding 12 months. The CHIME/FRB team is recognized in particular for an article published in Nature in November 2020 that identified the first known fast radio burst within our own galaxy and tied this flash to its potential source, a known magnetar in the Milky Way. This work has shown that at least some fast radio bursts may originate from young, active magnetars — highly magnetized and dense remnants of massive stars.

CHIME is a large, stationary radio telescope with a broad collecting area, wide bandwidth, and enormous instantaneous field of view (roughly 200 square degrees, equivalent to the area covered by more than 1,000 full Moons). "CHIME's revolutionary design enables it to do many experiments simultaneously, and its wide field of view makes it ideal for both mapping the cosmos and detecting transient sources," says Mark Halpern, Principal Investigator of CHIME.

"CHIME/FRB detects roughly 1,000 fast radio bursts per year, which provides a fantastic data set with which to study the origin of these mysterious objects and to explore the structure and composition of the universe," adds Victoria Kaspi, Principal Investigator of the CHIME/FRB Team.

The CHIME project is co-led by the University of British Columbia, McGill University, the University of Toronto, and is hosted at the Dominion Radio Astrophysical Observatory by the National Research Council of Canada, with collaborating institutions across North America. The CHIME/FRB team consists of dozens of scientists. The Berkeley Prize will be accepted on behalf of the team by Paul Scholz (University of Toronto) and Victoria Kaspi (McGill University), who will jointly give the prize lecture on Thursday afternoon, 13 January 2022, at the Salt Palace Convention Center in Salt Lake City.