The Origins of the AAS 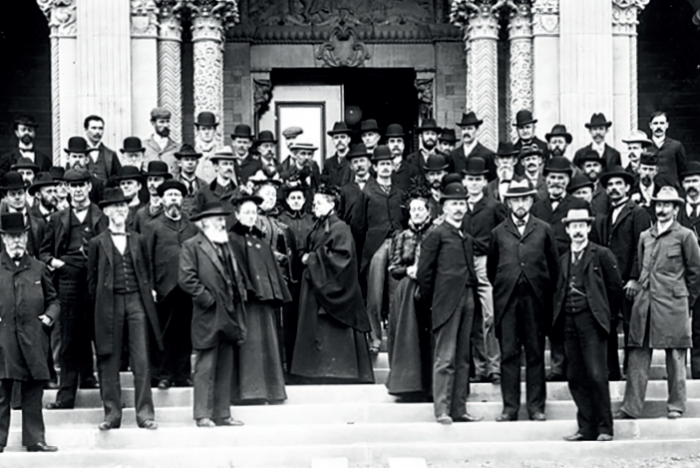 Attendees of the 1897 Yerkes Observatory dedication and the first conference of astronomers and astrophysicists.

Astronomy was well established as a discipline by the late 19th century, but not as a profession. Most astronomers spent the bulk of their efforts teaching. In the early 1890s, a few research institutions existed where teaching was not such a priority, such as the US Naval Observatory, the Astrophysical Observatory of the Smithsonian Institution, and the Harvard College Observatory. By the late 1890s there was also the emergence of journals such as The Astronomical Journal, The Astrophysical Journal, Popular Astronomy, and the Publications of the Astronomical Society of the Pacific.

The American Astronomical Society (AAS) was established in 1899 through the efforts of solar astronomer George Ellery Hale, who also created The Astrophysical Journal and built the Yerkes Observatory, and Simon Newcomb, an astronomer, applied mathematician and autodidactic polymath, who was then seen as America’s pre-eminent astronomer. At the time, there was great pressure to specialize the sciences in America, and Hale and Newcomb set about to organize American astronomy and to redefine it by centering as much of it as possible within the realm of physics.

The first constitution of the AAS was written by Hale, Newcomb, George Comstock, Edward Morley, and Edward Charles Pickering, and the initial membership was 114.

Newcomb served as the first President between 1899 and 1904, and was succeeded by Pickering, Director of the Harvard College Observatory, whose term between 1905 and 1919 was marked by steady growth and a broadening mandate for the Society. Pickering was also passionate about improving the lot of the professional astronomer. He wanted to organize networks of observatories in cooperative research programs that were beyond the resources of any single observatory, and he hoped that the Society would provide the means by which both experienced and young astronomers could share methods and knowledge. Being able to exert scientific authority over a range of political matters was also a primary goal in the formation of the Society for astronomers like Hale, Pickering, and Newcomb.

Because the field of astronomy is so diverse, several divisions started to form as the Society grew, each of which promoting and enabling a different branch of astronomy or astronomy-related science, as well as working within the overall charter of the AAS. The Division for Planetary Sciences was formed in 1968, followed by the Division on Dynamical Astronomy, the High Energy Astrophysics Division, and the Solar Physics Division, all in 1969. Later on, the Historical Astronomy Division came into being in 1980, and the most recent division, the Laboratory Astrophysics Division, was formed in 2012.

The AAS membership now stands at approximately 7,700, and includes physicists, mathematicians, geologists, engineers, and others whose research interests lie within the broad spectrum of subjects now comprising contemporary astronomy.

Abridged version from an essay by Brant L. Sponberg and David H. DeVorkin