This Month in Astronomical History: December 2022

Each month as part of this series from the AAS Historical Astronomy Division (HAD), an important discovery or memorable event in the history of astronomy will be highlighted. This month's author, Mike Marotta, writes about Agnes Mary Clerke’s Problems in Astrophysics. Interested in writing a short (500-word) column? Instructions along with previous history columns are available on the HAD web page.

One hundred twenty years ago this month, December 1902, historian Agnes Mary Clerke (10 February 1842 – 20 January 1907) completed the Preface to her penultimate book, Problems in Astrophysics (London: Adam & Charles Black, 1903). She dedicated the work to her mentor, critic, and friend, Sir David Gill, K.C.B., “whose suggestion and encouragement prompted its composition and animated its progress.”1 Gill began his scientific work as an amateur and was eventually appointed Her Majesty’s Astronomer and Director of the Royal Observatory at Cape of Good Hope, South Africa.2 Clerke lodged with the Gills for two months, through September and October 1888, and completed several projects in observation and spectroscopy. Clerke was the first to record the spectrum of Eta Carinae.2

The point is relevant because although the community of professional astronomers with whom Clerke had corresponded for over 20 years as a historian and news reporter welcomed Problems in Astrophysics, Nature was less than sanguine. In the late middle of the 3000-word review, which presented a litany of technical problems, Richard A. Gregory included a barb that was wholly out of place: "A cynic has said that it is a characteristic of women to make rash assertions, and in the absence of contradiction to accept them as true. Miss Clerke is apparently not free from this weakness of her sex."3 Certainly, if the failing was limited to half the population, our common problems would be reduced by that fraction. A mathematician could suggest to the cynic that providing one male with the characteristic would satisfy disproof by counterexample.

The substance of Gregory’s review was a litany of errors involving spectroscopy and the interpretation of spectroscopic data. Clerke, of course, was citing articles from peer-reviewed journals. To Gregory, Clerke’s failing there was that "the net which she has used in her explorations of astronomical literature is of too fine a mesh, so that she has gathered in results and ideas which ought to have been discarded… Next, as we shall show later, she has not understood the real nature of some of the material collected; and finally, she passes judgment and gives advice on matters which can only be rightly understood by investigators actively engaged in spectroscopic work."3 Clerke’s biographer and partisan, Mary T. Brück, questioned Gregory’s qualifications, pointing out that he had not been active in that field since taking on editorial responsibilities at Nature.3 Gregory also ignored Clerke’s work while at Cape Town.

Perhaps the best context for all of that is to accept the sociological perspective that whatever the empirical facts and rationalist theories, science is also about people, our personalities and interactions. Richard Gregory was engaged in a long conflict against Mary and William Huggins over Norman Lockyer’s theory that stellar energy originates with the accretion of meteoric matter from deep space. Clerke also rejected that theory and she was a close friend of the Hugginses. However, Brück pointed out that Clerke also got along well with Lockyer himself (at least at public dinners where they sat together) because her winning personality was deeply rooted in her humility.3

Only William W. Campbell offered (mild) criticism. “In a book written in so broad a spirit, it would be invidious for the reviewer to enumerate the fifteen or twenty minor errors noticed, but a few should be referred to.” Underlying that comment was the fact that Campbell was a personal friend of Clerke’s, introduced to her in London on his way home after recording the solar eclipse of 22 January 1898. The Observatory said only: “It seems almost an impertinence to say anything by way of criticism of this book.” The Journal of the British Astronomical Association was mute on the subject of criticism. To be fair, both were already in her camp because she was a steady contributor to The Observatory and frequently attended meetings of the British Astronomical Association.

The salient question today is what value this book has 120 years later. By comparison, consider Hindsight and Popular Astronomy by Alan B. Whiting (World Scientific Publishing Pte. Singapore; Hackensack, 2011). Whiting dissects the mass-market writings of six iconic 19th-century astronomers: Sir John Herschel, Sir George Biddle Airy, Simon Newcomb, Sir Robert Stawell Ball, Sir Arthur Stanley Eddington, and Sir James Jeans. Each of them published something for the literate but uninformed middle-class reader. Each segregated accepted facts and theories from their own and others’ front-line explorations as well as from wrongheaded speculations. Yet each was sometimes (or too often) in error. How should we evaluate Agnes Mary Clerke’s Problems in Astrophysics?

Clerke opened the book with this: "The object of the present work is not so much to instruct as to suggest." Her suggestion, however, was that astronomers actually do the work. "The globe is studded with observatories, variously and admirably equipped. Yet innumerable objects in the sidereal heavens remain neglected, mainly through inadvertence to the extraordinary interest of the questions pending with respect to them." The plea went largely unheeded. M. T. Brück grants: “But the book came out, and no one leaped into action.” In his review, William W. Campbell urged others to take them up, though not doing so himself.

Among the advances we have made in the last 100 years is understanding the development of paradigms. A generation must mature before its ideas can eclipse those of the previous generation. In Clerke’s lifetime, the underlying problems in astronomy centered on viewing: clarity of the sky, aperture, and focal length of the instrument. Astronomy was advanced by ever larger instruments placed ever farther from cities. At the same time, photography was improving. Observing and recording those observations delivered the empirical information needed to understand the cosmos and its constituents. However, despite advances in physics and physical chemistry, it remained for the development of quantum mechanics to provide the necessary theoretical framework for astrophysics. That being as it may, Henrietta Leavitt’s work on Cepheid variables was strictly within the schoolhouse of classical physics. Nonetheless, it was not until 1924 that Edwin Hubble used that information to prove that the Milky Way is not identical to the universe. Given all of that, Clerke’s Problems in Astrophysics is a snapshot that captured a moment in the history of astronomy, and more.

Take any subject in this book and look it up in any first-year university survey textbook in astronomy, then use the search term to read recent journal papers. Many of the subjects remain incompletely developed to our satisfaction. Moreover, discounting purely historical investigations, the Harvard Astrophysics Data System provides over a dozen instances of peer-level citation to Problems in Astrophysics since 1946. 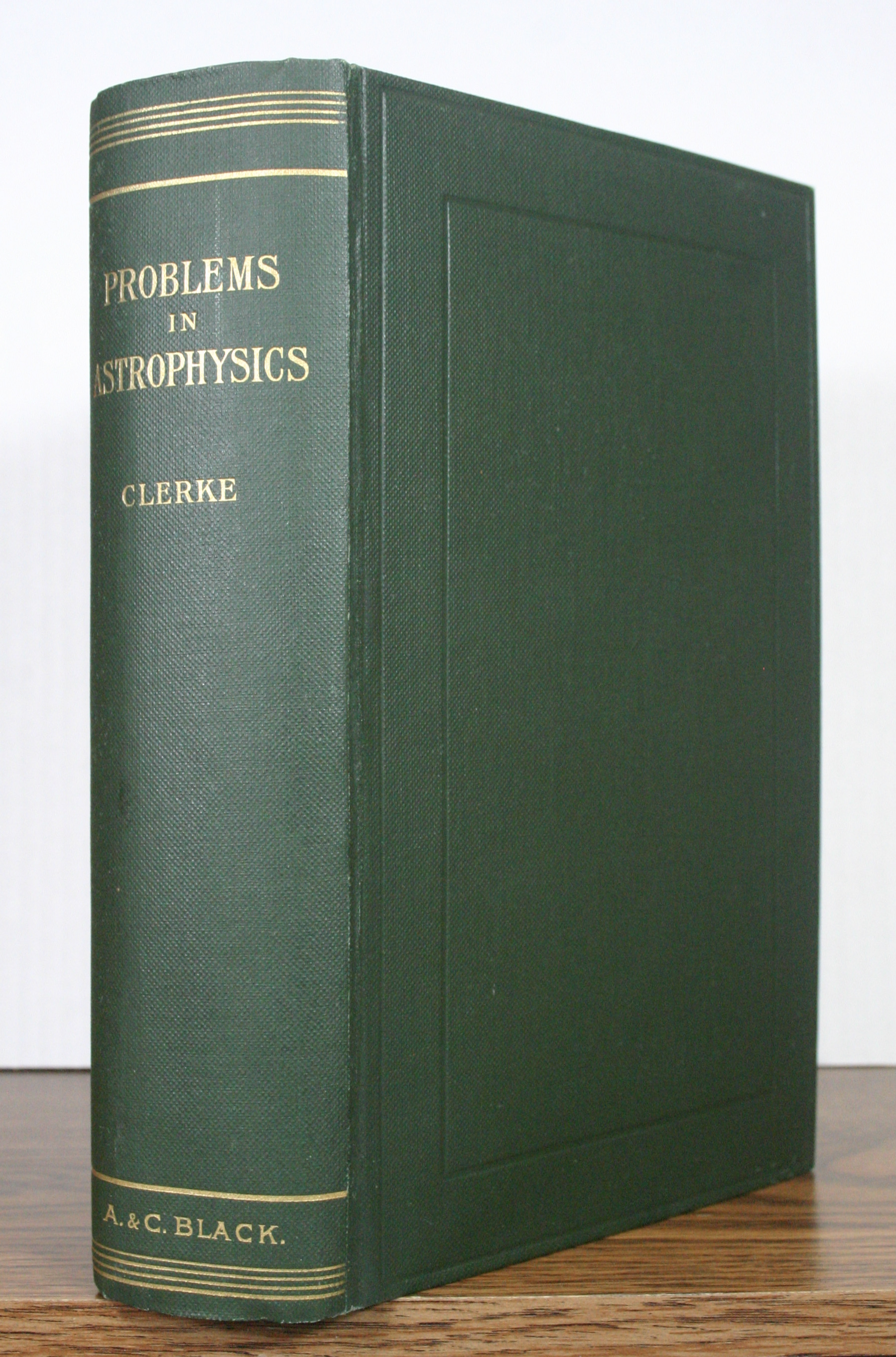 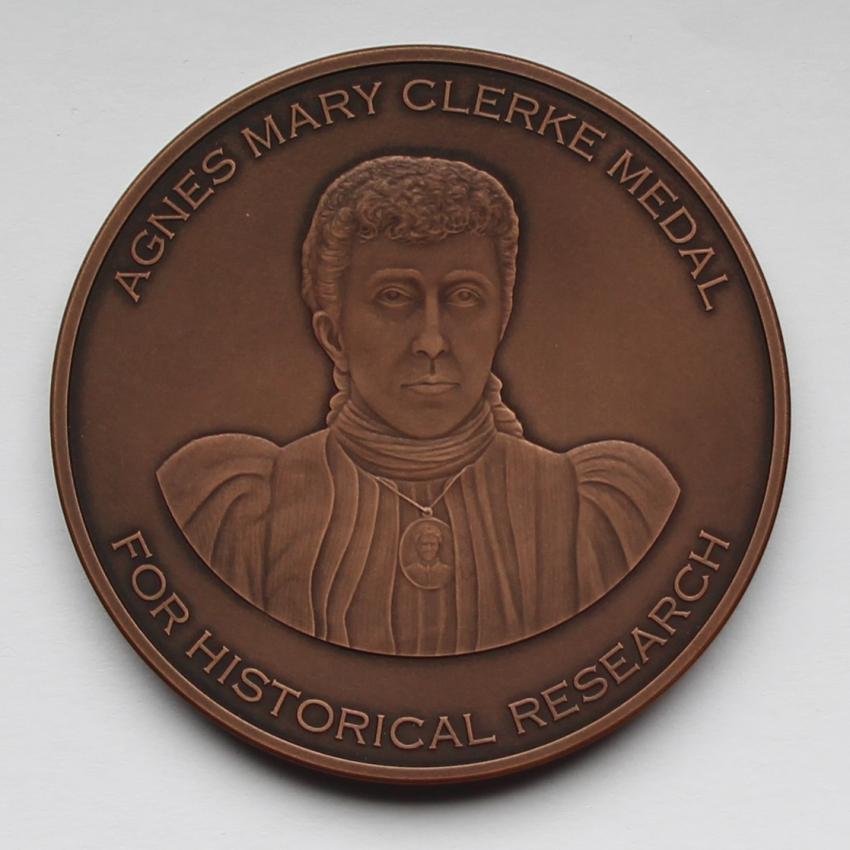 Fig. 2: Agnes Mary Clerke Medal for Historical Research. Image courtesy of the Royal Astronomical Society. Clerke was inducted as an honorary member at the April 1903 meeting. The medal is awarded every three years. The next will be announced on 13 January 2023. Nominations will open again in April 2025.

This Month in Astronomical History: November 2022

2 Nov 2022
In this column from the AAS Historical Astronomy Division, Ken Rumstay of Valdosta State University writes about the first extra-terrestrial roving robot.