This Month in Astronomical History: November 2022

Each month as part of this series from the AAS Historical Astronomy Division (HAD), an important discovery or memorable event in the history of astronomy will be highlighted. This month's author, Ken Rumstay of Valdosta State University, writes about the first extra-terrestrial roving robot. Interested in writing a short (500-word) column? Instructions along with previous history columns are available on the HAD web page.

Ten years and three months ago planetary scientists held their breath as they anxiously awaited the first signals from the Mars Curiosity rover. It wasn’t the first martian rover (three had preceded it), nor would it be the last. Nor was Mars the first extraterrestrial world to welcome a robotic vehicle!

The Soviet Union’s Lunokhod rover was originally designed to support its manned lunar landing program. The plan was to send two Lunokhods in advance to the planned site of a manned landing.1 They would survey the terrain and, when the time came, serve as radio beacons to facilitate a precision landing by the manned craft. But of course, the Soviets lost the race to the Moon.

The Soviet N1 launch vehicle, a complex five-stage design with thirty engines in its first stage, never flew successfully. The first attempt, on 21 February 1969, ended with the vehicle exploding at an altitude of 12 kilometers.2 A second attempt on 3 July 1969 resulted in the destruction of the rocket and the entire launch complex; the explosion occurred less than 200 meters above the launch pad. This delayed the N1 program for two years, and the next two flight attempts in 1971 and 1972 also ended in failure. In May 1974 the lunar N1 program was canceled. Of course, the entire Soviet manned lunar program was shrouded in secrecy, and the West didn’t learn about it until the demise of the Soviet Union in 1991.

After the Apollo 11 landing on 20 July 1969, the Soviet Union decided to achieve a lunar “first” by repurposing the Lunokhods to operate as the first remotely controlled vehicles on another world. Lunokhod 1 was carried to the Moon atop the Luna 17 probe, launched on 10 November 1971 from the Baikonur Cosmodrome. The spacecraft softly landed on the Moon on the 17th, and the rover payload descended to the lunar surface by means of a ramp.

Lunokhod 1 consisted of a tub-like compartment that rode on eight independently powered wheels (Figure 1). Measuring 2.15 meters long and 1.35 meters high, with a wheelbase of 1.6 meters,3 it weighed 1850 pounds (on Earth; only 307 pounds on the Moon). It was equipped with the following instrumentation:

Lunokhod I’s mission lasted 322 Earth days (approximately eleven lunar days), nearly four times its expected operational lifetime. During that time it made 11 daytime excursions, totaling 10.5 kilometers. The rover would travel during the lunar day, stopping occasionally to recharge its batteries using its solar panels, and hibernate during the lunar night. Its eight wheels could turn forward and backward at two speeds but could not pivot; the vehicle turned like a bulldozer, with the wheels on one side stopped while those on the other side turned. The trail left in the lunar dust seen in Figure 2 shows the abruptness of such a cornering scheme.

By any measure, Lunokhod 1 was a great success. During its eleven-month mission, it returned more than 20,000 television images and 206 high-resolution panoramas, operated its penetrometer at roughly 500 different sites, and performed 25 soil analyses with its X-ray fluorescence spectrometer. It was, to a large extent, a propaganda victory for the Soviet Union. Its story was reported in news media around the globe, and it was commemorated on a number of postage stamps (Figure 3; for more information about philatelic and numismatic tributes to spaceflight and astronomy see the article by Mike Marotta in the October 2022 issue of HAD News).

The last radio transmission from Lunokhod 1 was received on 14 September 1971. Its exact final resting place within Mare Imbrium remained uncertain for four decades; then on 17 March 2010, Albert Abdrakhimov identified both the Luna 17 lander and the rover in an image from the Lunar Reconnaissance Orbiter.4

Raymond Watts, Jr. reported on the Lunokhod I mission in the March 1971 issue of Sky and Telescope.5 He concluded his article by stating:

"The success of Lunokhod I makes it very likely that more of these remotely controlled vehicles will soon be roving over the moon. And Soviet space spokesmen are already mentioning the possibility of planetokhods and of fully automatic moon cars that could be sent into the farther hemisphere."

The term "planetokhod" did not enter common usage, and the next three vehicles to be driven on the Moon were not robotic but were controlled in situ by the astronauts of the Apollo 15, 16, and 17 missions (Figure 4). With no time delay and a top speed of 18 kilometers per hour (nine times that of Lunokhod 1), these Apollo missions covered much greater distances.

Only three more robotic rovers would be sent to the lunar surface. On 15 January 1973 the Luna 21 spacecraft deposited Lunokhod 2 (an improved model) in Le Monnier crater. It traveled a total of 36.4 kilometers during a mission that lasted approximately four months; barely outdistancing the 35.9 kilometers driven by the Apollo 17 crew, it yielded another record for the Soviet unmanned space program. It is now in private hands; both Luna 21 and Lunokhod 2 were purchased for the sum of $68,500 at a Sotheby's auction in December 1993 by space tourist Richard Garriott (son of the astronaut Owen Garriott). Both spacecraft remain on the lunar surface, and the private ownership of artifacts on another world has raised several issues in the field of space law.6

Much more recently China landed the Yutu and Yutu-2 lunar rovers in 2013 and 2019, respectively. Unfortunately, the first Yutu rover became immobilized after its second lunar night and traveled only 115 meters, though it continued to gather data until the end of July 2016. The Yutu-2 vehicle is still in service; it holds the record for being the longest-lived lunar rover and is the first to traverse the lunar far side. 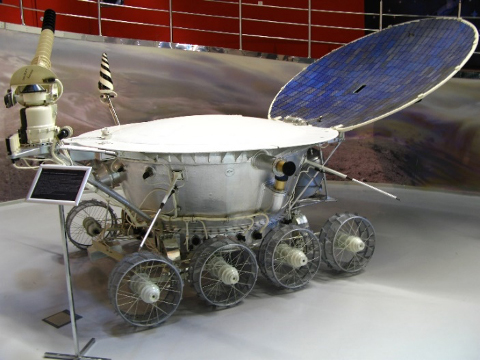 Fig. 1: Full-size replica of Lunokhod 1, on display in the Memorial Museum of Cosmonautics in Moscow. (Image by Petar Milošević, reproduced courtesy of Wikimedia Commons) 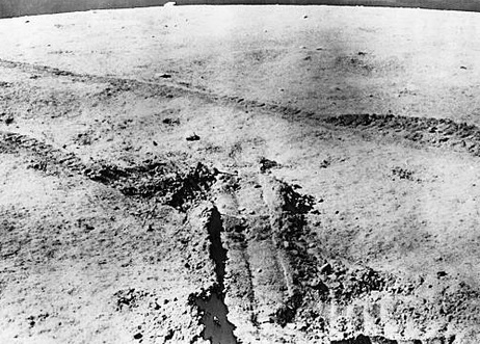 Fig. 2: This backward-looking image from Lunokhod’s camera shows the trail it left in the lunar soil. (Image courtesy Reference 5)

Fig. 3: Some of the postage stamps issued to commemorate the Luna 17 Lunokhod mission. (Items from the author’s collection) 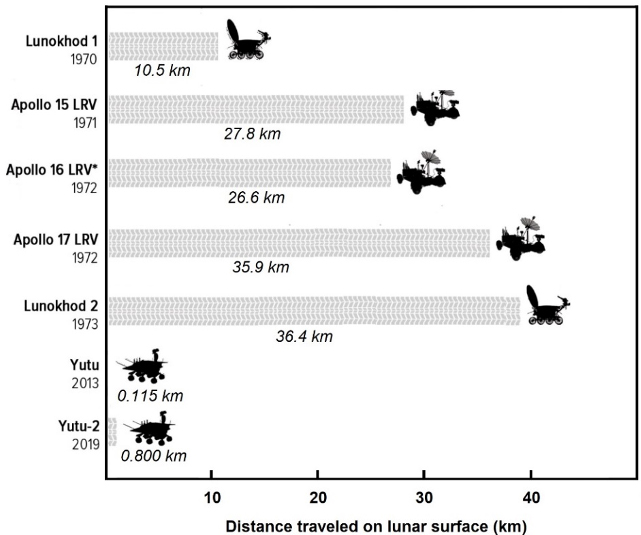