This Month in Astronomical History: July 2022

Each month as part of this series from the AAS Historical Astronomy Division (HAD), an important discovery or memorable event in the history of astronomy will be highlighted. This month's author, Aneka Kazlyna, writes about the publication of Sir Isaac Newton’s Principia Mathematica. Interested in writing a short (500-word) column? Instructions along with previous history columns are available on the HAD web page.

On 12 July 2022, Isaac Newton’s manuscript of revisions to the first edition of his magnum opus, Philosophiæ Naturalis Principia Mathematica (The Mathematical Principles of Natural Philosophy), was sold at Christie’s in London for approximately $2,350,000. It is one of a handful of rare and highly important literary works that have sold for such a staggering price. The edits open a window to Newton’s intellectual thought, the breadth of his scientific expertise, and the depth of his methodologies.

A previous sale of a Principia Mathematica manuscript bound in decorated goatskin and containing engravings of cometary orbits, sold for $2,517,000 in 2013.That one was the only known copy which was presented to King James II (1633–1701). Astronomer and mathematician Edmond Halley (1656–1742) presented this edition of Newton’s Principia Mathematica to the king in July 1687. Halley wrote (Fig 2):

"And I may be bold to say, that if ever book was worthy the favourable acceptance of a Prince, this, wherein so many and so great discoveries concerning the constitution of the Visible World are made out, and put past dispute, must needs be grateful to your Majesty especially being the labours of a worthy subject of your own."1

Additionally, Halley gave a general account of the book and a summary of Newton’s explanation about tides, a subject carefully chosen by Halley to appeal to King James, a former Lord High Admiral.

This manuscript includes corrections and notes by Newton’s friend and collaborator, Scottish astronomer and mathematician David Gregory (1659–1708), who was an important commentator on Newton’s text. In particular, it contains diagrams labeled by Gregory and three passages on the recto that were lightly crossed out by Newton. The manuscript highlights the deep engagement between Newton and Gregory.

In 1684, Gregory wrote to Newton about his (Gregory’s) publication of Exercitatio Geometrica. Gregory also wrote to Newton thanking him "for having been at the pains to teach the world that which I never expected any man should have known."3 Gregory first met Newton in person during the summer of 1691 and impressed him enough to gain his recommendation, ahead of Halley, for the Savilian professorship of astronomy at Oxford. Gregory had been studying the Principia Mathematica closely since its publication in 1687 and played an important role in the revival of the second edition. In May 1694, Gregory visited Newton and they began intense discussions about the Principia Mathematica.

The conversation spurred a sustained correspondence between the two over the next few months that left its mark on the currently displayed manuscript. In the text, there is an important section on the calculation of the orbit of a comet. It highlights the significant confirmation of Newton’s idea of universal gravitation and its application to comets. His results were in agreement with observational data. Ultimately, the intended new edition of the Principia Mathematica (including the passages in this manuscript) was not published.4 Instead, a different second edition was brought out in 1713 through the work of Roger Cotes and Richard Bentley.

These rare manuscripts at Christie’s are significant because they demonstrate the development of Newton’s ideas. They highlight the culmination of his expertise across various areas of natural philosophy and mathematics. Newton’s life was commensurately extraordinary, but the publication of his famous text, despite its current substantial price, was not without difficulty. In fact, it was at one point, unlikely to have been published at all.

The Royal Society, which would be its publisher, had significant financial problems brought on by the miserable sales of John Ray’s and Francis Willughby’s book, De Historia Piscium (The History of Fishes) (1686).6 It was even such that they had to pay Halley’s salary in copies of the failing book. There were also long-standing disputes between Newton and Robert Hooke. Their animosity towards each other was not new and had caused problems for Newton in the past. In fact, Newton’s famous words that if he had "seen further, it was by standing on the shoulders of giants" was a mocking remark towards Hooke himself. Ultimately, it was at Halley’s expense that the Principia Mathematica was finally published in July 1687.

Newton’s Principia Mathematica is significant also because of its explanation of his methodology for scientific inquiry. In the second edition, Newton added the General Scholium, which contains a methodological and philosophical pronouncement that has been highly debated:

"I have not as yet been able to deduce from phenomena the reason for these properties of gravity, and I do not feign hypotheses. For whatever is not deduced from the phenomena must be called a hypothesis; and hypotheses, whether metaphysical or physical, or based on occult qualities, or mechanical, have no place in experimental philosophy. In this experimental philosophy, propositions are deduced from the phenomena and are made general by induction. The impenetrability, mobility, and impetus of bodies, and the laws of motion and the law of gravity have been found by this method. And it is enough that gravity really exists and acts according to the laws that we have set forth and is sufficient to explain all the motions of the heavenly bodies and of our sea."9

With an attack on the Cartesian theory of vortices, which is incompatible with Kepler’s laws, Newton justified his position on methodological grounds. He declared that although he had not found the cause of gravity, he had sufficiently demonstrated its existence. In his correspondence with Roger Cotes, he explained that "the word 'hypothesis' is here used by me to signify only such a proposition as is not a phenomenon nor deduced from any phenomena but assumed or supposed without any experimental proof."10 The underlying ontological order of Newton’s method was founded in mathematical reasoning rather than with speculative hypotheses. For Newton, the crucial element is that certainty is only attained through means of mathematical reasoning which expresses the concrete analysis of phenomena.

Newton was highly successful in his career beyond the publication of the Principia Mathematica. After Hooke’s death, Newton was made president of the Royal Society. He even served the role of Warden and Master of the Royal Mint. His friends and colleagues described him as "insidious, ambitious, excessively covetous of praise, and impatient of contradiction."11 His manuscripts are as much a testament to who he was as it is to what knowledge they contain. The monetary valuation of the manuscripts at Christie’s may be significant, but their actual societal and scientific value is much higher. It is upon Newton’s shoulders that we undertake the ventures of scientific progress today. 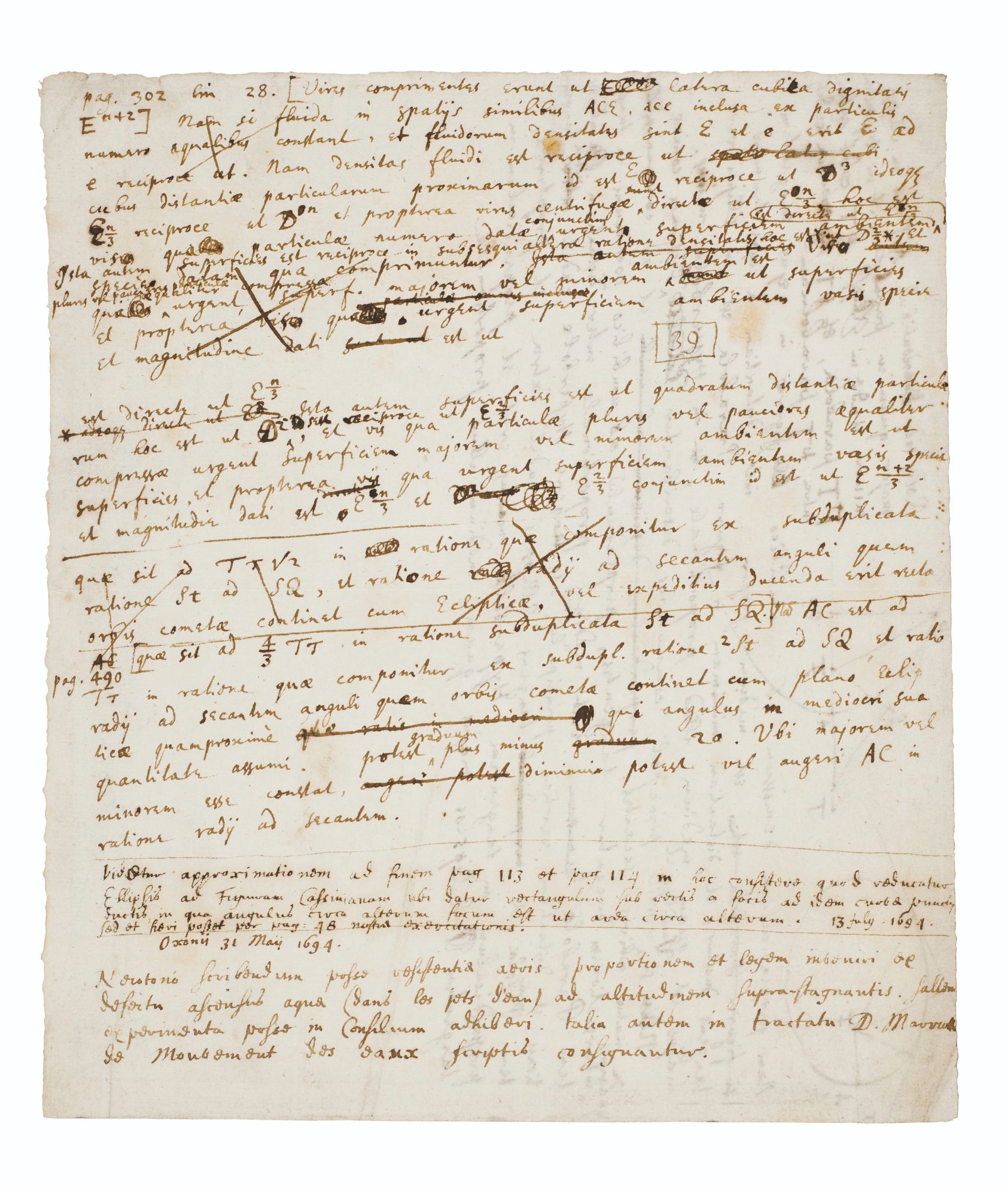 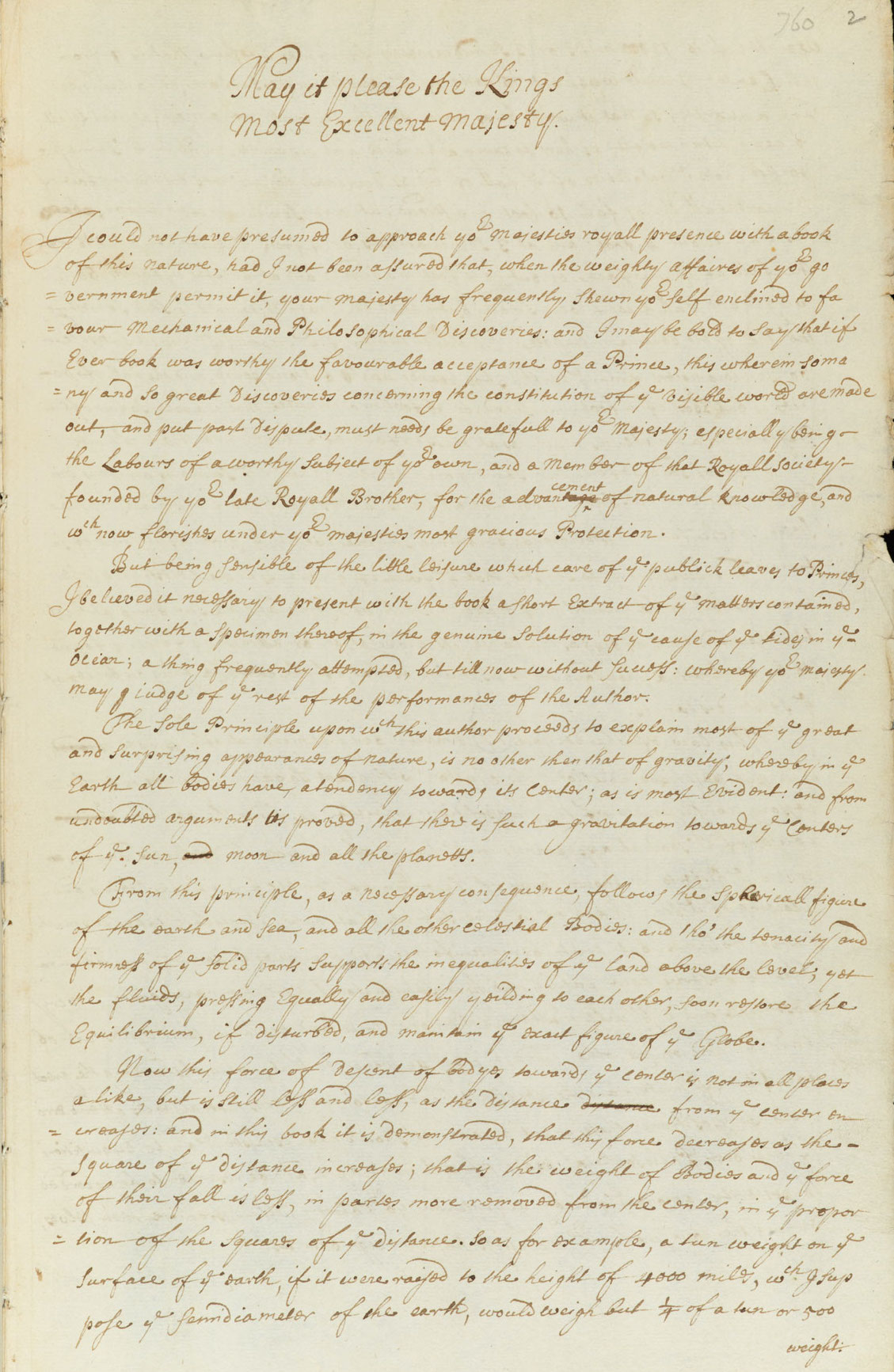 This Month in Astronomical History: June 2022

21 Jun 2022
In this column from the AAS Historical Astronomy Division, Michael E. Marotta writes about Riccardo Giacconi and the beginnings of X-ray astronomy.

26 May 2022
In this column from the AAS Historical Astronomy Division, Rick Fienberg, who recently retired after serving 12 years as AAS Press Officer, writes about the first telescope on the Moon.