This Month in Astronomical History: June 2022

Each month as part of this series from the AAS Historical Astronomy Division (HAD), an important discovery or memorable event in the history of astronomy will be highlighted. This month's author, Michael E. Marotta, writes about Riccardo Giacconi and the beginnings of X-ray astronomy. Interested in writing a short (500-word) column? Instructions along with previous history columns are available on the HAD web page.

Scorpius X-1 and the Launch of X-Ray Astronomy

At one minute before midnight on 18 June 19621, a failed experiment led to the discovery of X-ray stars and, ultimately, to the awarding of a Nobel prize to Riccardo Giacconi in 2002. Instruments aboard an Aerobee sounding rocket launched from White Sands Missile Range detected the first X-ray star, later designated Scorpius X-1. The experiment was intended to measure solar X-rays reflected from the Moon. None were found. What was revealed was a source of X-rays a million times more powerful than any predicted expectation based on earlier measurement of X-rays emitted by the Sun, opening a new frontier of astronomical exploration and discovery.2

Earth’s atmosphere blocks X-rays. Were that not true, life on Earth would be different (if possible, at all), and we evolved incapable of perceiving X-rays directly. However, the necessary existence of solar X-rays was predicted. Led by Herbert Friedman, a team from the U.S. Naval Research Laboratory had been extending measurements of solar X-rays using balloons and sounding rockets. Beginning in 1948, their work spanned two solar sunspot cycles and included the solar eclipse of 12 October 1958.3,4 Among the other researchers also pursuing solar X-rays were two NASA-funded teams at Lockheed.5

As intense as that competition was, astronomers had been slow to conceptually integrate X-rays into their understanding of stellar processes. X-rays had been verified and announced by Wilhelm Conrad Röntgen in 1895. A search of the SAO/NASA Astrophysics Data System (ADS) for the terms "solar X-rays" and "stellar X-rays" between 1896 and 1945 returned only twelve publications. Within them, speculations about X-rays were tangential, at best. One paper by the historian and mathematician Florian Cajori stands out. In 1896, while teaching at Colorado College where he held the chair in physics, he arranged for photographic plates to be set up on Pike’s Peak (elevation 14,147 feet) and Rosemont Park (elevation 9,200 feet). Cajori had already determined that solar X-rays were probably blocked by our atmosphere and may well be rare emissions. So, two exposures over 120 days (27 June to 10 August on Pike’s Peak and 7 July to 28 August in Rosemont Park) were necessary. Cajori’s experiment found no solar X-rays.6 That was where matters lay until the development of powerful rockets allowed investigation of the upper atmosphere.

The first observation of solar X-rays is accepted to have occurred on 5 August 1948, when T. R. Burnight of the Naval Research Laboratory placed photographic emulsions aboard an Aerobee rocket making an altitude of 95 miles and recording soft X-rays. However, Burnight did not pursue the experiment further.7 Herbert Friedman and his colleagues took the lead. In their decade of exploration, they launched a battery of six sounding rockets to measure radiation in the upper atmosphere during the solar eclipse of 12 October 1958. Friedman’s team at the Naval Research Laboratory had measured solar X-ray flux at 1 erg per square cm per sec within a total flux of 6.25 ✕ 1010 ergs per square cm per sec.4 Any detector of stellar X-rays would by necessity be extremely sensitive.

Friedman did not attend the Smithsonian Astrophysical Observatory conference on X-ray astronomy held in Cambridge, Massachusetts, on 20 May 1960, and Riccardo Giacconi only learned about his work later by reading an English translation of a Russian paper summarizing the state of the art.

"I was unaware of the work by H. Friedman and his colleagues of the Naval Research Laboratories (NRL) on X-ray emission from the Sun, which had been proceeding for more than a decade using captured V-2 rockets. This work prompted discussions that had taken place at the Space Science Board (of which Bruno Rossi was Chairman) in 1958 and 1959. The discussions, which included contributions by John A. Simpson, Lawrence H. Aller, and Leo Goldberg, had come to the conclusion that X-ray observations appeared to be an interesting way to study high-energy radiation from stars. Furthermore, Malcolm Savedoff at Rochester and Philip Fisher at Lockheed had responded to the solicitation of James Kupperman of NASA to carry out experiments in X-ray astronomy as early as June 1959 (Savedoff) and August 1960 (Fisher)."8

Giacconi already had been hard at work on the many technical problems associated with capturing stellar radiation. From an American perspective, it was anomalous that he had been granted his doctorate in physics in 1954 by the University of Milan. Before entering the university, he previously showed no special aptitude for physics.9 Also, in a tradition rooted in the first universities, the Italian program was a challenging four-year doctorate without antecedent undergraduate degrees. However, he was confident in his ability to intuitively grasp the truth more securely than most of his teachers. Two exceptions were his mentors: Antonio Mura, with whom he discussed the then-current literature on cosmic rays, and Carlo Succi, whom he regarded as a talented instrumentalist with a highly practical mind.9 Working with Succi, Giacconi designed and built an array of electronic counters and cloud chambers. For his doctoral thesis, Giacconi installed a cloud chamber on the Matterhorn, gathering a scant 80 cosmic ray proton events over two years.9 The paucity of available data informed his later designs.

The key to the instrumentation which detected the emissions was an anti-coincidence counter. A Geiger counter is sensitive to other wavelengths of radiation as well as X-rays. However, the reactive gas in the Geiger counter stops X-rays. Therefore, another scintillation counter stacked in parallel records both forms of energy, and the one measurement is (electronically) subtracted from the other, with X-rays as the residual tally.9

Designed to detect feeble solar X-radiation reflected from the Moon, the X-ray telescope aboard the Aerobee rocket launched on 18 June 1962 measured the X-ray flux at 5 photons per second per square cm.1 That source, Scorpius X-1, is still held to be the most powerful single emitter of X-rays in our galaxy. The star V818 — the visible companion feeding Scorpius X-1 — was later found on photographs from 1896 to 1949 that were archived in the Harvard collection.10,11

Long an admirer of American culture, Giacconi was an assistant professor of physics at Milan (1954–1956) when he took the advice of his fourth-year professor, Giuseppe Occhialini, to "go West, young man," and he was granted a Fulbright Fellowship to study at Indiana University at Bloomington.9 From Bloomington, he traveled to Princeton (1958–1959) to work as a research assistant in at their Cosmic Rays Laboratory.12 Then, with his visa about to expire, he accepted an opportunity to join American Science & Engineering, a private think tank founded by Massachusetts Institute of Technology professors. At an evening dinner party, the chairman of the board, Bruno Rossi, took Giacconi aside to suggest that he consider the potentials offered by the new frontiers in X-ray astronomy. Among the many problems was the lack of adequate instrumentation.9

While working on the technical details of an X-ray telescope, Giacconi was aware of the promise it held for the science of astronomy. Speaking at the first conference dedicated to X-ray astronomy on 20 May 1960, held at the Smithsonian Astrophysical Observatory in Cambridge, Massachusetts, Giacconi said: "I would like to comment on the processes involved in X-ray emission. Until now, we have examined the Sun and its peculiar type of emissions as if it were the norm for all other stars. However, the various processes by which X-rays are produced in different amounts — collision bremsstrahlung, magnetic bremsstrahlung, Cerenkov radiation, as well as K ionization — would lead to large variations in the X-ray flux to be expected from different stars. X-ray astronomy, in other words, is of broader interest than the astronomy of optical emission, and we would expect to see different objects in many cases than those identified only by their visible light."13 And so it proved to be. X-ray astronomy rapidly expanded into a special field of investigation in its own right.

"… X-ray astronomy has evolved at an enormous pace. The number of known sources has increased by a factor of a thousand, but more important, they now comprise almost all classes of astronomical objects — from planets, moons, and comets out to clusters of galaxies and quasars. In the era of multi-wavelength astronomy, X-ray observations provide insight into extreme physical conditions prevailing in all these sources — very high temperatures, very strong gravitational fields, super-nuclear densities, extreme concentrations of relativistic particles."14

Scorpius X-1 continues to be the subject of investigation. See, for example: 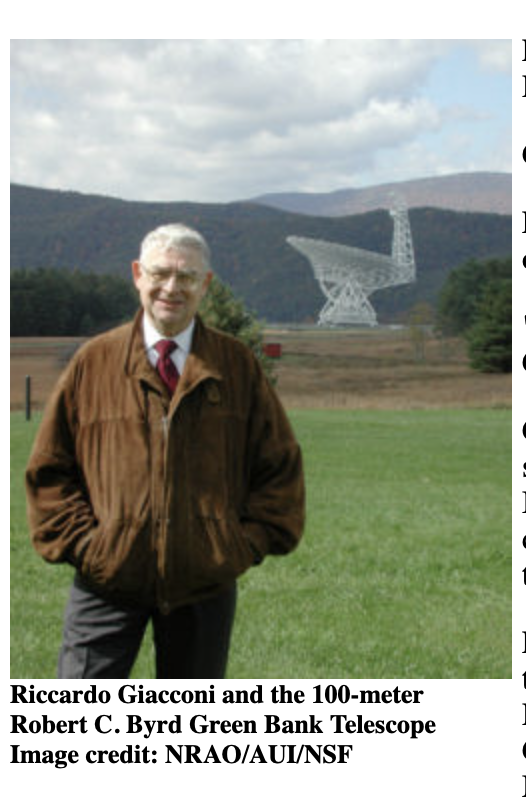 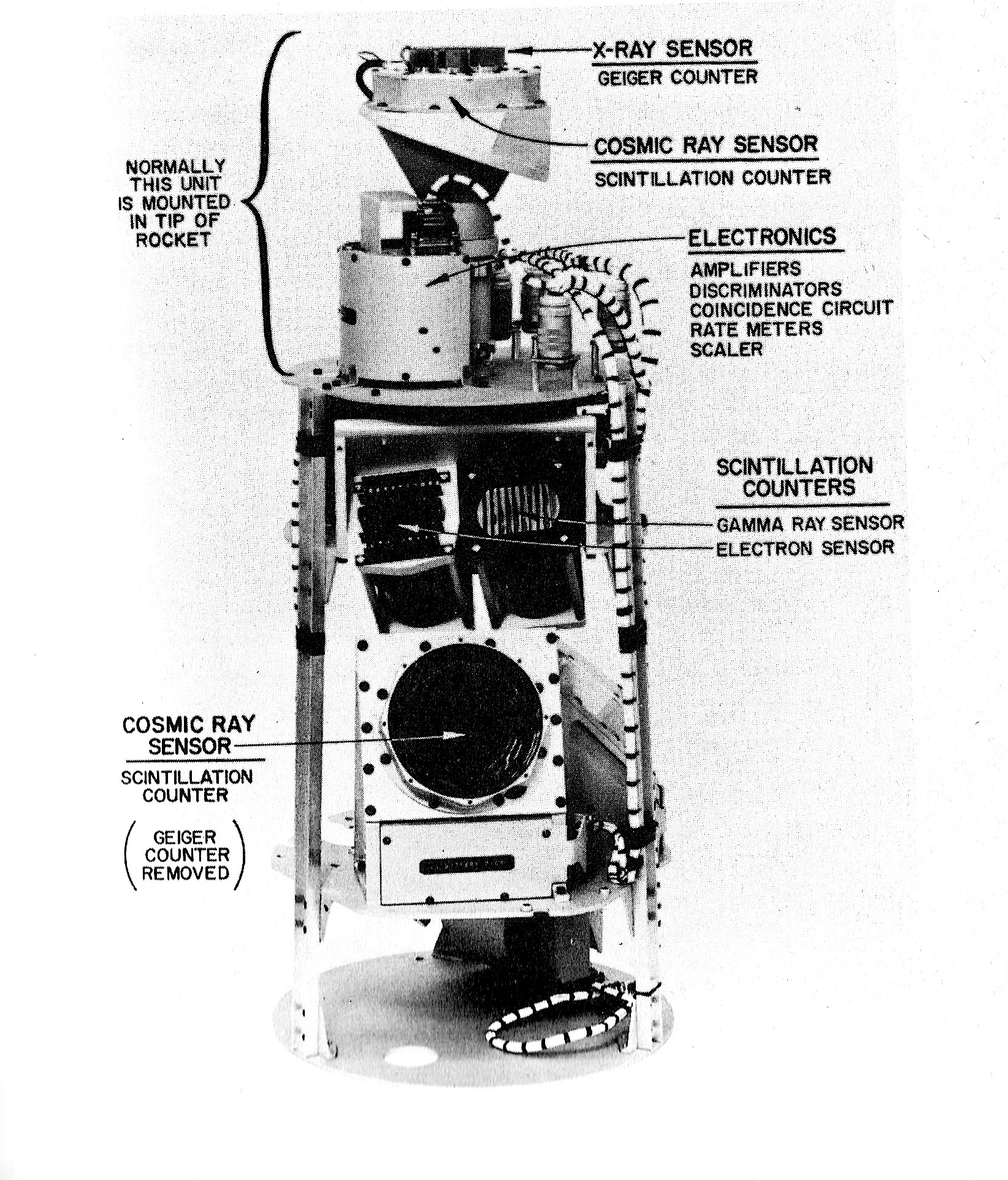 26 May 2022
In this column from the AAS Historical Astronomy Division, Rick Fienberg, who recently retired after serving 12 years as AAS Press Officer, writes about the first telescope on the Moon.

4 Apr 2022
In this column from the AAS Historical Astronomy Division, Stephen Spears, formerly with the Cleveland, Ohio, public schools, writes about the career of Cecilia Payne-Gaposchkin.