Each month as part of this series from the AAS Historical Astronomy Division (HAD), an important discovery or memorable event in the history of astronomy will be highlighted. This month's author, Michael E. Marotta writes about the discovery of the strong magnetic field between Earth and the Moon. Interested in writing a short (500-word) column? Instructions along with previous history columns are available on the HAD web page.

Probing the Limits of the Earth’s Magnetic Field

Following the launch of Sputnik 1 on 4 October 1957, the USA and the Union of Soviet Socialist Republics (USSR) engaged in a “space race.” At stake was military control of orbital space, the Moon, and beyond as operational theaters, but also the prestige of scientific advancement that each could attribute to the superiority of its economic system. On 12 February 1961, the USSR sent Venera 1, equipped with several scientific instruments to Venus as another step in their accelerating space program. On 25 March 1961, the USA launched Explorer 10, whose instruments would gather data about charged particles and magnetic fields between Earth and the Moon.1,2,3

Riding atop a Thor-Delta-Altair three-stage combination, the cylindrical, battery-powered 35-kg Explorer-10 satellite (also designated P-14 and 1961 Kappa 1) was injected into a highly eccentric orbit, whose apogee of 246,000 km (148,000 miles) carried it into cislunar space. The perigee was 166 km (100 miles). On 28 March 1961, NASA’s Explorer 10 satellite discovered a strong magnetic field halfway between the Moon and Earth, demonstrating how the solar wind shapes Earth’s magnetosphere into an elongated “teardrop” extending away from the Sun. This was also the first satellite to detect and measure the shock wave advanced by a solar flare.3

Five instruments comprised the scientific payload: a Faraday cup plasma probe to capture charged particles; three magnetometers (a rubidium vapor and two fluxgates); and an aspect sensor to visually detect the Sun, Moon, and Earth.4 An official NASA report described the sun-moon-earth sensor as having “a fan field of vision, 3 degrees wide and 120 degrees long, which swept through the sky as the probe rotated in space. The appearance of the moon or earth in the field of view of the sensor caused a step change in subcarrier frequency. The sun part of the sensor consisted of a digital coded slit 2 degrees wide and 100 degrees long. The appearance of the sun in the field of view of the slit caused a discrete frequency on the subcarrier which corresponded to the position of the sun in the field of view.”5 The aspect sensor verified that the satellite kept the alignment of its spin vector: right ascension 71° and declination -15°. The orientation was stabilized with a spin period of 0.548 seconds.5

On the ascending arc of its initial orbit Explorer 10 transmitted real-time data for 52 hours. It achieved a distance of 269,569 km (161,741 miles) when NASA received the final useful transmission.3 Two years later, it was declared still in orbit, but location unknown and communications failed.6

A later probe in the same series, Explorer 33, discovered that the tail gradient of the geomagnetic field extends at least 40,000 km beyond the Moon’s orbit.7 Moreover, the period of the flux is at maximum for seven days each month, and subsequent computer models suggest that it can shield humans working on the Moon for long duty cycles.8 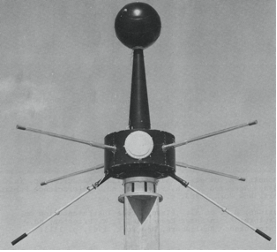 17 Feb 2021
In this column from the AAS Historical Astronomy Division, Dr. Linda Shore, Chief Executive Officer of the Astronomical Society of the Pacific, writes about the ASP’s creation and growth.

1 Feb 2021
In this column from the AAS Historical Astronomy Division, Michael E. Marotta writes about a January conjunction of Galileo Galilei and Edwin Hubble.