The existence of harassment and discrimination in academia has been well documented across a variety of fields of study. A report from the American Institute of Physics goes beyond the numbers to examine types of harassment experienced by members of the astronomy community over the span of a decade, highlighting the pervasiveness of the issue. 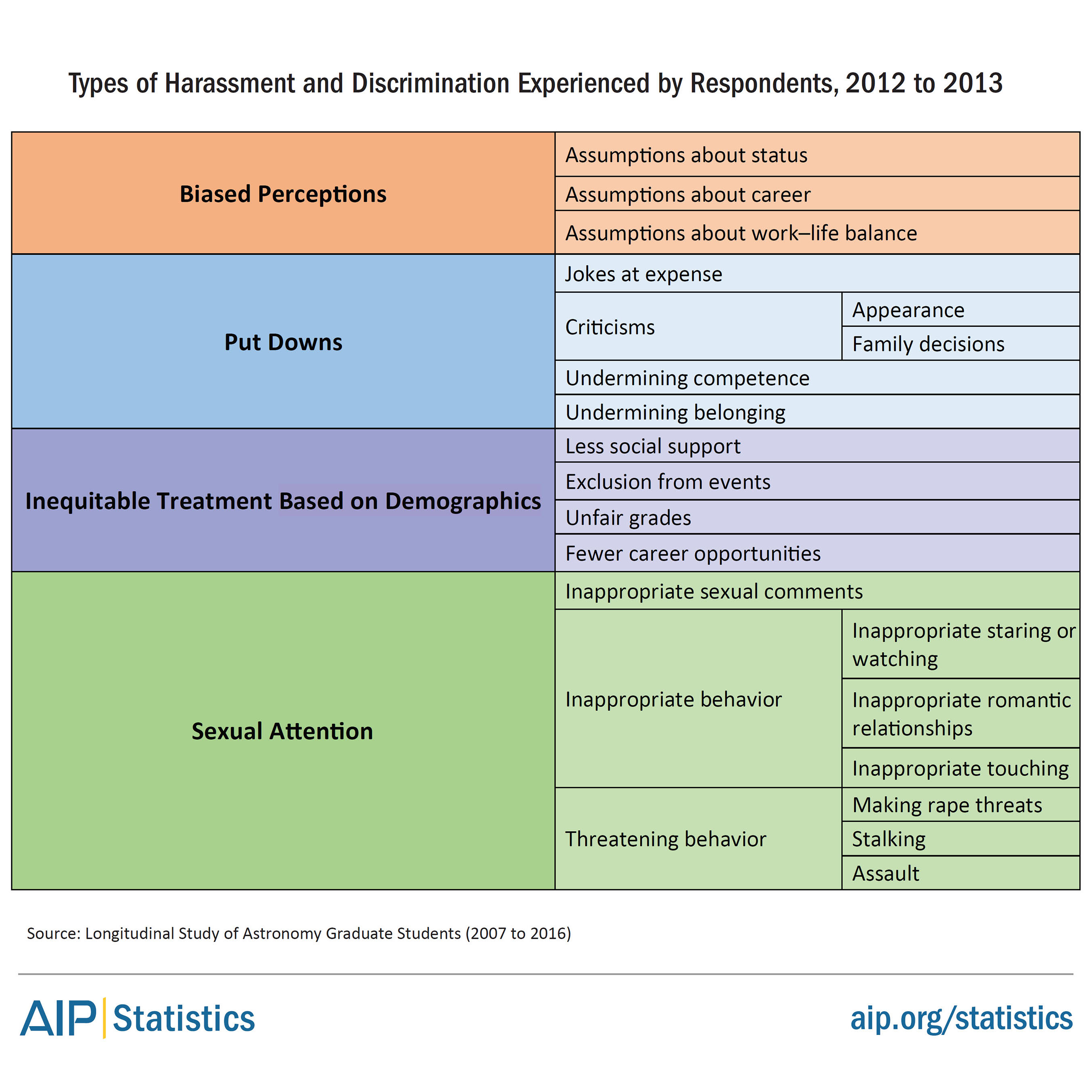 The AIP Longitudinal Survey of Astronomy Graduate Students was initiated by the American Astronomical Society (AAS) in 2006 to better understand the forms and long-term impacts of harassment in the field of astronomy. The study polled astronomy graduate students during the 2006-07 school year and followed up with those same people in 2012-13 and in 2015-16 after they entered the workplace.

Four types of harassment and discrimination were prevalent in the answers:

The study respondents described incidents of harassment in locations ranging from classroom/seminar settings to academic conferences and social events to workplaces. Many of the incidents were based on gender, but some were based on other statuses like race or socioeconomic position.

Some targets who reported the incidents — either through official or unofficial channels — did not receive support and, in one case, the person was blamed for the reported behavior.

"Strengthening efforts to eliminate all forms of harassment and discriminating behavior, and providing support to those who need it, are essential actions to create a safe and inclusive scientific community for all," said Michael Moloney, CEO of AIP. "This study illustrates that the astronomy community is right to continue to examine and question its culture — and other disciplines can surely draw lessons from this report."

Since the AIP study was undertaken, AAS has implemented several measures aimed at reducing harassment in the astronomy community. The Society adopted a clear Code of Ethics and an Anti-Harassment Policy that governs behavior at AAS-sponsored meetings, publications, and other activities, backed by a complaint process and an Ethics Committee.

It also implemented a site visit program, in which an astronomy department or institute can request an external committee, sent by AAS, to visit, conduct interviews, and assess the climate of the department.

"A poll of recent graduate students is now needed to test our progress," said AAS President Paula Szkody. "Awareness is one critical aspect. Studies like the AIP Longitudinal Survey of Astronomy Graduate Students provide valuable insight into the realities and forms of harassment and discrimination in the field, better positioning us to continue to tackle such behavior as a community."

"Harassment and discrimination can reinforce or realign power differentials in academic work and educational settings," said Ivie. "It is important to question and restructure the organizational settings that enable these behaviors."

About the American Institute of Physics

The American Institute of Physics (AIP) is a 501(c)(3) membership corporation of scientific societies. AIP pursues its mission -- to advance, promote, and serve the physical sciences for the benefit of humanity -- with a unifying voice of strength from diversity. In its role as a federation, AIP advances the success of its Member Societies by providing the means to pool, coordinate, and leverage their diverse expertise and contributions in pursuit of a shared goal of advancing the physical sciences in the research enterprise, in the economy, in education, and in society. In its role as an institute, AIP operates as a center of excellence using policy analysis, social science, and historical research to promote future progress in the physical sciences.

About the American Astronomical Society

The American Astronomical Society (AAS), established in 1899, is a major international organization of professional astronomers, astronomy educators, and amateur astronomers. Its membership of approximately 8,000 also includes physicists, geologists, engineers, and others whose interests lie within the broad spectrum of subjects now comprising the astronomical sciences. The mission of the AAS is to enhance and share humanity's scientific understanding of the universe as a diverse and inclusive astronomical community, which it achieves through publishing, meetings, science advocacy, education and outreach, and training and professional development.