If You Wish to Make an Apple Pie from Scratch, You Must First Invent the Universe

Each year, AAS brings volunteers to Washington, DC, to learn how to advocate for science as part of our Congressional Visits Day (CVD). These volunteers take part in a 1.5-day workshop to learn about the current policy issues important to the astronomical sciences before spending a day on Capitol Hill meeting with their Congress members. In this guest post, Arpita Roy, an Assistant Astronomer at Space Telescope Science Institute, describes her experience at this year's CVD. 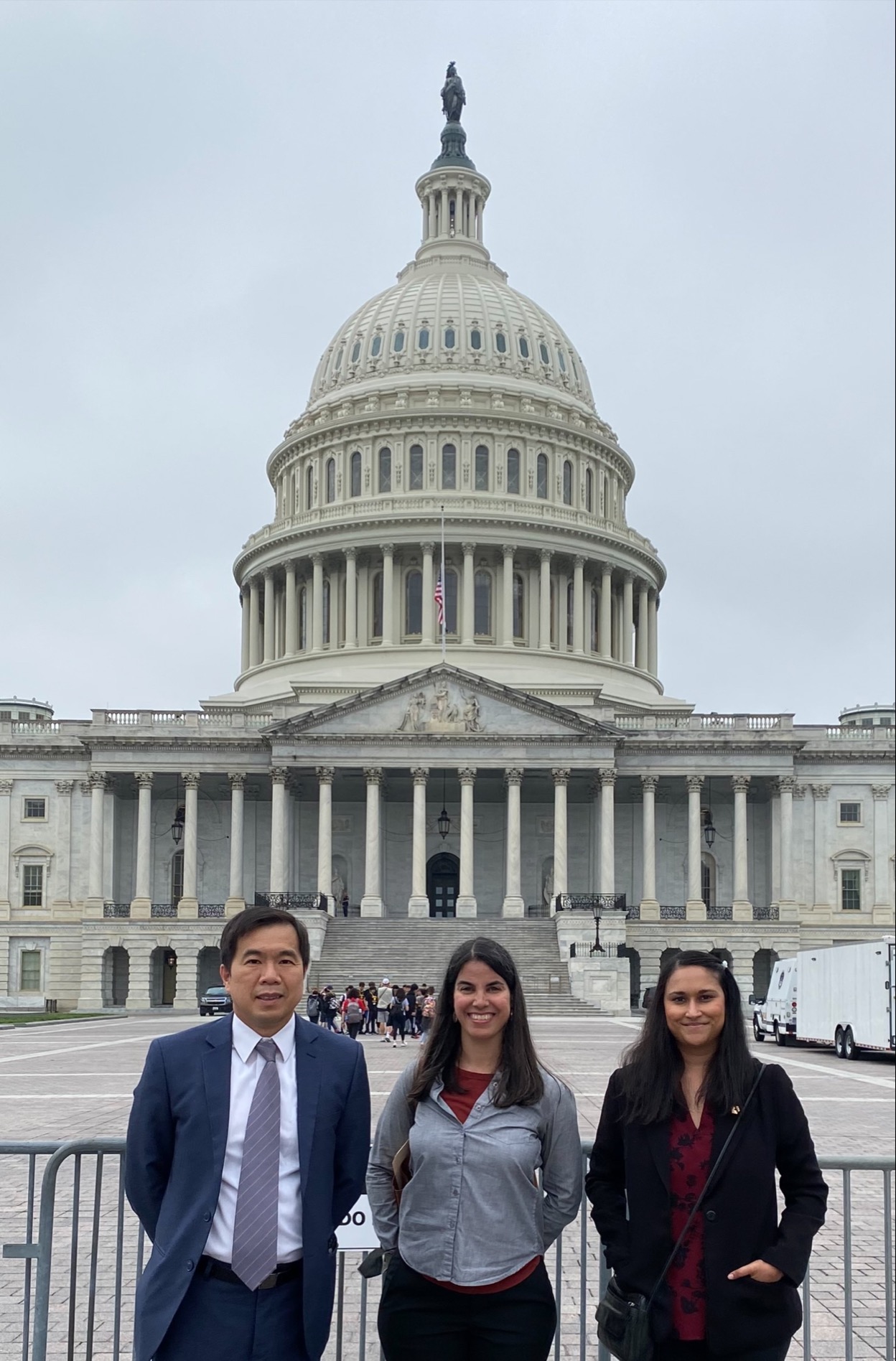 From left to right, AAS members George Ho, Erin Cox, and Arpita Roy in front of the US Capitol building during the 2022 Congressional Visits Day.

When I think of all-American things, several tropes come to mind. Apple pie and the stars and stripes. Baseball and hot dogs. Wide open roads under low-hanging skies. And somewhere in the distance, historic domed buildings on a hill, where people attempt to define and uphold freedom every day. For almost 15 years, as an international student and then professional astronomer in this country, I held these things at arm’s length. I was an onlooker, a long-term tourist, only dabbling in American-ness. And then, at the onset of the pandemic, I stood with a few thousand people on a sunny day in Los Angeles and officially pledged my fealty to the country of my adoption.

Starting out as a young international student, I don’t think I ever fully appreciated the ways in which federal funding was the foundation of my career. As far as I could tell, I was funded by my undergraduate and graduate advisors (who were actively applying for National Science Foundation (NSF) and NASA grants in the background!). As I’ve progressed through career stages, all the way to now funding my own students, I can see much more clearly how things work at the panels and Principal Investigator level. However, the top of the beanstalk has remained shrouded in mystery. How exactly are the decisions made to fund astronomy at the highest levels? All of us below the clouds take what is handed down and divide it into thin slices. But who decides the size of the pie, and how?

I applied for the 2022 AAS Congressional Visits Day (CVD) as my first foray into the world of US policy. I have always been interested in how the political system — that behemoth shaped by very different principles and priorities — views a field like astronomy, which is relatively small, yet disproportionately popular with the public. As a freshly minted citizen, this was my opportunity to thank the members of Congress for supporting scientific research over the years, and to advocate for continued funding in an era where the James Webb Space Telescope (JWST) sits at L2 and an ambitious Decadal Survey has taken center stage in astronomy. As part of the JWST commissioning team and an exoplanet scientist in quest of habitable worlds, these were both community milestones that I particularly wanted to champion.

We headed to the US capital on a balmy morning in May. Twelve astronomers from across the country and across career levels had been gathered and divided into four geographic zones. Before even stepping into Washington, DC, we had been prepped on “How to Schedule Meetings” and “How the Congress Works,” and had set up meetings with our representatives. Turns out, it is surprisingly easy to contact Congressional offices. Even more surprising, it is a pleasant experience. So really, call your representatives on issues you care about — your opinion will be received with appreciation. And here’s a tip: calling on the phone can get you to the right person much quicker then emailing — Washington is old school!

Then began the two-day marathon of transforming a group of bright-eyed astronomers into somewhat seasoned advocates. We sat at the AAS Headquarters (appropriately masked) and heard from leaders who work at the conjunction of science and politics. We heard from the Decadal Co-Chair Rob Kennicutt, and we asked questions about the initial implementation of the recommendations. We heard from Kathy Turner, a physicist at the Department of Energy (DOE) Office of Science, and we learned that the DOE is an important line item in astronomy funding; in fact, along with NSF, they fund 85% of US high-energy physics and astrophysics programs at universities and national labs. We talked to the NSF Director for the Division of Astronomical Sciences, Debra Fischer, a trailblazer from my own field of exoplanets. We heard about NSF’s challenges in advancing science with existing facilities while keeping an eye on the (often large) environmental impacts, and the importance of advocating for dark and quiet skies. We learned that it's important to ask for increases in specific areas of the NSF budget so that dollars can be spent appropriately, and not to earmark projects (for example, “my constituents want an Extremely Large Telescope”) since that does not come with funding and will eat into existing programs.

There were a lot of quotable quotes and Washington adages over those two days, and I’ll give you some of my favorites. “Do no harm” — a basic tenet of AAS advocacy, which says we are not asking for slices of other people’s pies. We are asking to increase the size of the pie. “All politics is local” — I didn’t quite absorb this one until I saw the giant can of Old Bay in my Maryland Senator’s office. Yes, politics is local because our knowledge and investment tends to decrease quickly with distance, quite like a 1/r2 law. “Flat is the new up” — a hot take on the state of the budget, followed with “at least in astronomy we are going up a little bit.” Many more: “This is a marathon, not a sprint. It is a constant drumbeat.” And the one that gave me goosebumps: “Sitting here, we are the agents of democracy”.

We thoroughly researched our representatives and worked on our messaging. We even roleplayed some meeting scenarios. We finished the two days with a freewheeling panel discussion with scientists who had recently been AAS and American Association for the Advancement of Science (AAAS) Fellows and were now in real-world policy jobs. One of them even turned out to be an old friend from when I was visiting graduate schools a decade ago! Funny, meaningful, and some behind-closed-doors anecdotes later, we felt much more prepared for the upcoming day. These are all going to be regular people, after all, and many of the staffers would be our age or even younger (although extremely capable and usually handling ridiculously broad portfolios). For me and my colleagues, the two days of preparation had dispelled the above-the-clouds nature of astronomy funding. We were ready to step out and make our case.

Despite the fact that our group was from regions closest to DC, most of our meetings were virtual. At the last minute, we managed to get two in-person meetings: one on the Senate side and one on the House side. This was fortunate, since we found out that the buildings were currently closed to the public due to the pandemic. We walked to our meetings past protests based on the leaked Supreme Court opinion the day before. There was a somber note in the air, even as we carried on with our emotionally uncomplicated and mostly bipartisan bid for support of the space sciences.

All our meetings were infused with enthusiasm and energy on both sides. We left behind our carefully designed leave-behinds that specified requested budget increases and mentioned the threat posed by satellite constellations (learn more here). As I walked those halls that day beside my fellow scientists, I felt like I was participating in American-ness for the first time. Policy is made by those who show up, someone had said to us that day, and it felt incredibly empowering to be showing up. I hope we effected a microcosm of change that day, but perhaps more importantly, we came away knowing that those in power had heard our voices. And it didn't feel like the end of an experience, but rather the first step in a lifetime of advocacy for the things we care about as astronomers and human beings.