This Month in Astronomical History: September 2022

Each month as part of this series from the AAS Historical Astronomy Division (HAD), an important discovery or memorable event in the history of astronomy will be highlighted. This month's author, Mike Marotta, writes about Henry and Mary Anna Draper's first photograph of the Orion Nebula, Messier 42. Interested in writing a short (500-word) column? Instructions along with previous history columns are available on the HAD web page.

The Drapers’ First Photograph of Messier 42

On 30 September 1880, amateur astronomers Henry Draper and Mary Anna Palmer Draper succeeded in capturing the first photographic image of Messier 42, the Great Orion Nebula. The Drapers sent out notices to several journals including Nature,1 AAAS Science magazine,2 the American Journal of Science,3 and The Observatory.4 Henry Draper displayed a print at the January 1881 monthly meeting of the Royal Astronomical Society.5

The Drapers continued to refine their techniques and in 1882 Henry Draper published a greatly improved print. Today, the Orion Nebula is perhaps the favorite target among amateur astrophotographers whose modern instruments and image-processing software allow them to easily supersede the first pioneering efforts.

Mary Anna Palmer (1839-1914) benefited from her father’s success in business. The family residence was in Connecticut but, after marrying Henry Draper in 1867, Palmer remodeled her childhood home on Madison Avenue into a laboratory for astronomical research.6,7 Summers were spent at the Drapers’ observatory at Hastings-on-Hudson.8 When they began their work, the Drapers used a wet process for photographic plates which required Anna to prepare and Henry to use the plates in under fifteen minutes. They soon went to dry plate production with Anna managing the plates.

After Henry Draper’s untimely death (at age 45 in 1882), Anna Palmer Draper continued her work in astronomy by funding the original research of others. She established the Draper Medal, underwrote the production of the Draper Catalog by the Harvard Observatory, and maintained her membership in the Astronomical Society of the Pacific.9

Henry Draper’s father, John William Draper, emigrated to the United States from the United Kingdom in 1832. He earned an MD degree from the University of Pennsylvania in 1836 and was appointed chair of Chemistry and Natural Science at Hampden Sydney College. Henry Draper earned his medical degree in 1857 and in 1860 became professor of natural science at the University of the City of New York (now New York University), being appointed dean of the medical faculty in 1866, and retiring from the university in 1882.10

In his reports, Henry Draper referred to "Mr. Rutherford": "… A triple achromatic objective of 11 inches aperture made by Clark & Sons, according to the plan of Mr. Rutherford, for correcting the rays especially for photography." In fact, Draper relied on the work of Lewis Morris Rutherfurd (1816-1892), a lawyer and citizen scientist.

Rutherfurd experimented with photography and spectroscopy, in particular using spectroscopes to improve the performance of lenses for astronomy and astrophotography. To construct his instruments, he developed machines for cutting fine gratings.11,12 Rutherfurd belonged to the affiliation of amateur astronomers who practiced their science before and after academic degrees and institutional employment was common. Many of them published their observations (and conjectures) in Nature, Science, The Observatory, and the monthly notices of peer-reviewed journals. Rutherfurd did not.

As Benjamin A. Gould explained it:

“Notwithstanding the earnest zeal with which Rutherfurd prosecuted his astronomical and physical observations — keeping pace with the advances of celestial discovery — his modest disposition prevented him from publishing his results and thus taking the position properly belonging to him among investigators. It was not until the year 1862 that he published his first astronomical paper, a letter dated 1862 July 28, confirming Clark's discovery, with his new 18-½ inch object-glass, of the companion of Sirius and giving measures of its position on seven dates, from March 11 to April 10 of that year.” (Gould, page 421)

Finally, Rutherfurd explained his technique in the American Journal of Science, issue 103, pp. 71-77 (December 1862, published January 1863). Again, according to Gould:

“In his paper of December, 1862, he had called attention to the peculiar adaptability of the spectroscope for investigating the achromatism of an object-glass and spoken of his intention to employ this device for determining the photographic focus of his telescope. The form of the spectrum from a star or any point of white light shows at once what colors are, and what are not, brought to a sharp focus; since in the one case it is simply a line, but in the other its width is expanded to that of the cone of rays where intercepted by the prism. Experimenting with the aid of this fact, he found that a good practical focus for the chief rays needed in celestial photography was attainable by separating the crown and flint lenses by such an interval that the focal length of the combination should be about one-twentieth shorter than that required for visual achromatism, and that, while such a separation of the lenses would be entirely unsuitable for vision, it would afford photographic impressions of a sharpness and nice definition which he had not succeeded in attaining otherwise.” (Gould, page 430)

When enjoying the amateur astrophotography that is ubiquitous today, we might ask why there would not be great improvements in technology in a hundred and forty years. The answer is: Because we project ourselves too easily on the past. Cuneiform served successive civilizations of Mesopotamia and the Levant for 6000 years. In that time, people counted a large number, such as “five”, as “two-two-one” for 3000 years — a hundred generations — before new words were invented.13 The stone hand-ax was nearly unchanged, serving three species (or varieties) of humans for 100,000 years before the Microlithic Revolution.14

The extent to which a myriad of hobbyist snapshots have advanced theoretical explanations of empirical facts is not open to question.15 Taken further, new instruments such as the Unistellar eVscope which provides reducible data stored in sharable information warehouses, allow citizen scientists to participate in the discovery and exploration of exoplanets, novae, and supernovae.16 In that project, they follow the tradition of socialite Mary Anna Palmer Draper and retired medical doctor Henry Draper who were among the legion of 19th-century amateur astronomers. 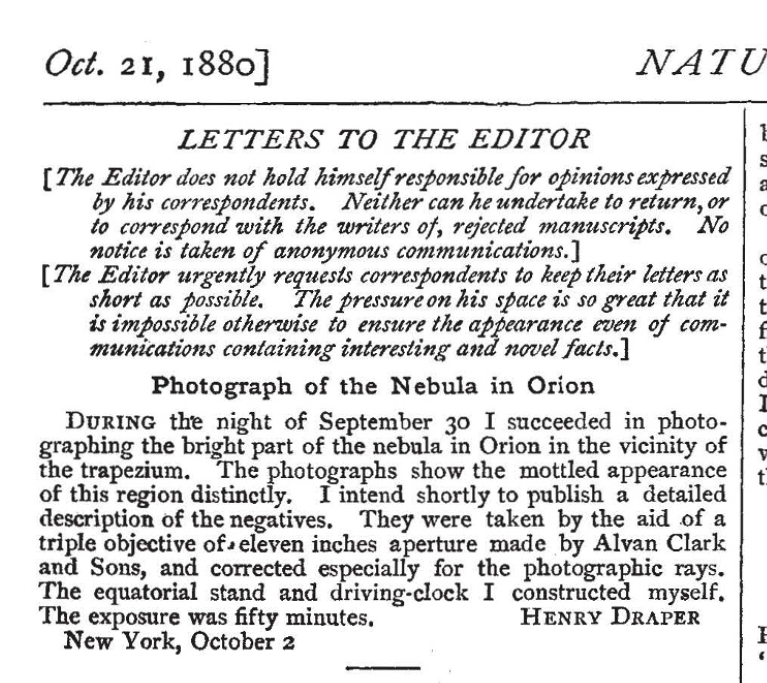 Fig. 1: Draper’s Letter to Nature. "Photograph of the Nebula in Orion DURING the night of September 30 I succeeded in photographing the bright part of the nebula in Orion in the vicinity of the trapezium. The photographs show the mottled appearance of this region distinctly. I intend shortly to publish a detailed description of the negatives. They were taken by the aid of a triple objective of eleven inches aperture made by Alvan Clark and Sons, and corrected especially for the photographic rays. The equatorial stand and driving-clock I constructed myself. The exposure was fifty minutes.” – “Letters to the Editor,” Nature, Oct. 21, 1880; page 583. 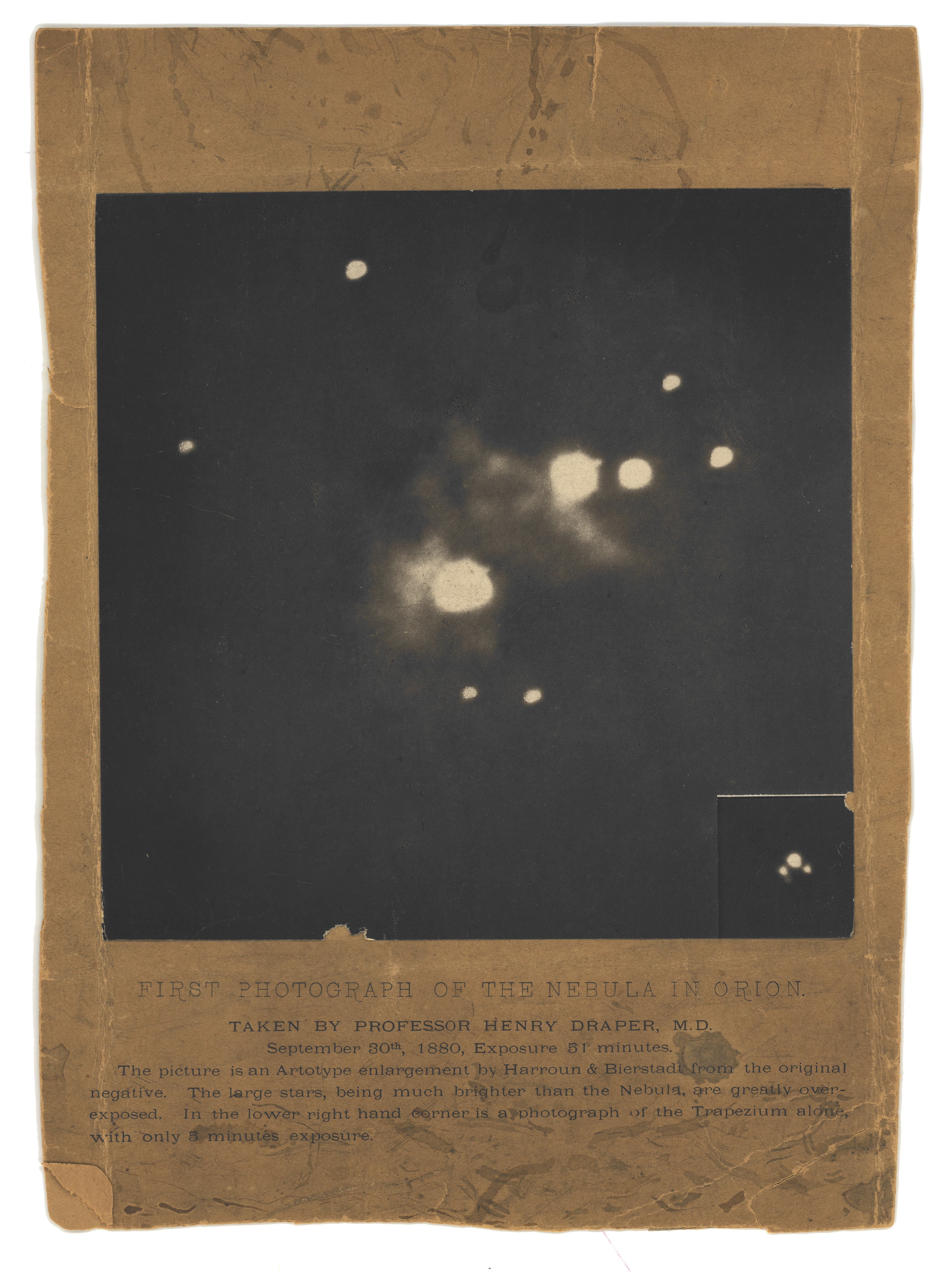 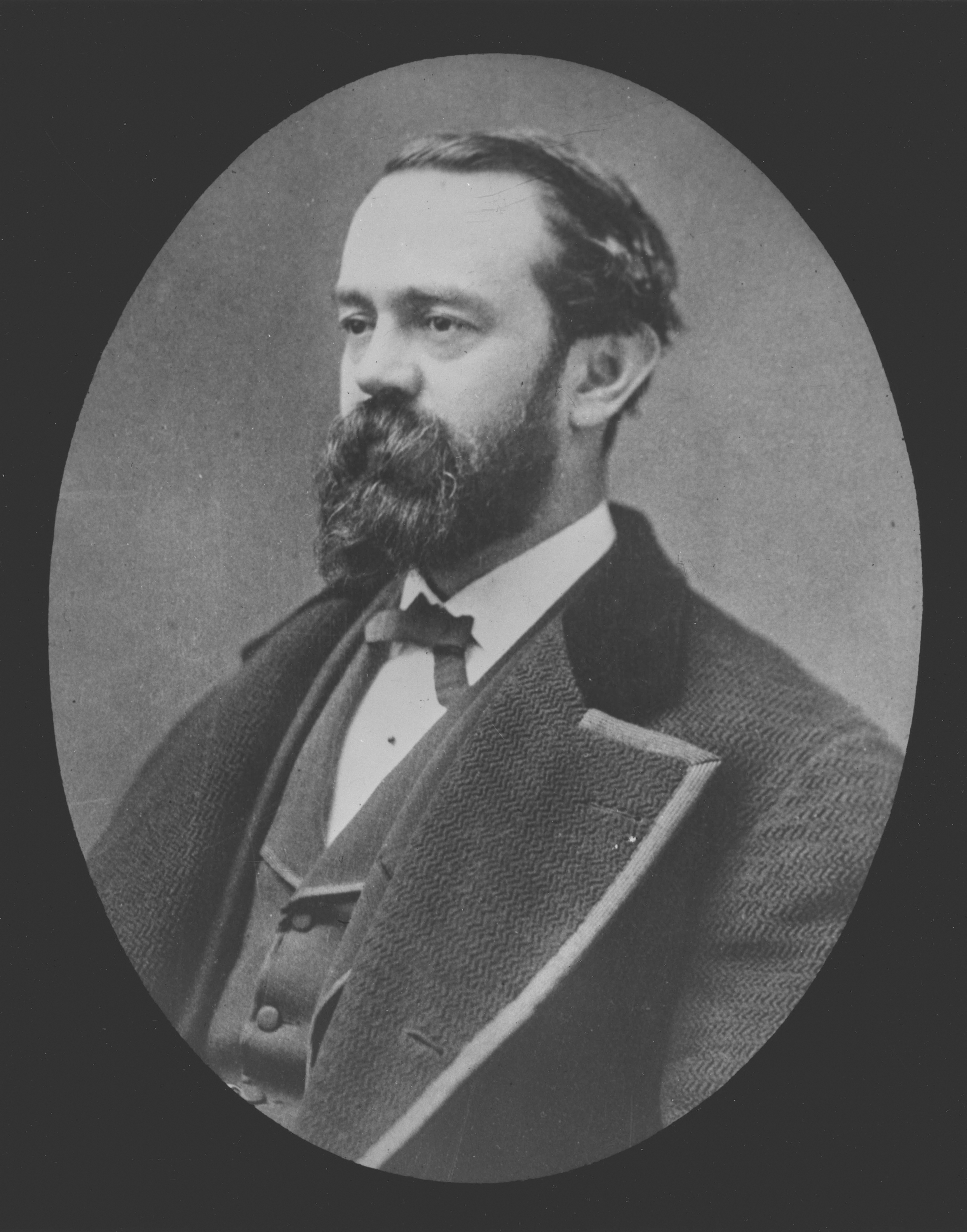 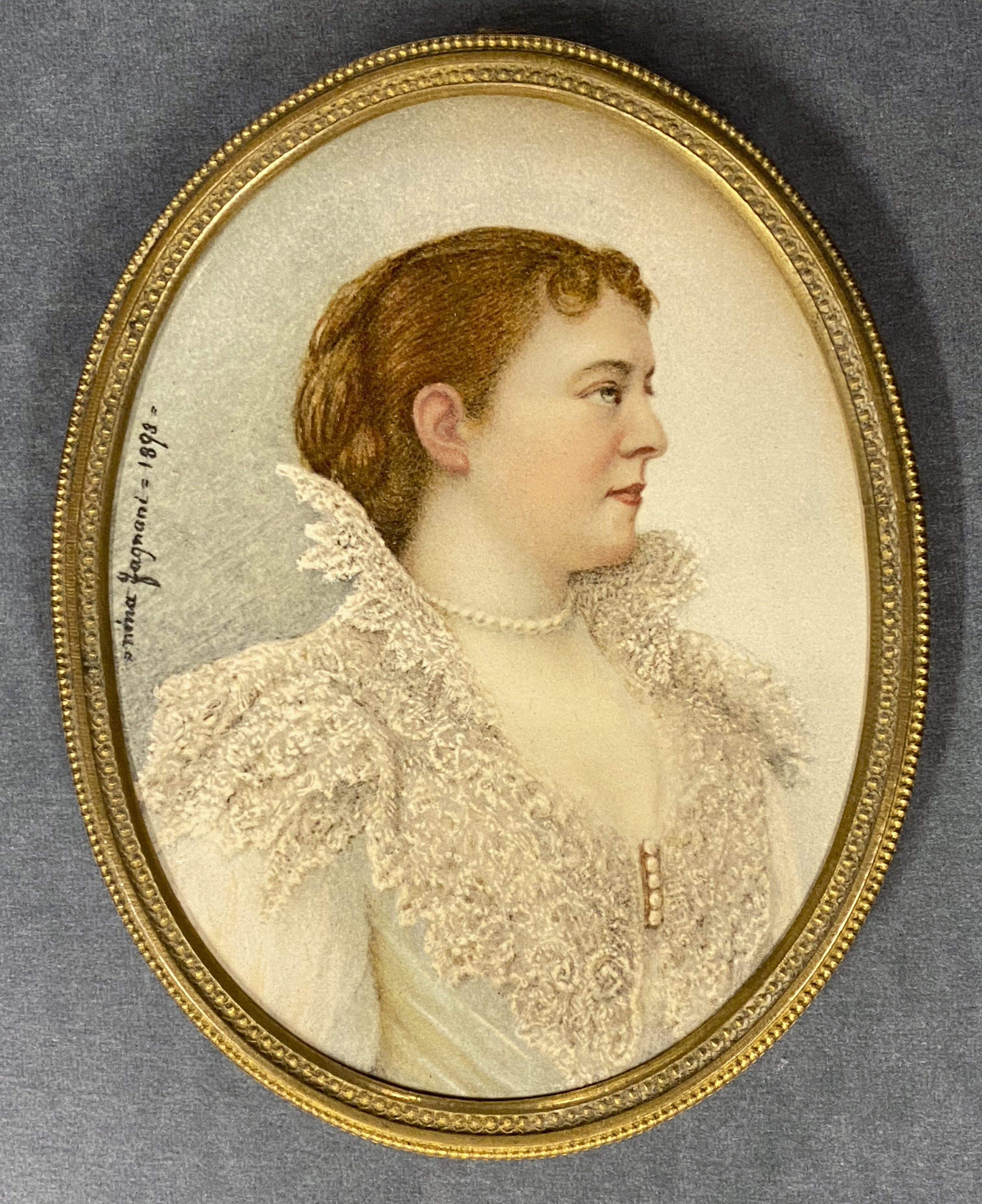 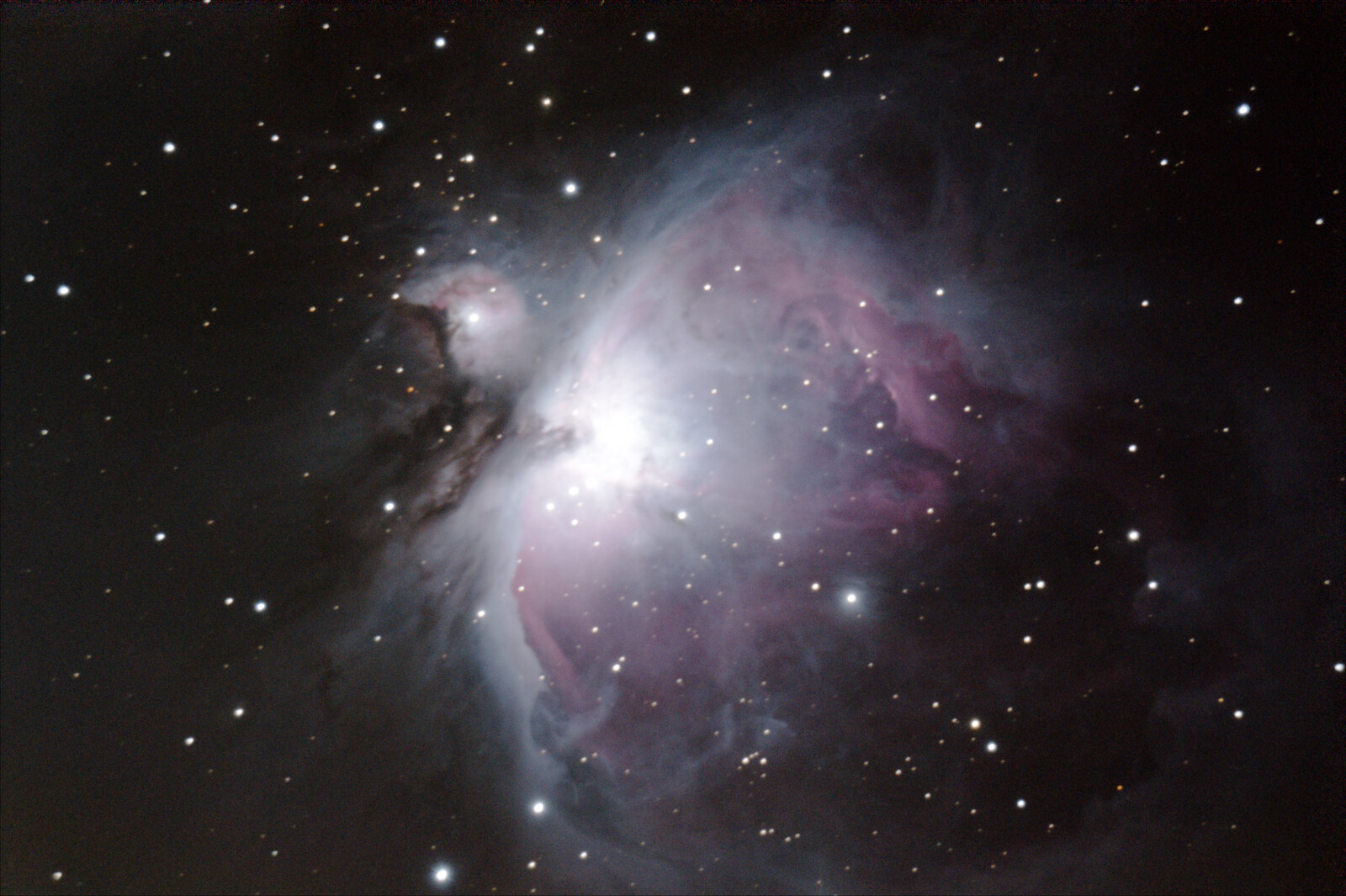