This Month in Astronomical History: October 2020

Each month as part of this series from the AAS Historical Astronomy Division (HAD), an important discovery or memorable event in the history of astronomy will be highlighted. This month's guest author, Michael E. Marotta, writes about the first published H-R diagram. Interested in writing a short (500-word) column? Instructions along with previous history columns are available on the HAD webpage.

One hundred ten years ago this month, the forerunner of the iconic Hertzsprung-Russell diagram, demonstrating the correlation between stellar spectral classes and apparent magnitudes in the Pleiades star cluster, appeared in the journal Astronomische Nachrichten1. The author of the paper was German astrophysicist Hans Oswald Rosenberg (1879-1940).

With this article, "Über den Zusammenhang von Helligkeit und Spektraltypus in den Plejaden" (On the Relationship Between Brightness and Spectral Class in the Pleiades”), Rosenberg anticipated similar graphical representations by Ejnar Hertzsprung and Henry Norris Russell. On page 76 of Rosenberg’s paper appears a graph whose abscissa is spectral class and ordinate is apparent magnitude, which for the roughly equidistant stars of the Pleiades stood in for absolute magnitude. For his definitions of spectral classes, Rosenberg employed a "decimal method" involving the Hδ and Hζ absorption lines of hydrogen and the K line of calcium, based on a formulation by Johann Georg Hagen, SJ, of the Vatican Observatory2. Rosenberg limited his investigation to the Pleiades, not only because cluster stars can be assumed to lie at a common distance, but also because the proper motions of stars in the Pleiades region had been measured, and Rosenberg could thereby distinguish between members and nonmembers of the cluster.

Rosenberg had completed his doctoral studies at the University of Strasbourg under Ernst E. Becker (1843-1912), investigating the Mira-type variable star 𝛘 Cygni. He followed up with a postdoctoral study at Tübingen, correlating luminosity with spectral type for stars in the Pleiades. It was this research that he published in Astronomische Nachtrichten in 1910, including the novel color-magnitude diagram suggested by his mentor, Karl Schwarzschild, at Göttingen, later at Potsdam. Rosenberg was appointed director of Tübingen’s observatory in 1912, a position that did not keep him from being stationed on the Western Front as an artillery officer at the outbreak of World War I.3,4

In 1926 Rosenberg accepted a position at the University of Kiel to serve as a professor of astronomy and director of the observatory. He led one of two groups from Germany to record the total solar eclipse of 29 June 1927, which was visible from the Arctic. (Rosenberg’s team went to Finland.) Two years later he organized the group that traveled to southern Thailand (then called Siam) for the total solar eclipse of 9 May 1929. Rosenberg’s tenure at Kiel was officially terminated in May 1935 by Germany’s new citizenship law (Reichsbürgergesetz), which restricted the rights of German Jews.3,4

Fortunately the Rockefeller Foundation, the Emergency Committee in Aid of Displaced German Scholars, and the United Jewish Charities of Chicago were able to bring Rosenberg, as well as his innovative photometric instruments and Zeiss filters, to Yerkes Observatory as a guest lecturer in 1934. The initial grant plus extensions allowed him three years’ respite. However, by then in his mid-fifties, with poor command of English and few publications, he could find no favor with Yerkes director Otto Struve4.

In 1938 Rosenberg sold his laboratory equipment and household furnishings to pay for a move to Istanbul, Turkey, having accepted an appointment to succeed Erwin Finlay-Freundlich as professor of astronomy and director of the observatory. Two years later he succumbed to the climate and died of heat stroke5.

Some four years after Rosenberg’s 1910 paper, Henry Norris Russell published his eponymous color-magnitude diagram in Nature6. Based on an address he had delivered several months earlier at the American Association for the Advancement of Science convention in Atlanta, Georgia6, the article credited both the tabular data published by Ejnar Hertzsprung in Astronomische Nachrichten in 19107 and Hertzsprung’s earlier paper distinguishing giant stars from dwarfs8. There was no mention of Rosenberg’s paper on the Pleiades.

Hans Rosenberg’s innovative and insightful work has not been completely eclipsed by the fame of Hertzsprung and Russell. An internet search reveals several citations, such as the one on Portal to the Universe, which is co-sponsored by the European Space Agency, NASA, and the McDonald Observatory, among many others. Explaining the importance of the H-R diagram, the Encyclopedia Britannica gives Rosenberg his due. Nonetheless, finding mention of Hans Rosenberg’s groundbreaking investigation in a standard first-year university survey textbook in astronomy would be exceptional. 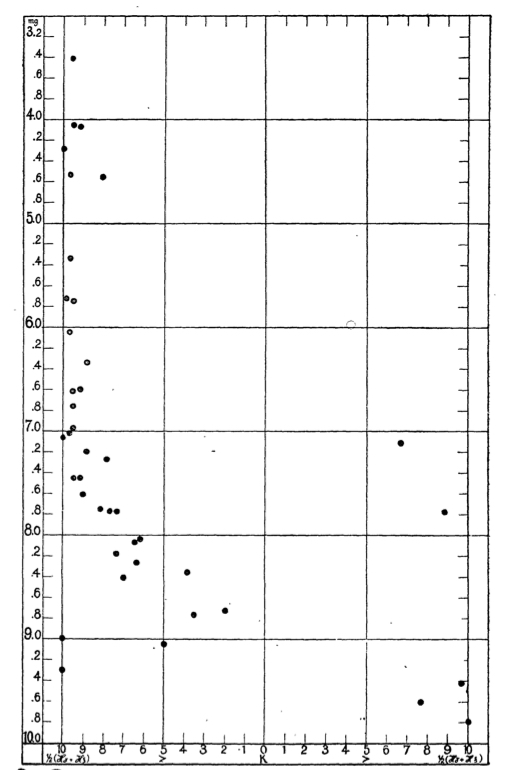 Figure 1. Hans Rosenberg’s color-magnitude diagram of the Pleiades, published in 1910. For each star, a numerical mean of comparisons of the spectroscopic K line with the Hδ and Hζ lines is given as the abscissa, and the photographic brightness as the ordinate.

This Month in Astronomical History: September 2020

29 Sep 2020
Each month this series from the AAS Historical Astronomy Division highlights an important discovery or memorable event. In this installment we focus on Johann Bayer’s 17th-century star atlas Uranometria.

This Month in Astronomical History: August 2020

16 Sep 2020
Each month this series from the AAS Historical Astronomy Division highlights an important discovery or memorable event. In this installment we focus on Maria Mitchell, America’s first woman astronomer.