This Month in Astronomical History: March 2020

Each month as part of this series from the AAS Historical Astronomy Division (HAD), an important discovery or memorable event in the history of astronomy will be highlighted. This month's guest author, Sethanne Howard, introduces us to the first astronomer whose name we know. Interested in writing a short (500-word) column? Instructions along with previous history columns are available on the HAD webpage.

The time around the spring equinox (20 or 21 March in the Northern Hemisphere) signaled the beginning of a new year in many ancient cultures. Akītu, the Sumerian new year festival, began with the first full Moon after the spring equinox. Calendar keeping was the work of ancient astronomers, the first of whom was En Hedu’anna, the chief astronomer-priestess of the ancient city of Ur in Sumer. She lived circa 2300 BCE, the only daughter of Sargon of Akkad (2334–2290 BCE), the great empire builder of that period. She was the first scientist in ancient history whose name we know and writings we have, though she was not called a scientist. That term did not come into general use until the mid-19th century. One whom we would call a scientist today was then known as an astronomer/mathematician, a philosopher, or a priestess and was part of society’s religious structure.

With En Hedu’anna, the tradition of women in science and technology begins. Her name in Sumerian means “she who is the chief ornament of heaven” (see Figure 1). We do not know her birth name. As chief astronomer-priestess she managed the great temple complex of Ur. She controlled the extensive agricultural enterprise surrounding the temple as well as activities scheduled around the liturgical year. Although we do not have technical works from her, we know that she was a learned, diversely talented woman of power. And we have her poems. Three long poems to the goddess Inanna, three poems to the god Nanna, and 42 temple hymns are found in translation today.1 She has been called the Shakespeare of the ancient world because her works were studied and recited for more than 500 years after her death.2 Echoes of her writing extend all the way into modern religious literature.

One of her hymns contains the following lines:
The true woman who possesses exceeding wisdom,
She consults a tablet of lapis lazuli
She gives advice to all lands...
She measures off the heavens,
She places the measuring-cords on the earth

Her poem describes the work of a scientist and leader. I think of her as wise (line 1). Lapis lazuli was very rare in ancient Ur. Most came from beyond the northern mountains (modern Afghanistan). Only the rulers could afford a tablet made of this stone (line 2). Giving widespread advice is also the mark of a leader (line 3). To measure off the heavens is clearly to engage in astronomy (line 4), while to measure the Earth is surveying (line 5). These are technical subjects requiring great mathematical skill to master.

It is from the work of early astronomers in Sumeria that modern liturgical calendars developed. We date Easter, Passover, and Ramadan using work derived from the ancient Sumerians. They studied the sky to set up a calendar not just for tracking the dates of religious events but also for tracking the due dates for taxes. I strongly suspect that the latter were more important than the former.

Another of En Hedu’anna’s poems describes her work:
in the gi-par the priestesses’ rooms
that princely shrine of cosmic order
they track the passage of the moon.

The gi-par was where the priestesses lived and where they tracked the Moon to set the calendar. It was a holy place often accompanied by a sacred garden.

There must have been a long line of unknown powerful women before En Hedu’anna who followed the stars and the cycles of the Moon. En Hedu’anna is the first of these woman of power and scholarship whose name we know. For the next 500 years a daughter of the king was appointed en-priestess of Ur.

Figure 1
En Hedu’anna’s name written in Sumerian cuneiform. Note that her name begins with ‘en’ meaning ruler. Her name is Sumerian meaning ‘she who is the chief ornament of heaven’ (image courtesy of J. E. Ybarra / CC BY-SA). 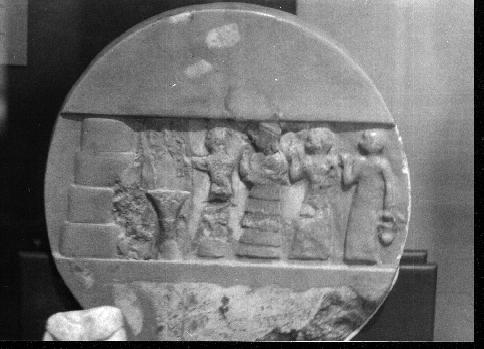 Figure 2
Alabaster disk (University Museum in Philadelphia), 25.6 cm in diameter, that shows En Hedu’anna in a procession. She appears in full religious regalia, the third person from the right (image courtesy of the author).

This Month in Astronomical History: January 2020

5 Feb 2020
Each month this series from the AAS Historical Astronomy Division highlights an important discovery or memorable event. In this installment we focus on the “king of amateur astronomy conferences” and “Woodstock of...