This Month in Astronomical History: January 2020

Each month as part of this series from the AAS Historical Astronomy Division (HAD), an important discovery or memorable event in the history of astronomy will be highlighted. This month's guest author, Kristine Larsen, Central Connecticut State University and Springfield Telescope Makers, focuses on the “king of amateur astronomy conferences” and “Woodstock of astronomy” hosted every year by the Springfield Telescope Makers. Interested in writing a short (500-word) column? Instructions along with previous history columns are available on the HAD webpage.

An often-heard conversation among New England amateur astronomers includes the question: “Are you going to Stellafane this year?” While the name is most often used to describe the “king of amateur astronomy conferences”1 and “Woodstock of astronomy”2 hosted every year by the Springfield Telescope Makers (STM) in Vermont, it is also used interchangeably to denote the 85-acre site of the summer gathering on the appropriately named Breezy Hill.A The moniker originally referred only to the STM’s pink clubhouse, located roughly a half mile away; a scant three years after its 1924 construction, it was already dubbed “the Mecca of the telescope makers.”3

On 17 August 1920, Arctic explorer, engineer, architect, artist, and amateur astronomer Russell W. Porter (1871-1949) commenced a telescope mirror-making workshop for 15 men and one woman (teacher Gladys A. Piper) at the Jones and Lamson Machine Company in Springfield, Vermont. Several of these individuals formed the core of the charter members of the Springfield Telescope Makers, who first met on 7 December 1923 and elected Porter the organization’s first president. Porter offered the club the use of a small plot of land on Breezy Hill that he had inherited, and the members immediately set to work building a wood-frame bungalow of Porter’s design on a rubblestone foundation. Preliminary construction was completed in January 1924, and at the STM meeting on 30 January 1924 the name “Stellar Fane” (fane being an archaic word for temple) was unanimously adopted.4 The interior of the cozy clubhouse featured a much-needed fireplace and two small upstairs rooms; a kitchen was built that summer and ornamentation added to the exterior. A work room completed the structure in 1926. Its original instrumentation included a 75-foot solar telescope that projected an image into an upper room and a transit instrument built into one wall. In 1930 a 16-inch reflecting telescope with a unique turret design was constructed, allowing observers protection from the harsh Vermont elements.5

Scientific American editor Albert G. Ingalls visited in mid-June 1925 to learn about amateur telescope making. The resulting cover article in the November 1925 issue entitled “The Heavens Declare the Glory of God” (the inscription from Psalm 19 carved along the front gable of the clubhouse) put Stellafane on the map. Ingalls described it as a “bizarre little house with steeply sloping roof anchored to the solid rock at all four corners by means of steel cables in order to keep it from blowing entirely off the mountain.”6

By the first convention on 3-4 July 1926 the contracted name “Stellafane” was officially in use, appearing on the postcard invitation to the event.B While that first convention hosted only 20 attendees, modern assemblies have seen crowds of 1,500 or more.

Two explanations persist for the clubhouse’s unusual color. Porter’s daughter Caroline reported that the local hardware store simply made an error when mixing the requested pale spruce gum pink, while an alternative explanation is that the club members gratefully accepted a free paint donation despite the color.7 Regardless of the truth, as it and the Porter Turret telescope are now designated a National Historic Monument, the clubhouse will always deserve its affectionate nickname, “The Pink.”

The next Stellafane Convention is scheduled for 13-16 August 2020.

A. Breezy Hill is the common name for the location. Geodetic survey maps refer to it as Litchfield Hill, while at the time of the clubhouse’s construction the name Merritt’s Hill was also in use.

B. The 13 December 1924 STM meeting attendance roster also names it “Stellafane,” but that appears to be an aberration, as no similar use appears in the club logbook until the July 1926 convention. 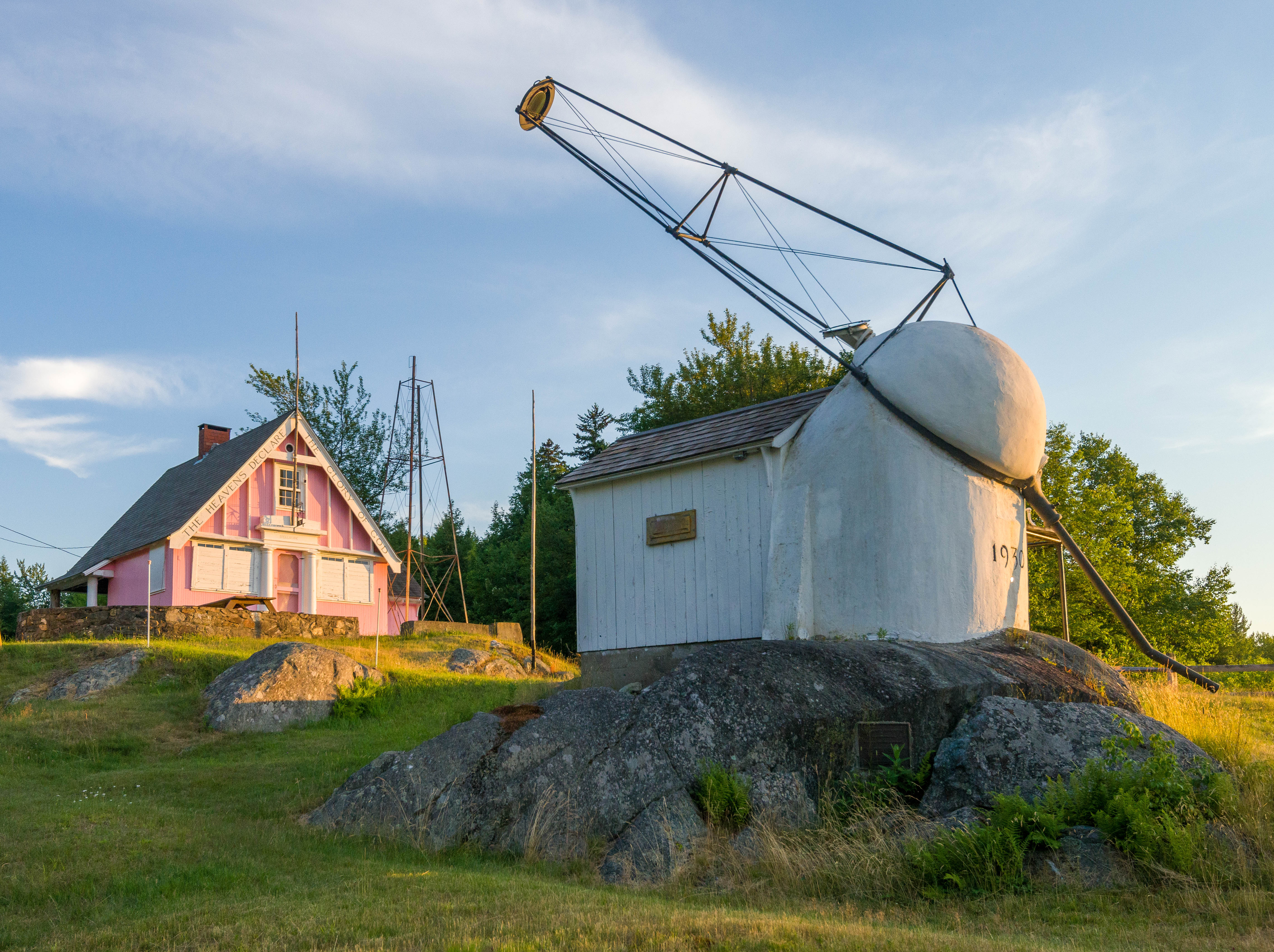 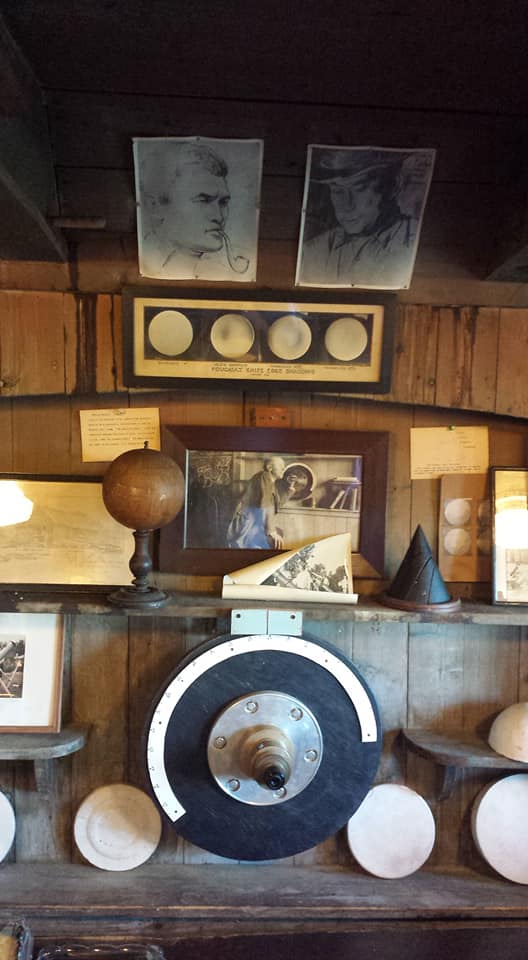 Clubhouse interior with transit instrument eyepiece. Many of the original artifacts from Porter’s time are on display in the Hartness-Porter Museum of Amateur Telescope Making, located in the Hartness House Inn near downtown Springfield, Vermont. Credit: Kristine Larson 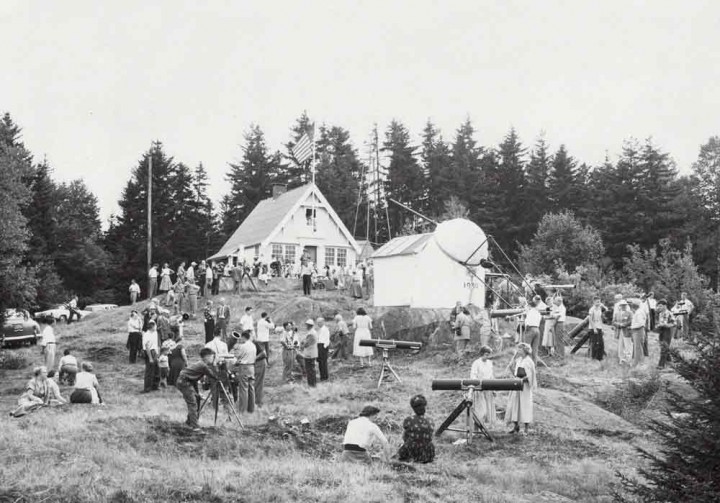 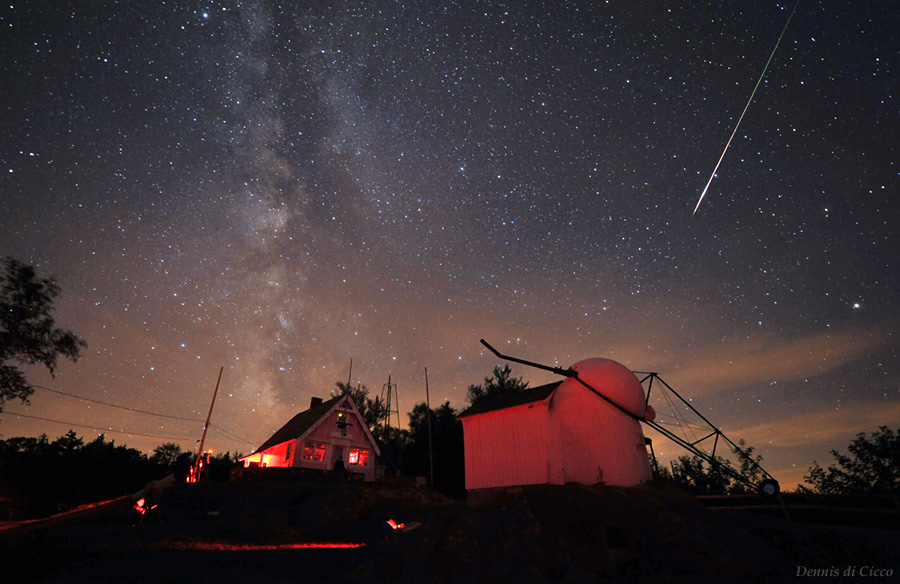