This announcement is based on an AIP press release: 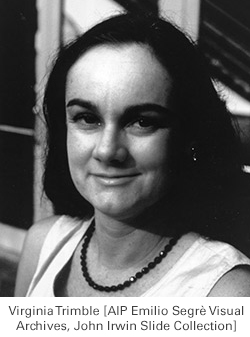 The American Institute of Physics (AIP) has announced that astronomer and AAS patron Virginia Trimble has been selected to receive the 2019 Andrew Gemant Award, an annual prize recognizing contributions to the cultural, artistic, and humanistic dimensions of physics.

Trimble is a professor in the department of physics and astronomy at the University of California, Irvine; is a staff astronomer and member of the advisory board for the Las Cumbres Observatory in Goleta, California; and holds an honorary staff position at the Queen Jadwinga Observatory in Poland. She has published more than 900 works in astronomy, astrophysics, science history, and scientometrics and, for many years, wrote a popular yearly review of astronomy and astrophysics research for the Publications of the Astronomical Society of the Pacific.

The Gemant Award recognizes Trimble's lifelong successes in the physical sciences and "for taking the broader view of how physics and astronomy is accomplished, creatively engaging physical scientists and the public throughout her lifetime, and commitment to establishing science within the social perspective." The award includes a cash prize of $5,000 and a grant of $3,000 to further the public communication of physics at an institution of Trimble's choice.

"We are extremely honored to present Virginia Trimble with this year's Gemant award," said AIP CEO Michael Moloney. "Dr. Trimble has devoted much of her life to exploring the historical and cultural side of physics and astrophysics. Her knowledge and professionalism are highly regarded in the international science community, and she is a most deserving recipient of this award."

"I am deeply honored and grateful to be a recipient of the Gemant award," Trimble said. "More specifically, I am deeply grateful to the colleagues who took the trouble to organize the nomination, which is by no means a trivial task. If I am remembered by the time of my 100th birthday, it will be for the Life magazine article, my year as Miss Twilight Zone, posing for Richard Feynman when he was learning to draw, and the Andrew Gemant Award."

Her nomination and selection as the recipient of the Gemant Award looked at Trimble's career as an advocate of the history of physics to students, colleagues, and the general public, as well as her work in the arts and humanities that evolved from her love and knowledge of physics.

The nomination committee noted Trimble's integral and lifelong achievements toward public enlightenment about astronomy, astrophysics, and other sciences in her writings, her work at as editor to broaden the world awareness of scientific achievements for generations of people, and her efforts to champion the social perspective of science by understanding how people relate to the sciences.