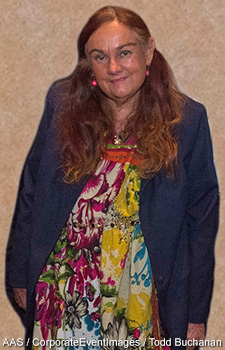 The AAS Board of Trustees has elected longtime AAS member Virginia L. Trimble (University of California, Irvine) as a patron of the Society, and the International Astronomical Union (IAU) has named asteroid number 9271 Trimble in her honor.

On rare occasions (e.g., only once so far this century), the AAS chooses to recognize an individual who has provided conspicuous service to astronomy and major support to the Society by naming them patrons. Trimble has contributed to the AAS and to our discipline in many ways. As described in her nomination to the Board, "She has been recognized for her work in writing numerous reviews of our science with the National Academy of Sciences Award for Scientific Reviewing. For the many other selfless ways she has served the Society, she was awarded our own George Van Biesbroeck Prize; she is also the recipient of the Klopsteg Memorial Award from the American Association of Physics Teachers. She was elected Vice-President of the AAS in 1997 and also served as Vice-President of the Executive Committee of the IAU."

In addition to her many intellectual and service contributions to the field, Trimble has also been one of the Society’s largest donors. She endowed the Weber Award for Astronomical Instrumentation and recently stepped forward to fund the archiving of the records that Helmut Abt accumulated over nearly three decades of editing the Astrophysical Journal.

But wait, there's more! On 31 January 2018, in Minor Planet Circular 108696, the IAU announced that asteroid 9271, discovered as 1978 VT8 on 7 November that year by E. F. Helin and S. J. Bus at Palomar Observatory, will henceforth be known as Trimble. The MPC citation reads, "Virginia Louise Trimble (b. 1943) is a highly perceptive commentator on the state of astronomy, regarded as a creative and insightful spokesperson for astronomy. Beyond her own special interests in stellar structure and evolution, she has improved the health of the profession through her application of historical citation studies."