An Update on Bias in Proposal Reviews

Last week I wrote about the issue of bias in the proposal peer review process. Here is an update from the Chandra Observatory project, which has also been tracking the success rates of men and women. 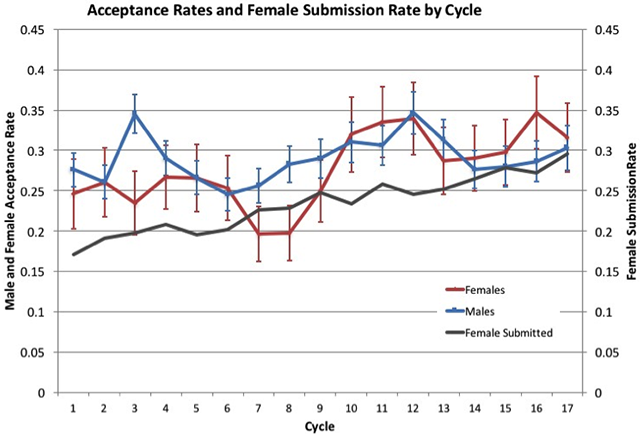 The figure shows the proposal acceptance rate over 17 Chandra review cycles for male (blue) and female (red) principal investigators (PIs). Although acceptance rates were higher for men than women in the early years, they have been indistinguishable since Cycle 10 (in 2009).

Shown in dark grey is the fraction of submitted Chandra proposals led by a woman, which has been rising steadily from 17% in Cycle 1 to nearly 30% in Cycle 17. The Chandra X-ray Center notes that evidence of bias went away as the percentage of female Chandra PIs reached ~25%, perhaps indicating a critical mass for this process. According to Neill Reid’s presentation to the Space Telescope Users Committee last November, the fraction of female PIs in Hubble proposals has hovered near 25% since Cycle 21 (2013). If that fraction increases over future cycles, we can see whether the gender differential decreases, though many other variables could be at play.

The good news is that our colleagues at the major observatories are on top of this problem and are working toward a solution. Peer review is at the heart of what we do. It has to be fair.