Like many astronomers, I was writing Cycle 24 Hubble Space Telescope (HST) proposals a couple of weeks ago. On the formatted front pages, unusually, a place to put the name of the principal investigator was nowhere in evidence, and the co-investigators were to be listed in alphabetical order.

The change was prompted by the discovery of bias in previous HST proposal reviews (Reid 2014). The effect is small — on the order of a handful of proposals per cycle that do not go to women PIs who earned their PhDs prior to 2000 — but even that small difference can be consequential. After all, success in observational astrophysics means winning observing time on telescopes and securing funding for student and postdoc support. It’s simply unacceptable that acceptance rates are 15% for senior women PIs when they are 26% for younger women and men and 28% for senior male PIs (these numbers represent the average rates over Cycles 19-23). 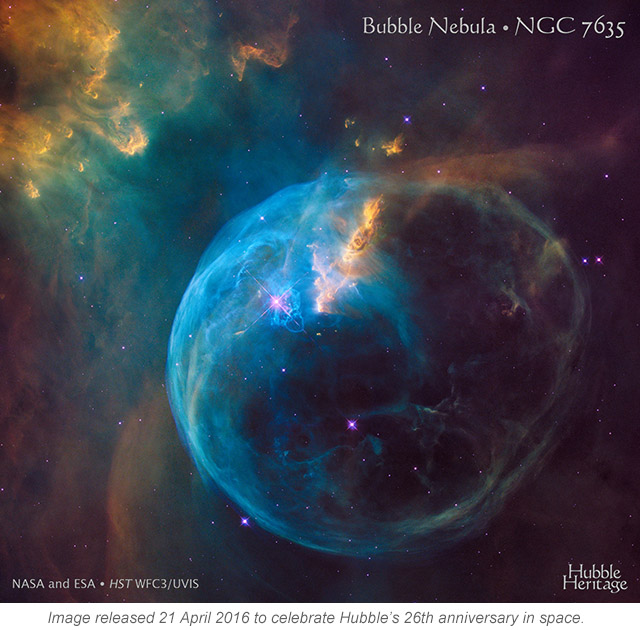 I have previously commended the Space Telescope Science Institute (STScI) for studying their data and for publicizing this disturbing result. (Full disclosure: I headed the STScI Science Program Selection Office in the late 1990s, when some of these reviews occurred.) I also am impressed that they are taking steps to combat the bias, in consultation with their Users Committee.

First, they made proposal reviewers aware of the biased results. It’s a well-established principle that if we know about our own biases, we will compensate for them — though we have to believe the bias exists, which may not be the case for every HST proposal reviewer. The first cycle with this new approach showed no change.

Next, STScI de-emphasized the PI name by moving it to the second page of the proposal. Again, no appreciable change.

This year, the HST template includes the more dramatic change of no PI name, no special ordering of investigators, and no requirement to summarize previous HST programs. The only way for reviewers to know the PI is if the proposal text tells them.

What will this do? I’m very interested in seeing the outcome. My hope is that the bias disappears, though I suspect none of the reviewers will be able to resist guessing who the PI is — kind of the same way people think they know who anonymously refereed their paper.

But my purpose in writing this column is not so much about this particular experiment. It’s to point out the impressive fact that STScI checked for bias and, when they found it, began actively trying to fix it. Isn’t that what we all should be doing?

Astrophysics, like the rest of academia, is supposed to be a meritocracy. It has not yet fully realized this ideal. And the measurable gender+age bias may simply be the one easiest to measure — surely it means that other biases unrelated to scientific merit may be present.

Academic institutions have been slow to combat the biases built into their hiring, retention, and promotion systems. Mostly, there is huge resistance to change from the status quo, in terms of processes and people. Perhaps STScI can serve as a model: they did the study, publicized the results, and are actively trying to reduce the bias.

Apparently there has been some grumbling about the latest approach. Senior people’s names as PI might have added some heft to their proposals. (Only for senior men, of course. For senior women, it’s a drawback.)

If you have a better idea for combatting gender bias in proposal reviews, I encourage you to send it to Neill Reid, who oversees the proposal review, or Ken Sembach, STScI’s director. They want to make this right. And when they find a way, I hope other proposal reviews — and federal agencies and academia more generally — will adopt similar strategies. After all, surely no one wants to think their path to success was just that little bit easier because some competition was eliminated.

Reference:
“Gender-Correlated Systematics in HST Proposal Selection,” I. Neill Reid, 2016 October, Publications of the Astronomical Society of the Pacific, Vol. 126, No. 944.