President's Column: A Gem of a Meeting in the Emerald City

I’ve been attending AAS meetings regularly for more than 30 years, but last week in Seattle marked my first meeting as President of the Society, so it felt very special. From pre-meeting tweets to post-meeting encounters with stragglers in downtown Seattle on Friday, I enjoyed every single minute, and I’ve heard from many of you who said the same.

For the AAS Council the meeting started on the weekend, with an informal strategy meeting Saturday and a more formal meeting Sunday. We got a tremendous amount done, which I’ll describe in more detail in future columns. For now I’ll just mention a few highlights. We approved recommendations of the Journals Task Force, which for the past year thought about how to reinforce our strong brands (the Astronomical Journal and the Astrophysical Journal, and of course the AAS itself), streamline our processes from submission through publication, and continue leadership in electronic publishing; a transition team will now develop a detailed implementation plan. We talked about AAS meetings and created a task force led by AAS Council member Steve Unwin to consider ways to improve them. Another Council task force is addressing best practices for AAS prizes. We discussed the important work of our three diversity committees (WGLE, CSMA, and CSWA, from newest to oldest); the new FAMOUS travel grants (Funds for Astronomical Meetings: Outreach to Underrepresented Scientists); and how our committees might address the intersectionality of gender, race, ethnicity, gender expression, religious identity, and other aspects of diversity. 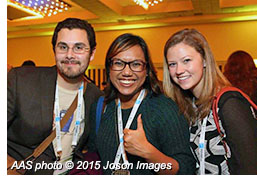 It was also a busy weekend for those who attended the many workshops and splinter meetings on Saturday and Sunday. It seemed like the Sheraton Seattle Hotel and Washington State Convention Center were almost as crowded as on weekdays — until about 3,000 more astronomers arrived, that is.

What an incredible gathering! From the hundreds thronging the undergraduate reception on Sunday night, to the career networkers on Monday night, to the graduate students and postdocs talking about their impressive projects, to the “40+Emeritus” group of senior astronomers, to our AAS exhibitors and industry and university partners — it just rocked from start to finish.

And how about those plenary speakers? Just when you think they couldn’t possibly top last year’s lineup, another bunch comes along and knocks your socks off. Serious kudos to the AAS Vice-Presidents, who once again put together a superior schedule of talks, and to the prize-selection committees, whose choices make us so proud. (See our press release about the 2015 AAS prizewinners.) I also want to thank the incredible AAS Executive Office staff, who pulled off the complicated logistics without a visible hiccup (though I expect there were a few). 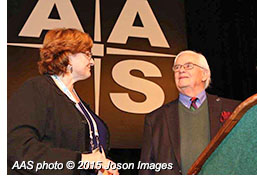 Why do we astronomers meet twice a year, year after year? Thirty years ago publication times were long and communications far slower and more cumbersome than today, so AAS meetings were the place to hear the latest science results. They were also small enough (600 was a big meeting) that you could talk to pretty much everyone there. Maybe there were a few parallel sessions, but they rarely clashed, and there was plenty of time to read all the posters.

Now we have up to 15 parallel oral sessions, hundreds of posters each day, and so many attendees that a few years ago my postdoc told me I walked right by her without saying hello. (Hey, in my defense, she went from long hair to short without advance notice!)

It’s a different meeting in 2015 than it was in 1985. Now it’s not only about science but also about networking, splinter meetings, career workshops, graduate-student recruitment, hiring (academic and, increasingly, industry — hurray!), tweetup dinners, job talks, dissertation talks, seeing old friends and colleagues, holding national committee meetings (go PAGs!), watching press conferences (lots of hot news despite today’s fast publication times), gathering swag, listening to review talks in fields we want or ought to know more about, and much, much more. 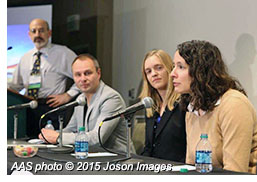 The only problem? Everyone I talked to wished they could clone themselves 10 times over, to get to everything of interest. (We’ll need some help from the biologists for that.)

I would stop here, but writing “1985” reminded me of that year's January AAS meeting in Tucson, Arizona, when I was a postdoc at MIT. I think that might have been the first occasion I dined with David Helfand — someone I’d met as a summer student at the National Radio Astronomy Observatory years earlier (he was then doing graduate work at the University of Massachusetts). This Columbia professor gave me a pep talk over dinner at some fancy resort, at a time when I wasn’t sure I belonged in astronomy, and he told me I was good at it. It helped.

Over the past 30 years, whenever David and I are at the same meeting, we’ve usually managed to have dinner together. (He definitely knows where the good food is.) So it has been a particular pleasure to shadow him over the past year, to learn the President’s job from him, and now, to lean on him for advice and information. I’ve known past AAS Past President Debbie Elmegreen nearly as long and just want to do half as good a job as she did (and be half as good a person as she is).

These are good friends, whom I met first as colleagues in astronomy, and I got to know them (and many others) at many AAS meetings across the years.

There weren’t nearly as many postdocs in 1985 — or as many faculty either — but the principle in 2015 is the same. In Seattle some postdoc got a pep talk from a new mentor. And students and professionals and retired astronomers and writers and citizen scientists and software people and aerospace engineers —you whole lot — were meeting new people, developing friendships, and creating future collaborations.

I can’t wait until the next meeting! As you may already know, we're skipping our June meeting in 2015 because we are hosting the 29th General Assembly of the International Astronomical Union (IAU) in Honolulu in August (you need not be an IAU member to attend). See you there, and/or at our next winter meeting in Kissimmee (pronounced "kiss-IMM-mee"), Florida, in January 2016! Until then, stay warm, and thank you for making Seattle 2015 a fabulous experience.