President's Column: Astronomers in the Academy and Industry

As Incoming President of the AAS for the past year or so, I’ve been asked what major initiatives the AAS should undertake. Here’s one of the most important: building better links between the academy and industry. I would like to see the AAS connect students and professors in universities with astronomers across the world who are employed in other places — in aerospace, computing, finance, Internet start-ups, wherever. Many astronomy alumni have found interesting, rewarding work outside the academy. Let’s celebrate their contributions and tap into their wide-ranging expertise; connect employers with young people looking for a challenge; and (as needed) reconnect alumni with the American Astronomical Society, which will be better and stronger with a broader membership.

The skills we acquire in training to be astronomers are incredibly valuable. The CEO of a data-mining company once told me his hiring priorities: first astronomers, then physicists, then economists. Astronomers and physicists, he explained, understood statistics and had strong quantitative skills, and astronomers had a slight edge because they were more familiar with "big data." A former postdoc who worked with me on blazars and who now works in government consulting said his current job is similar in many ways to his astronomical research: to answer a complex question he had to figure out what data were needed, find and analyze those data, determine the answer, and write it up in a report. He said he loved the challenge and the variety. Indeed, I have yet to meet an astronomer employed outside academia who doesn’t enjoy his or her choice.

Of course, professors love their jobs, too, so it’s not surprising they encourage their students to consider becoming faculty. I know I do. But even with strong growth in the number of astronomy faculty positions over the past 20 years (in part because physics departments are hiring astronomers), there is not a faculty job waiting for every newly minted PhD. That’s kind of obvious: unless every professor educates on average only one student per 40-year career, she has over-reproduced herself. Every first-year graduate student can do the math: for every PhD graduate to obtain a faculty position, the field has to support exponential growth.

In my view, however, this is not a crisis, and decreasing the supply at the front end (i.e., in graduate-student admissions) would be a mistake. It’s a feature, not a bug, that we give students the opportunity to learn and to grow and, as postdocs, to demonstrate individually what they can do. During this process, plenty of students decide that the academic life is not for them and look for other options. 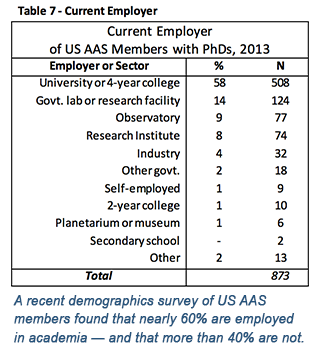 The problem is, we don’t currently give students enough information about alternative careers. (The AAS Employment Committee, chaired by Kelle Cruz, does a terrific job of disseminating this kind of information, but she and I are eager to do more.) This is mostly because professors know about their own paths, so that is what we teach our students. Some of us bring alumni back to talk to students about alternatives, but that’s not enough.

The American Astronomical Society exists to serve its members. A large fraction of its members are young people. Young people are concerned about employment. We simply have to do better, to create a network linking young astronomers-in-training with the vast array of astronomy alumni currently working outside academia.

These astronomers have a lot to offer the AAS, far beyond giving jobs to newly minted astronomers. Can we tap the enthusiasm that brought them to astronomy in the first place? Astronomers constitute a small, friendly community. It’s ideal for a tight network.

And it’s unfortunate when we give our students the impression that a faculty job is the only satisfactory endpoint for an astronomer-in-training. It’s understandable — we know the path we trod and are relatively clueless about employment outside the academy — but there are many other important and interesting jobs well matched to the astronomy skill set.

For example, leading Internet companies created the six-week Insight postdoctoral training fellowship to bridge the gap between academia and a career in data science. It’s highly competitive (only 20 of ~500 applicants are accepted to each session), and so far, 100% have been hired by those same companies at the end of the program. A recent Yale astronomy PhD, Nhung Ho, returned to campus to give a professional development seminar about her experience in the Insight program. Interestingly, she noted that about 40% of the Fellows were astronomers, compared to ~20% from engineering, 20% from biology, 10% from math/statistics, and 10% from social science.

Just talk to the chief operating officer of MediaMath, Ari Buchalter, formerly a postdoc in theoretical astrophysics at Caltech. He loves his job. Last January he told Congressional staffers, as part of an AAS-organized briefing on Capitol Hill, about the valuable skill set he learned as an astronomer, the number of jobs he has created, and how contemplating the universe informed his approach to business.

Wouldn’t it be great if we linked alumni like Ari (who I am happy to report is a current AAS member!) with astronomy students and postdocs who would love working on some of the challenges facing companies outside astronomy?

This is one of my prime interests as AAS President. Let’s explore how the AAS can connect to and serve members whose career aspirations take them outside the academy.

So, to astronomers whose training led you to a career in industry: please stay with us or, if your membership has lapsed, come back! We want your input, we want you to mentor younger astronomers, and we want to understand your astronomically informed experience of the world outside universities.

To young people looking at alternative careers: we will be doing more to inform you about converting from the career path your professors know about (being a professor) to the world of other opportunities out there. I’ll say more about this in future columns.

To corporate members of the AAS: tell us how we can partner with you to create better linkages. After all, where else can you find such concentrated, high-level talent as in the AAS?

To every AAS member: I’m interested in your thoughts. The AAS is a society that exists to serve you. Tell me, tell your Council representatives, tell our Executive Officer, Kevin Marvel, what you think. We want to hear from you!