US Astronomers Discuss Importance of Federal Investment in Science with Congress

Seventeen members of the American Astronomical Society (AAS) traveled to Washington, DC, on 16 March 2016 for a Congressional Visits Day to thank their members of Congress for supporting research and development in the Fiscal Year (FY) 2016 Omnibus appropriations and to ask for continued support in FY 2017 and beyond. 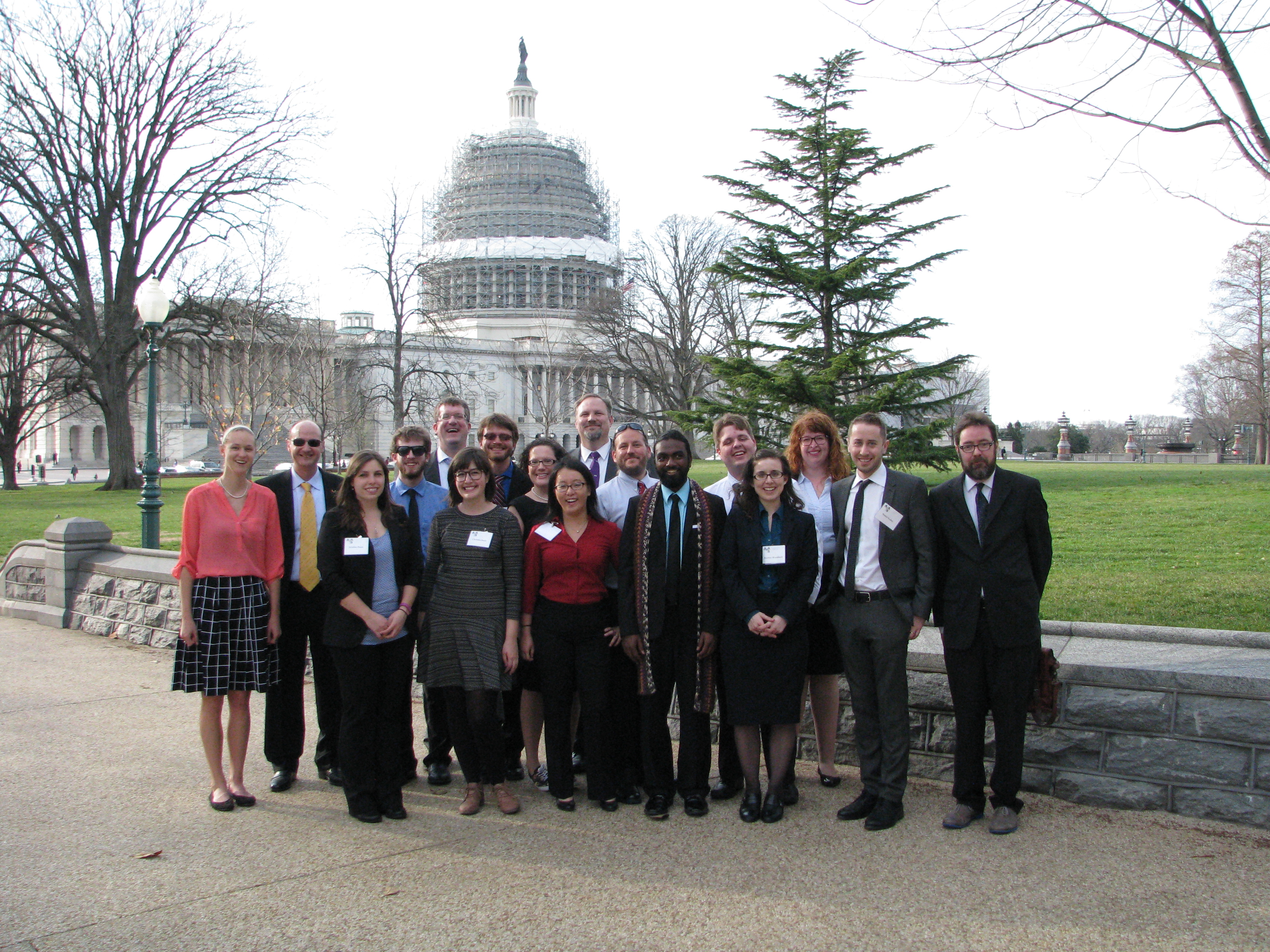 The AAS annually hosts members for visits with their representatives’ staffers to discuss the importance of sustained and predictable federal funding of research and development programs — including those supported by NASA, the National Science Foundation (NSF), and the Department of Energy. These meetings are a part of a larger coordinated effort, Congressional Visits Day (CVD), that gathers scientists, engineers, researchers, educators, and technology executives in the nation’s capital to raise visibility and support for science, engineering, and technology.

This was the 17th year of AAS participation in CVD. Participants came from across the country and included a particularly high percentage of early-career members. “The energy and engagement they exhibited during their all-day briefing and training session at the AAS Executive Office convinced me they would be super effective in communicating with Congress,” said Kevin Marvel, AAS’s Executive Officer.

While visiting with members of Congress and their staffers, CVD participants discussed the importance of the astronomical sciences and the nation's broad portfolio of investments in science, engineering, and technology to promoting prosperity and innovation. Most importantly, they provided a constituent perspective on the local impact of these programs and their significance to virtually every region of the country. “It’s critical that members of our community make their voices heard in Washington, because no one else is going to do it for us,” said Joel Parriott, AAS’s Deputy Executive Officer & Director of Public Policy. “I’m grateful to our volunteers for making the 2016 AAS CVD a resounding success.”

The CVD program also provides AAS members with the tools they need to be effective advocates for science. “Given the tight budgets of recent years, advocating for science has become a critical component of doing science,” reiterates Heather Bloemhard, AAS’s John Bahcall Public Policy Fellow. “Our hope for all of our CVD participants is that they head back to their home institutions feeling prepared to incorporate some advocacy into their regular activities as scientists.”

One of the main goals of the group was to provide information to policy-makers about community priorities as laid out in the astrophysics, planetary science, and solar and space physics decadal surveys. These represent the astronomical community’s consensus on the current state of scientific understanding and the prioritized lists of projects needed to address outstanding questions over the next decade. Funding agencies look to these reports for guidance on scientific priorities.

CVD participants argued forcefully that basic, curiosity-driven research yields a high return on investment. More than 50% of all industrial innovation and growth in the United States since World War II is attributed to advances pioneered through scientific research. Achievements from federally funded science, engineering, and technology include global environmental monitoring, lasers, liquid crystal displays, and the internet. Today’s federally funded R&D lays the foundation for tomorrow’s scientific and technological progress. Federally supported research fuels innovations in high-tech industries, expands the frontiers of every field of science, and trains future generations.

O’Meara and Shiode participated as team leaders; O’Meara is a member of the AAS Committee on Astronomy and Public Policy (CAPP). Shiode, now at the American Association for the Advancement of Science, is a former AAS John Bahcall Public Policy Fellow. Jennifer Greenamoyer, Senior Government Relations Liaison, American Institute of Physics, also assisted the AAS as a team leader.