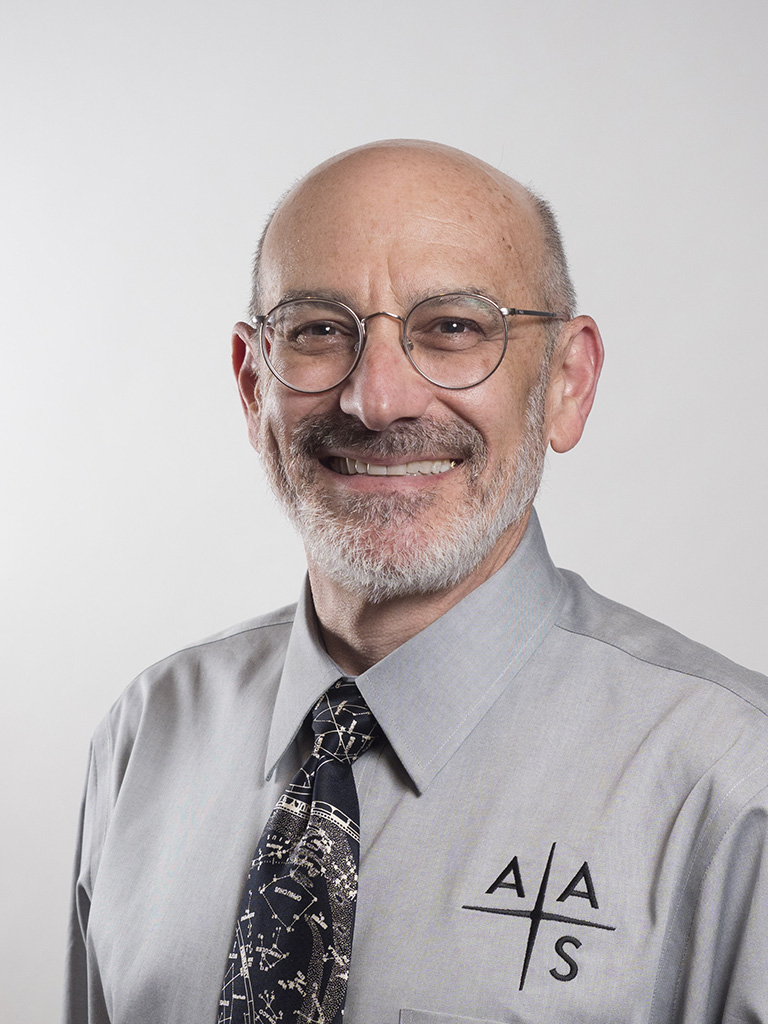 Astronomer and science communicator Dr. Richard Tresch Fienberg was the American Astronomical Society’s Press Officer from 1 September 2009 until his retirement on 1 September 2021. Throughout his AAS tenure Rick worked from home, first in the Boston, Massachusetts, area and then from rural New Hampshire.

Born and raised in Los Angeles, California, Rick was turned on to astronomy and space exploration in 1968 thanks to the confluence of four events. He received a small telescope as a 12th birthday gift, read The Universe: From Flat Earth to Quasar by Isaac Asimov after buying it at his middle-school book fair, got caught up in the excitement of the Apollo 8 mission to the Moon, and was riveted by the movie 2001: A Space Odyssey. “As of 1968 I knew that I wanted to pursue a career that had something to do with space,” Rick recalls, “and that’s what I did.”

Rick majored in physics at Rice University, which he applied to because it’s in Houston, Texas, home of NASA’s mission control center, and because it had the first space-science department in the country. During the summer of 1976, between his sophomore and junior years, he spent a month at the Jet Propulsion Laboratory as an undergraduate intern with NASA’s Viking mission, working on both the orbiter and lander teams. “I credit Carl Sagan, who created the Viking internships, with giving me my first paying job in science,” says Rick. Back at Rice for his junior and senior years, he helped build a sounding-rocket experiment and analyze the data it returned after its brief flight through the aurora borealis over Alaska.

After spending a gap year in Europe with his new bride, Susan, whom he met at Rice and who graduated with a Thomas J. Watson Fellowship for independent study and travel abroad, Rick began graduate school in astronomy at Harvard University. Susan attended Harvard Divinity School. “We used to joke that we had the heavens covered,” says Rick.

While taking classes and working on his master’s degree, Rick served as a teaching assistant in the undergraduate course “The Astronomical Perspective” led by science historian Owen J. Gingerich and stellar astronomer David W. Latham. Gingerich contributed occasional articles to Sky & Telescope magazine, not far from Harvard in Cambridge, Massachusetts, and invited Rick to co-author two items for the magazine’s “Laboratory Exercises in Astronomy” series. Rick then turned attention to pursuing his doctorate, working with Giovanni Fazio and a team of scientists from NASA and the University of Arizona to develop one of the first digital infrared cameras suitable for use on telescopes. That project’s success was a key factor in Fazio’s later selection by NASA as team leader for the Spitzer Space Telescope’s Infrared Array Camera.

“Even before I finished my PhD,” says Fienberg, “I realized that I enjoyed teaching and writing about astronomy more than I liked doing research.” While wrapping up his work at Harvard, he learned that Andrew Chaikin, a fellow former Viking intern on Sky & Telescope’s editorial staff, was about to leave the magazine to write what would become the bestselling book A Man on the Moon: The Voyages of the Apollo Astronauts. Rick applied to fill the impending vacancy, got the job, and joined S&T’s staff as an assistant editor in September 1986.

Over the next 22 years Rick served in a variety of editorial and management positions at S&T, including eight years as Editor in Chief and nine as President of parent company Sky Publishing. In 2008, weary of the monthly publication cycle, he left the magazine — temporarily, as it turns out — to begin a stint as Visiting Scientist at Phillips Academy, a prestigious college-preparatory school in Andover, Massachusetts, which counts astronomer Lyman Spitzer among its alumni. Within a year that position became a casualty of the economic recession. By the time Rick left the classroom, though, Steve Maran had retired after 24 years as AAS Press Officer, and Rick had successfully applied for the opportunity to succeed him.

Rick is an elected Fellow of the American Association for the Advancement of Science (AAAS). The International Astronomical Union (IAU) — which he served as President of Commission C2, Communicating Astronomy with the Public, from August 2018 to August 2021 — named asteroid 9983 Rickfienberg in his honor. He is co-creator of the Galileoscope educational telescope kit, a Cornerstone Project of the International Year of Astronomy 2009 and the International Year of Light 2015, and co-author of "Build a Sun Funnel," which describes how to make a solar-observing aid for use in public outreach (available as a PDF). In 2018 NASA awarded him its Exceptional Public Achievement Medal “for exceptional service to the nation in [his] tireless efforts for the public’s safe solar viewing of the 2017 total solar eclipse.”

At the Stellafane convention and star party in 2019, the North East Region of the Astronomical League (NERAL), celebrating Rick’s role in the AAS’s acquisition of Sky & Telescope after the magazine’s previous owner declared bankruptcy, gave him the Walter Scott Houston Award for his “many years enlightening [amateur astronomers] and educating the public.” Rick is again writing regularly for the magazine as Senior Contributing Editor. Though he’s no longer working for the AAS, he is continuing to serve the Society in a volunteer capacity as Senior Advisor to the Executive Officer and Program Manager of the AAS Solar Eclipse Task Force, which will help prepare North America for the 14 October 2023 annular eclipse and the 8 April 2024 total eclipse.

Trained as a professional astronomer, Rick nevertheless remains an amateur at heart, observing the sky and taking astrophotos from his private observatory in central New Hampshire. An inveterate traveler and eclipse-chaser, Rick has visited all seven continents and the North and South Poles. He and Susan — who retired in 2019 from a career in senior health and housing — are the parents of three grown sons and have two young grandchildren.

Photo at top of page by Phil McCarten, CorporateEventImages © 2019 AAS