The American Astronomical Society (AAS), a major international organization of professional astronomers, astronomy educators, and amateur astronomers, supports the decadal survey report identifying scientific and foundational priorities, opportunities, and funding recommendations for astronomy and astrophysics in the coming decade and beyond. The report of the Astro2020 steering committee, several years in the making, was released this morning in a public briefing webinar by the National Academies of Sciences, Engineering, and Medicine. AAS leadership anticipates passing a formal endorsement at its Board of Trustees meeting next week.

“The AAS thanks the Astro2020 steering committee for their work, and we are poised to act on and actively advocate for the important recommendations set in this report, which are based on broad input from our astronomical community,” says AAS President Paula Szkody (University of Washington). “Implementing these recommendations will point our field toward a healthier profession and a promising future of astronomical discoveries.” 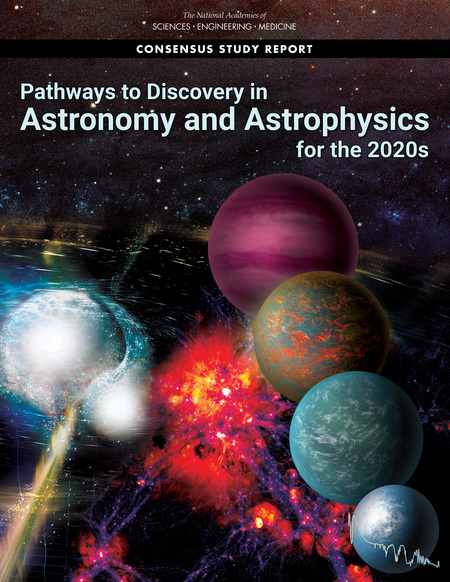 The Astro2020 decadal survey report, titled Pathways to Discovery in Astronomy and Astrophysics for the 2020s, is the seventh in a series of surveys produced every 10 years by the National Academies of Sciences, Engineering, and Medicine. Many of today’s most powerful and scientifically productive ground- and space-based telescopes were built following the recommendations of earlier decadal surveys.

The decadal survey report’s recommendations include a balance of small, medium, and large initiatives, as well as a broad strategy for developing and supporting ground- and space-based observatories across the electromagnetic spectrum and in the new windows of gravitational waves and high-energy neutrinos. In addition, the report makes detailed recommendations for foundational activities, providing a path to invest in the people, the research, and the technology that drive astronomy and astrophysics advances.

The 20-member Astro2020 steering committee, co-chaired by Fiona Harrison (California Institute of Technology) and Robert Kennicutt Jr. (University of Arizona and Texas A&M University), surveyed the entire field, from science to infrastructure, and assessed ground- and space-based activities in astronomy and astrophysics, including both new and previously identified concepts. Their resulting recommendations are addressed to the agencies supporting the field (chiefly NASA, the National Science Foundation, and the Department of Energy), the Congressional committees with jurisdiction over those agencies, the scientific community, and the public.

During its lengthy study, the Astro2020 steering committee carefully weighed input from the nation’s astronomers and astrophysicists. More than 141 experts served on the 13 science, program, and state-of-the-profession panels that provided recommendations to the steering committee. These panels read and assessed a total of 572 science “white papers” — authored by more than 4,500 individuals — that laid out a wide array of questions the astronomy and astrophysics community is now poised to answer. In addition, nearly 300 additional reports were considered describing the state of the profession and activities and projects.

“The Astro2020 report recommends a ‘technology development first’ approach in the construction of large missions and projects, both in space and on the ground,” comments Joel Bregman (University of Michigan), chair of the AAS Committee on Astronomy and Public Policy. “This will have a profound effect in the timely development of projects and should help avoid budgets getting out of control.”

The AAS has formed an ad hoc group to proactively support the ongoing work of the co-chairs and to coordinate with other stakeholders in advocating for implementation of the survey. Former AAS President Megan Donahue (Michigan State University), who is leading this effort, notes, “We welcome the efforts of our entire community in realizing the vision laid out in the report.”

“The US astronomy community has made great progress advancing our science by coming together every decade to establish our priorities and identify our funding needs,” adds AAS Executive Officer Kevin B. Marvel. “History shows that this process is a recipe for successful discovery: investments are ultimately made, instruments are built, and our understanding of the universe grows. The AAS looks forward to working with members of our community to advance the latest priorities and lay the groundwork for the exciting research results of the future.”

Pathways to Discovery in Astronomy and Astrophysics for the 2020s:
https://www.nap.edu/catalog/26141/pathways-to-discovery-in-astronomy-and-astrophysics-for-the-2020s

450 x 582 jpg, 202 kilobytes
https://aas.org/sites/default/files/inline-images/Astro2020ReportCover.jpg
Cover of the Astro2020 decadal survey report, Pathways to Discovery in Astronomy and Astrophysics for the 2020s. Credit: National Academies of Sciences, Engineering, and Medicine.

29 Nov 2021
The American Astronomical Society enthusiastically endorses the Astro2020 decadal survey and urges the astronomical community to support the report and its priorities.