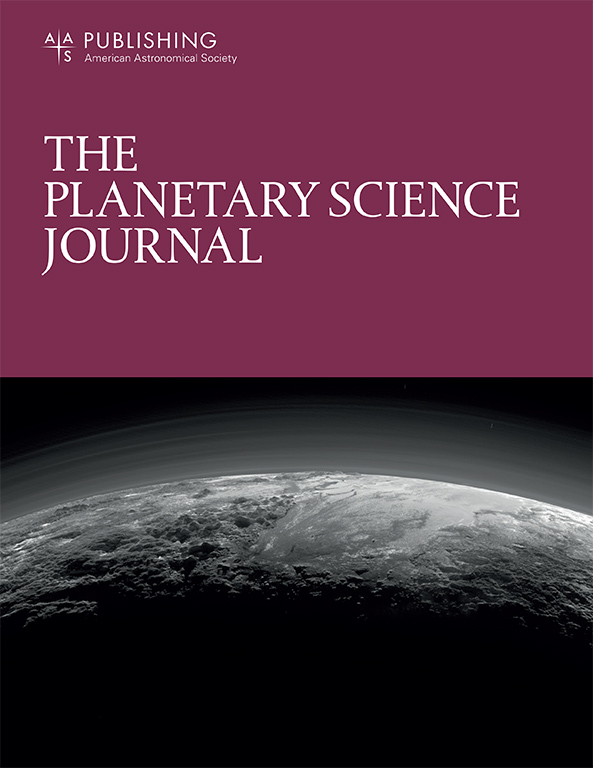 Research articles reporting significant developments, discoveries, and theories about planets, moons, small bodies, and the interactions among them will soon have a new showcase: The Planetary Science Journal (PSJ). This online publication is being launched by the American Astronomical Society (AAS), the major organization of professional astronomers in North America, in conjunction with the largest of its six topical divisions, the AAS Division for Planetary Sciences (DPS). The new journal will publish important research directly relevant to our solar system and other planetary systems, including observational results, theoretical insights, modeling, laboratory studies, instrumentation, and field studies.

PSJ joins the Astronomical Journal (AJ), the Astrophysical Journal (ApJ), ApJ Letters (ApJL), and the ApJ Supplement Series (ApJS) as the newest of the AAS's peer-reviewed research journals, which are produced in partnership with IOP Publishing in the United Kingdom. But PSJ will differ from AJ and the ApJ family in an important way: It will be entirely "gold open access," meaning all its articles will be free for all to read immediately upon publication. Though the other AAS journals allow authors to publish their articles under the gold open access model for an additional fee, the default for those journals is "green open access," in which articles are available only to paid subscribers for the first year and then freely to anyone after that period.

Like the other AAS journals, PSJ will feature a quick turnaround from receipt through review to publication. The Editor of the new journal is yet to be named; the AAS and DPS have launched a search among the community of planetary scientists and expect to have someone in place soon. The PSJ Editor, along with Ethan Vishniac, Editor in Chief of the AAS journals, will rely on a combination of established AAS Science Editors and new Science Editors for the PSJ — along with the AAS Publishing team — to guide submissions through peer review and revision and then transmit accepted manuscripts to IOP Publishing for online publication.

"Our goal in launching this journal," explains Vishniac, "is to provide a nonprofit venue for publication of research in this field that is driven only by our desire to help planetary scientists disseminate their results to the broadest possible audience, in the most comprehensive and useful way, and at the lowest possible cost to everyone."

According to DPS Chair Linda Spilker (Jet Propulsion Laboratory), now is an ideal time to create a new outlet for the publication of planetary science research. "Dozens of countries are now involved in the exploration of the solar system," she says. "Spacecraft are transmitting images and other observations from within the orbit of Mercury to beyond the orbit of Pluto, producing a data deluge that's keeping a growing number of scientists and students busier than ever. With so much information coming from distant robotic explorers, Earth-orbiting observatories, ground-based telescopes, and planetary scientists in the field and in their labs," adds Spilker, "it's critical to get new findings into the community's and public's hands quickly, and the Planetary Science Journal will help do just that."

"I'm excited about this new venture," says AAS President Megan Donahue (Michigan State University). "The DPS is our Society's largest division, but most of the research published in our journals has involved stellar, galactic, and extragalactic astronomy and astrophysics. With PSJ we'll now be able to showcase planetary science more effectively. This new journal will benefit not only the research community, but also students of all ages. I know there is broad interest in new findings about our own solar system as well as the many exotic planets we're now discovering around other stars."

The American Astronomical Society (AAS), established in 1899, is the major organization of professional astronomers in North America. Its membership of approximately 8,000 also includes physicists, mathematicians, geologists, engineers, and others whose research interests lie within the broad spectrum of subjects now comprising the astronomical sciences. The mission of the AAS is to enhance and share humanity's scientific understanding of the universe, which it achieves through publishing, meeting organization, education and outreach, and training and professional development.

The AAS Division for Planetary Sciences (DPS), organized in 1968, is the largest of the Society's six special-interest divisions. DPS members and affiliates study the bodies of our own solar system — from planets and moons to comets and asteroids — and all other solar system objects and processes. With the discovery that planets exist around other stars, the DPS has expanded its scope to include the study of extrasolar planetary systems as well.