The American Astronomical Society (AAS), the major organization of professional astronomers in North America, has established a new accolade, Fellow of the AAS, to honor members for extraordinary achievement and service. AAS Fellows will be recognized for original research and publication, innovative contributions to astronomical techniques or instrumentation, significant contributions to education and public outreach, and noteworthy service to astronomy and to the Society itself. 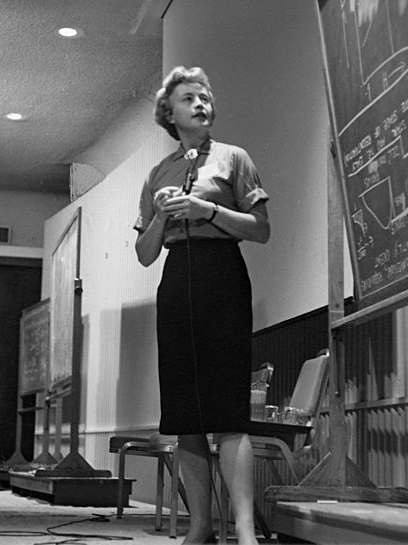 An initial group of more than 200 Legacy Fellows has been designated by the AAS Board of Trustees. These include past recipients of certain awards from the AAS or its topical Divisions, distinguished AAS elected leaders and volunteer committee members, and previously unrecognized individuals with long histories of outstanding research, teaching, mentoring, and service. Among this first class of honorees, E. Margaret Burbidge — the first woman to serve as AAS President (1976-1978) — was singled out as Inaugural Fellow. (She's pictured here in a 1964 photo from Sky & Telescope's archive.)

“The Board is simply thrilled to honor Margaret in this way,” says current AAS President Megan Donahue (Michigan State University). “At 100 years old, she has seen almost the full history of the Society! She has been an inspiration for so many, especially women like me who use large telescopes, something not possible before Margaret famously broke the observatory gender boundary in the mid-20th century.”

Many other scientific societies acknowledge their members’ scientific accomplishments and service to the field by electing them as Fellows, something the AAS hasn’t done before. “Our members were missing out on the opportunity to not only celebrate the accomplishments of individual astronomers,” says Donahue, “but also the success of the field more generally.” It’s not just a feel-good exercise, she explains. “The places where scientists work look to external indicators of contributions and service. Especially for those of us employed in physics or other physical sciences departments, the AAS Fellows program will increase the visibility and prestige of astronomy within our organizations.”

Beginning this year, there will be an annual call for nominations of new AAS Fellows. (We're still working on the nomination form and instructions and will make another announcement when we open the call.) Since the intent is to reward career achievement and service, nominees are expected to have been full members (as opposed to, say, student members) of the AAS for at least 5 consecutive years or 10 non-consecutive years. Under special circumstances, long-term international, educator, alumni, or amateur affiliate members who meet similar requirements may also be eligible. A yet-to-be-established AAS Fellows Selection Committee will evaluate the nominations and forward the ones they approve (up to 0.5% of the number of current full members of the Society) to the Board of Trustees for ratification.

“I know that future AAS Presidents will take great pleasure,” says Donahue, “in announcing the new class of Fellows during the prize ceremony that is a highlight of every winter AAS meeting.”

Image:
https://aas.org/sites/default/files/2020-02/E_Margaret-600p.jpg
AAS Inaugural Fellow E. Margaret Burbidge, who celebrated her 100th birthday in August 2019, had a long and stellar career in multiple fields of astrophysics. One of her most significant achievements was helping to formulate our understanding of nucleosynthesis in stars. Among positions she held in her lifetime were director of the Royal Greenwich Observatory and President of the American Astronomical Society, both the first time that a woman filled the post. This photo shows Burbidge in Dallas, Texas, in February 1964. Credit: Sky & Telescope.

The American Astronomical Society (AAS), established in 1899, is the major organization of professional astronomers in North America. Its membership of more than 8,000 also includes physicists, mathematicians, geologists, engineers, and others whose research interests lie within the broad spectrum of subjects now comprising the astronomical sciences. The mission of the AAS is to enhance and share humanity's scientific understanding of the universe, which it achieves through publishing, meeting organization, education and outreach, policy advocacy, and training and professional development.