Smartphones in the Astronomy Classroom

I had been away from teaching for several years (2014 through 2017) and, upon return to the classroom, I observed the environment with a fresh perspective. I remembered that students commonly had smartphones in the past, but their importance to students had risen a few notches over my three years away. I had read statistics about rising smartphone abundance and the special affinity that college-age students had for them, but it was still striking to witness it firsthand. I observed students surfing and texting on smartphones in the hall before class, as soon as they sat down in my classroom, and too often during my class. I wondered if this focus on their devices could be redirected toward interactive engagement with curricular materials in the astronomy classroom. My group has always worked on computer-based astronomy teaching materials (many of which are available at https://astro.unl.edu), with an emphasis on simulations, and we formulated a plan to deliver similar materials on students’ personal devices.

Simulations targeted at smartphones in the classroom need to be different from those designed for desktop computers. There are smaller amounts of screen space to work with and limited time for exploration, which require simulations that explore a smaller, more focused, parameter space. We decided on other simulation characteristics that included: adaptive layout (resizing for devices of different resolution and portrait/landscape layout), SVG graphics (maintaining sharpness at all resolutions), and pointer events (handling multiple methods of input).

However, we believe that the most important simulation characteristic for learning efficacy is embedded questions. Students require focus and guidance in their explorations, and we wanted to accomplish this without asking students to read directions. Our questions are numbered to allow instructors to easily assign them. Some questions place one component of a simulation in a certain state, hide another component, and then ask students to visualize its appearance.

We began using smartphone simulations with students in the fall of 2021. Note that QR codes are an important part of the process of getting students to utilize a simulation. A QR code can be included on a PowerPoint slide, and students then view the QR code with their smartphone’s camera, which automatically loads the corresponding URL into the browser.

Our first substantial smartphone creation was the Eclipse Explorer (funded by the NASA Nebraska Space Grant), a suite of five separate simulations exploring various aspects of eclipses. A sample instructional PowerPoint slide assigning questions related to exploring the types of eclipse shadows and the angular diameter of the moon is shown below. Note the distinctive components of the slide: descriptive title, QR code, URL (for the few students on laptops), screenshot (to give students confidence they have arrived at the correct location,) and assigned embedded questions. Blog readers are encouraged to use their smartphones to access this resource using the QR code. 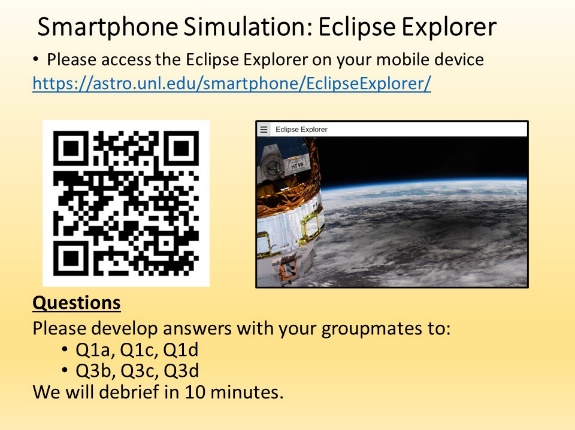 A screenshot of the Labeled Shadow Diagram (the first simulation in the suite) is shown below. This simulation allows students to visualize the three types of shadow in clearly demarcated regions and in a realistic form, where the shading at each location is indicative of the percentage of light obscured. The appearance of the eclipse from various locations in the image can be visualized using either a two-dimensional screen that can be dragged through the shadow zones or what an eye would see at a particular point. Special emphasis is placed upon the significance of the boundary between umbra and antumbra as this is the boundary between regions where total and annular eclipses can be observed. The second assigned simulation focuses upon the angular diameter of the moon at various distances in its orbit and its relation to this boundary point. We typically held a short debriefing discussion on the most significant aspects of the assigned questions. 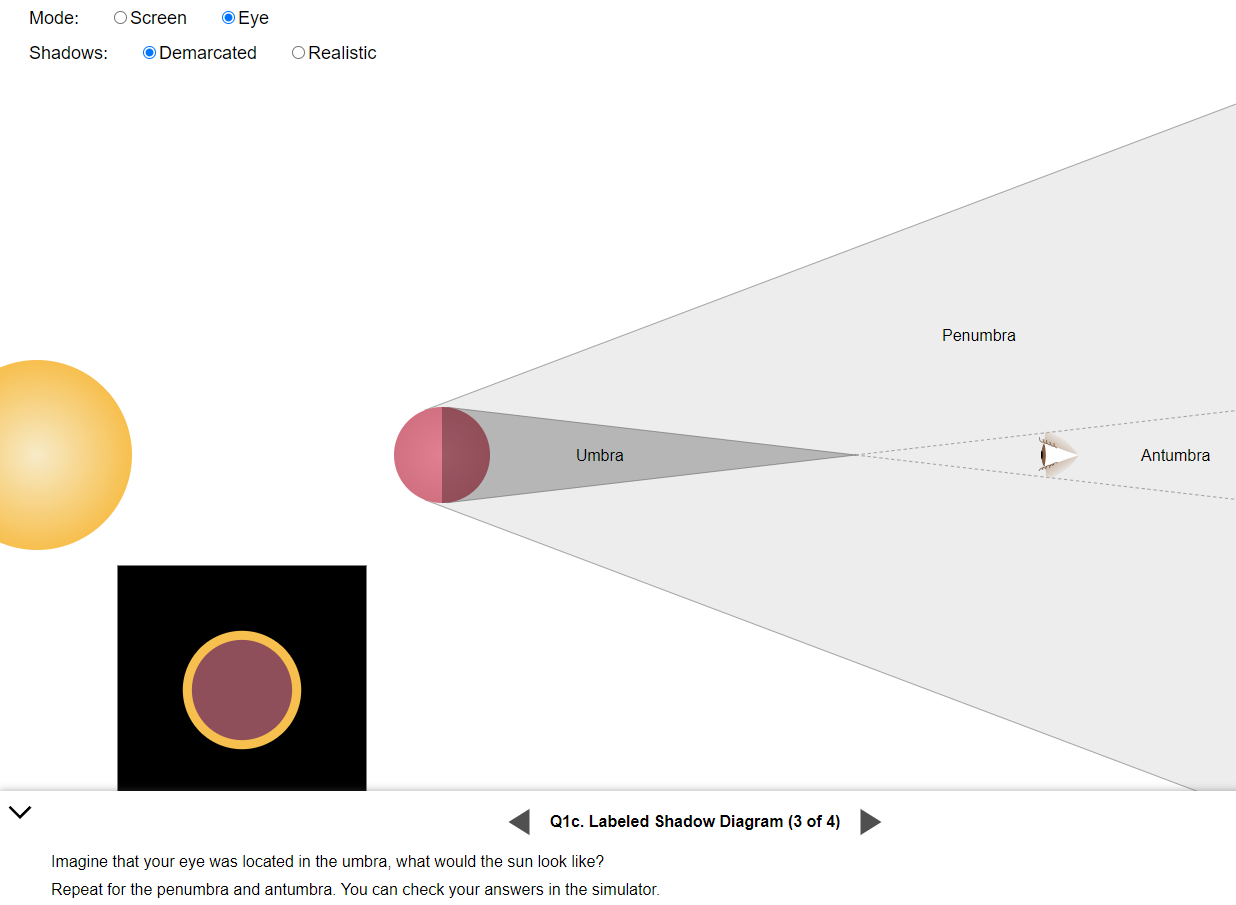 Fig. 2: Using the Labeled Shadow Diagram to simulate the appearance of the sun from various shadow locations

I have chosen to emphasize eclipses in this blog post because of the major upcoming solar eclipses visible in the United States (annular on 10/14/2023, total on 9/8/2024). We believe that the Eclipse Explorer has significant utility in the astronomy classroom as well as in eclipse outreach events for facilitating understanding of eclipses.

We also have mature smartphone simulation suites in the areas of Star Trails (showing motions on the celestial sphere and cardinal point perspectives) and Planetary Positions (illustrating both ecliptic plane and horizon diagram representations). Additional simulations are in development (see https://astro.unl.edu/smartphone/).

Our thinking in this area is encapsulated in the video series on YouTube titled “Smartphones in the Astronomy Classroom,” whose development was funded by an AAS Education and Professional Development Mini-Grant. The entire series is available on this YouTube Playlist. The video titles and their underlying foci include: Why Smartphones (explaining the move in this direction), Design Framework (characteristics of our smartphone simulations), First Practices (explanation of classroom pedagogy), and Smartphone Challenges (obstacles to be conquered).

It will be a while before we have smartphone simulations covering all of the topics of introductory astronomy. Thus, in addition to modest PhET simulations, we also have students accessing HTML5 ranking tasks (see https://astro.unl.edu/newRTs/) on their smartphones and voting on peer instruction questions. We have found that students have good access to mobile devices and sufficient bandwidth in the classroom to access the materials. The compatibility between the code and their devices has been good, and students are eager to make use of the devices they so treasure. We are moving toward a digital classroom on a number of fronts and have yet to experience a serious obstacle in the process. There are reasons to think that this pedagogical approach will be successful in regards to conceptual learning gains and student engagement, but future educational research will be the judge.