Today free software has been released to help the blind and visually impaired (BIV) explore the universe through sound. With the support from the National Science Foundation’s STEM+C Program, Innovators Developing Accessible Tools for Astronomy (IDATA) brought together nearly 200 BIV and sighted students, teachers, astronomers, and programmers from across the nation to create this innovative software called Afterglow Access. The software can be used through your web browser and is available via the Resources tab at https://idataproject.org. No software download is required for use.

Astronomy often brings to mind beautiful images of multicolored gas and dust giving birth to new stars and planets, incredibly detailed spiral arms in galaxies millions of light-years away, but many of these images are created by detecting the invisible spectrum of light. Astronomical images are generated by computers with light gathered from distant objects using telescopes and a variety of detectors. This light is converted into numerical data and computers use that data to generate the images we see. In reality, we are all “blind” to this data, and scientists have historically chosen to convert these numbers into images. The recently released Afterglow Access software is unique in that it gives the user the option to sonify this data turning numbers into audible notes instead of pictures. 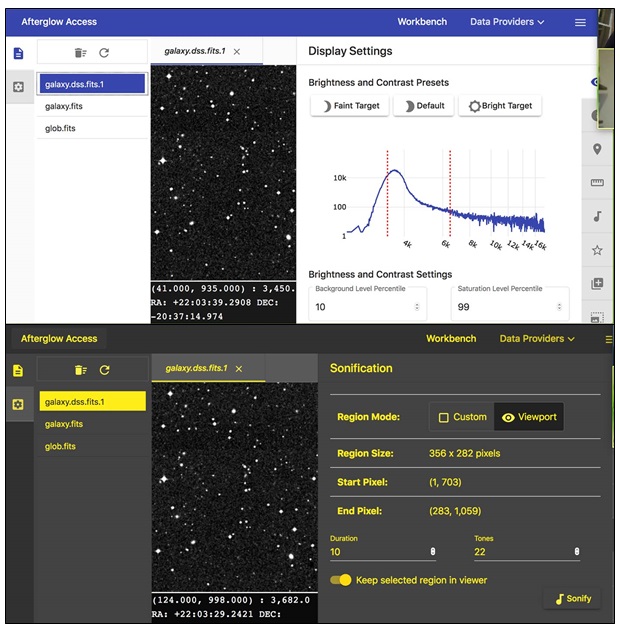 IDATA students and teachers worked with a team of researchers to explore computation in astronomy through participation in user-centered design/universal design processes. The team iteratively developed and tested the software and learning resources, improving the accessibility for educational and professional uses. The project builds on the success of prior NSF-supported research, including the development of Afterglow, the Quorum programming language, and the Skynet Junior Scholars portal that supports collaborative astronomy investigations with the Skynet international network of telescopes.

“IDATA and Afterglow Access are the result of great teamwork between students and teachers and all of the partner institutions, but none of it would have happened without the support and vision of the National Science Foundation,” said Dr. Tim Spuck, AUI’s STEM Education Development Officer. “This was a high-risk project and NSF believed in our team and we delivered. We are hopeful that with additional future support, we can continue this innovative and potentially transformative work.” Currently a team in Chile at Universidad Diego Portales is working to translate the software into Spanish, allowing for greater accessibility in the BVI Spanish-speaking community. The IDATA program and Afterglow Access envision using future versions of the software to sonify data in additional fields, including medicine and geosciences.