Future of US Science Policy Discussed in New Publication

This post is adapted from a National Academy of Sciences press release: 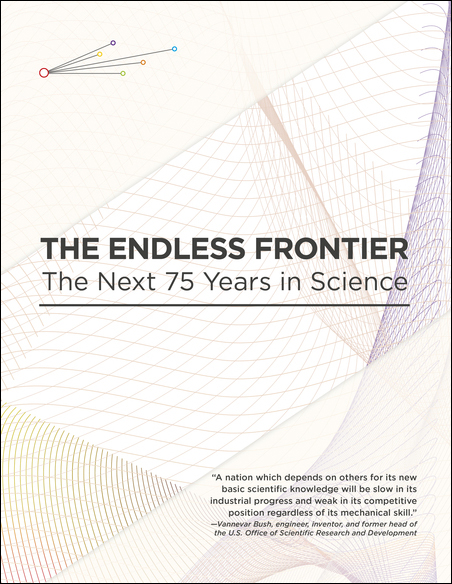 The National Academy of Sciences has released the proceedings of a symposium that explored whether the modern research architecture that fuels US innovation needs to be reconfigured to meet the challenges of our time. The symposium, held on 26 February 2020 at the National Academy of Sciences, gathered top business, academic, and government leaders to debate the future of science policy in the US and how it can best serve society in the 21st century.

The event was held in partnership with the Kavli Foundation and the Alfred P. Sloan Foundation to mark the 75th anniversary of the publication of Vannevar Bush’s seminal report Science: The Endless Frontier, which created a blueprint for US scientific research in the post-World War II era. It empowered government support for innovation and basic research at the nation’s universities and the policies that ultimately drove US prosperity, health, and national security.

The summary examines the future of pathways to leadership in science, how to respond to changes in the research enterprise, communicating science, the evolution of the government-university partnership, and connecting basic research with economic growth in the decades to come. It draws on remarks from luminaries such as these:

In her opening remarks, Marcia McNutt, president of the National Academy of Sciences, said that while no one knows what changes the next 75 years might bring, “The stakes are high.” She added, “We need to find ways to make all of our institutions, including my own, more responsive and nimble in a fast-moving world. We must ask if we are doing enough to inspire, nurture, and cultivate our young people. We have to encourage diversity and inclusion and create an informed citizenry that values decision-making and policies based on science and evidence.”

The proceedings may be read online for downloaded as a free PDF.