This post is adapted from an American Institute of Physics press release: 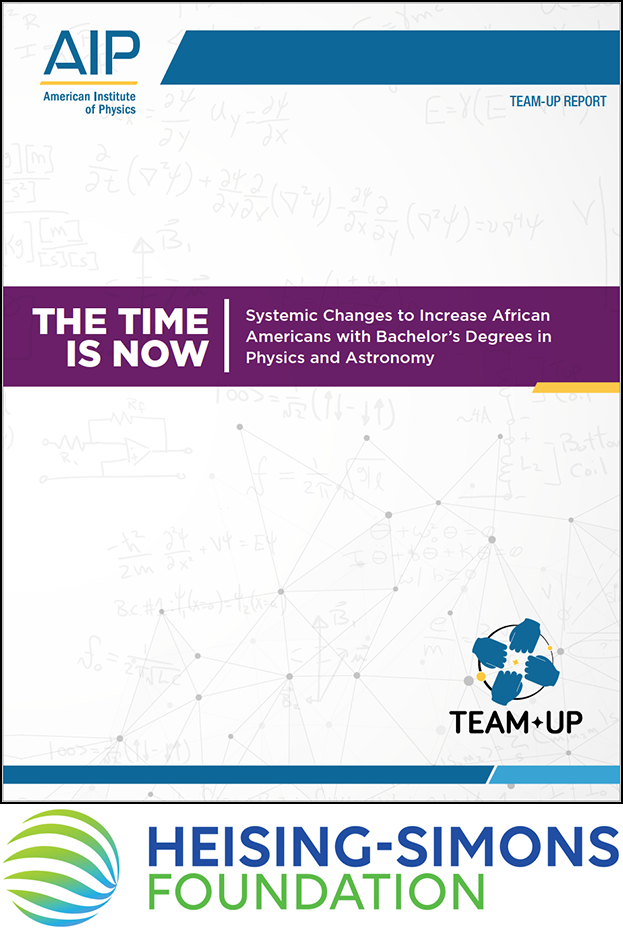 The American Institute of Physics (AIP) is pleased to announce that a $200,000 grant from the Heising-Simons Foundation will fund workshops to help reach the goal of doubling the number of African American physics and astronomy undergraduate degree recipients by the year 2030.

AIP’s hosting these workshops is an important next step in implementing evidence-based recommendations from AIP’s expert report produced by the National Task Force to Elevate African American Representation in Undergraduate Physics & Astronomy, also known as TEAM-UP. The task force was chartered and funded by AIP to examine the persistent underrepresentation of African Americans in physics and astronomy in the US and released its findings at the 235th AAS meeting in January 2020.

“The Heising-Simons Foundation grant will help AIP achieve critical first milestones in catalyzing a communitywide dialog about how to pursue these important challenges for our community,” said Michael Moloney, CEO of AIP. “I hope the recommendations in this task force report are taken seriously and enthusiastically implemented to achieve our goals. AIP and its member societies are committed to promoting increased diversity, equity and inclusion in the physical sciences.”

The Heising-Simons Foundation approved a grant to fund two AIP-led workshops to begin implementation of the recommendations provided in the TEAM-UP report. The workshops will bring together leaders from physics and astronomy departments and from professional societies to begin department-level sense-making and strategic planning.

In the report, “The Time Is Now: Systemic Changes to Increase African Americans with Bachelor’s Degrees in Physics and Astronomy," the task force discusses the five factors it discovered as responsible for the success or failure of African American students in physics and astronomy: belonging, physics identity, academic support, personal support, and leadership and structures.

Since then, there has been outpouring of support for the report and its findings, and questions about how organizations and educational institutions can begin to effect change toward increasing opportunities for African Americans in the physical sciences.

The two workshops are tentatively scheduled for the second half of 2020. AIP is working with the National Society of Black Physicists, the American Astronomical Society, the American Association of Physics Teachers, and the American Physical Society. Representatives from these plus others from physics and astronomy departments will make up the workshop attendees.

Workshop 1 will focus on bringing together the departments and institutions, hearing about success stories and guiding attendees toward developing strategic implementation plans along the lines of those outlined in TEAM-UP report. Workshop 2 will focus on refining these plans to take back to their organizations and broadening the coalition of departments committed to achieving the TEAM-UP recommendations.

The outcome of the workshops will be a collaborative plan to achieve the primary goal of doubling African American bachelor’s degrees awarded each year in physics and astronomy to approximately 500 per year by 2030.