Co-Chairs Named for Decadal Survey on Planetary Science and Astrobiology

This post is adapted from announcements by the National Academies and Southwest Research Institute:

Robin Canup (Southwest Research Institute) and Philip Christensen (Arizona State University) will co-chair the Decadal Survey on Planetary Science and Astrobiology recently launched by the National Academies of Sciences, Engineering, and Medicine (NASEM). The Decadal Survey is an independent activity undertaken by NASEM and sponsored by NASA and the National Science Foundation. Through a rigorous review process, the survey will assess the state of the field of planetary science, identify the most important scientific questions, rank the importance of future NASA missions, and present a comprehensive research strategy for the timeframe of 2023 to 2032. Solar system exploration, astrobiology, and aspects of planetary defense against asteroid impacts are major focuses of the survey. 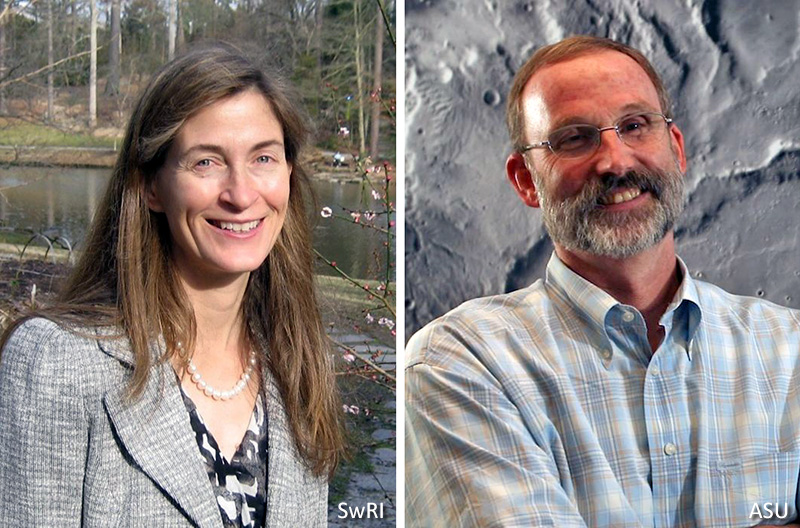 Canup, a member of the National Academy of Sciences (NAS), is a theoretician who utilizes numerical simulations and analytical methods to study the formation and early evolution of planets and their moons. She has modeled many aspects of the formation of the Moon, including hydrodynamical simulations of lunar-forming impacts, the accumulation of the Moon and its initial composition and orbital evolution, and how bombardment may have affected Earth-Moon isotopic compositions. Her models for the origin of the large satellites of the gas giant planets have emphasized the potential early loss of satellites due to gas-driven orbital decay, and how this process may both select for the similar observed ratios between the current satellite system masses and their host planets and provide a potential mechanism to produce icy rings at Saturn. Canup has also developed models for an impact origin of the satellite systems of Pluto and Mars. She was the recipient of the 2003 Urey Prize of the AAS Division for Planetary Sciences and the 2004 Macelwane Medal of the American Geophysical Union (AGU), and she was elected to the NAS in 2012 and to the American Academy of Arts and Sciences in 2017. She earned her PhD and MS in astrophysics and planetary sciences from the University of Colorado, Boulder.

Christensen's research interests focus on the composition, processes, and physical properties of Mars, Earth, asteroids, Europa, and other planetary surfaces. Christensen uses spectroscopy, radiometry, field observations, and numerical modeling to study the geology and history of planets and moons. A major facet of his research is the development of spacecraft instruments, and he has built six science instruments that have flown on NASA’s Mars Observer, Mars Global Surveyor, Mars Odyssey, Mars Exploration Rovers, and OSIRIS-REx missions. He is currently developing infrared instruments for the UAE’s Hope Mars mission and NASA’s Europa Clipper and Lucy Discovery missions. Over the past 20 years he has developed an extensive K-12 education and outreach program to bring the excitement of science and exploration into the classroom. Christensen is a Fellow of the American Geophysical Union and the Geological Society of America (GSA) and received the AGU’s Whipple Award in 2018, the GSA’s G. K. Gilbert Award in 2008, NASA’s Public Service Medal in 2005, and NASA’s Exceptional Scientific Achievement Medal in 2003. He received his PhD in geophysics and space physics from the University of California, Los Angeles.