The AAS is pleased to announce a new collaboration with the Department of Astronomy and Astrophysics at the University of California, Santa Cruz, to expand UCSC’s Donald and Irene Osterbrock Leadership Program (OLP) to additional universities and other institutions with astronomy graduate programs that wish to commit to the training of graduate students in science leadership.

A generous gift to the AAS from the Peter and Patricia Gruber Foundation has enabled a four-year pilot program, to be jointly coordinated by the AAS and UCSC, that will provide matching funds of up to $20,000 annually to each of two to five “nodes” to create their own programs to train future leaders in astronomy and astrophysics.

Formal leadership training of graduate students is almost nonexistent in the United States, and the enthusiastic response of students to the UCSC program over the last six years has revealed its potential. The goal of the Gruber gift is to facilitate the creation of programs similar to the UCSC OLP on a national level that will have a major impact on the development of US science leadership. Representing a new dimension for any department, such a program, if successful, will serve to attract a broader, more diverse spectrum of capable students who wish to develop skills that will benefit their work in every aspect of science. 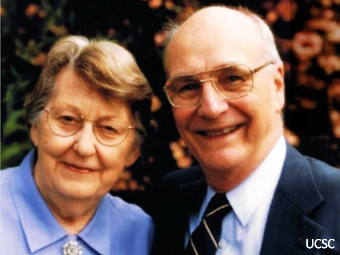 The name of the new program is the National Osterbrock Leadership Program (NOLP). Like the OLP itself, It is named in honor of Donald E. Osterbrock (1924-2007), eminent former Professor of Astronomy at UCSC, and his wife Irene Hansen Osterbrock (1926-2019), who helped establish the UCSC Library’s Mary Lea Shane Archives at Lick Observatory as a world-renowned repository of US astronomical history. Don Osterbrock received the AAS’s highest honor, the Henry Norris Russell Lectureship, in 1991, and Irene was named a Patron of the AAS in 2011.

US universities and other organizations with graduate astronomy programs are invited to apply to the NOLP. Detailed proposal guidelines are described on the AAS NOLP page, and proposers are encouraged to review current UCSC OLP activities. However, every proposing institution is free to craft and manage its own program independently, and innovations are encouraged.

The proposed activities should enable each student to develop a personal familiarity with good leadership, including decision-making skills, communication skills, team building, and mentoring. Students should come to appreciate the value of good leadership at all levels, from one-on-one personal interactions to large groups. Actual opportunities to put leadership skills into practice are essential. Students should also learn about the many leadership opportunities inside and outside of academia that will be available to them by virtue of their earning a PhD in astronomy or astrophysics, and therefore how enhancing their PhD with leadership training now can facilitate their future success.

New nodes will be selected by a committee appointed by the AAS Board of Trustees. UCSC will serve as an advisor to the AAS and will share advice and experience with all potential applicants. For the benefit of the wider astronomical community, at the end of the four-year pilot program all nodes including UCSC will jointly write a report describing best practices and lessons learned.

Through this novel collaboration, the AAS and the UCSC aim to facilitate an activity that we believe is crucial to the long-term development of astronomy and astrophysics on the national and international levels. We are hopeful that institutions responding to this opportunity will introduce valuable new concepts for leadership training and that the nodes working together will create a new norm for the PhD in astronomy or astrophysics. We further hope that the this new mode for graduate training will spread to other sciences and will further enhance the stature of US graduate education in the eyes of the world.

If you have any questions not already answered on the AAS NOLP page, feel free to contact Megan Donahue, Paula Szkody, Sandy Faber, or Bob Williams.