The second major release of the Chandra Source Catalog (CSC 2.0) is now complete and available for queries and downloads. This release contains 317,167 unique X-ray sources (315,868 compact and 1,299 highly extended sources) covering 550 square degrees of the galactic and extragalactic sky. With ~928,000 detections, the CSC 2.0 is the largest X-ray catalog to date. It makes X-ray astronomy studies readily accessible to the entire scientific community. 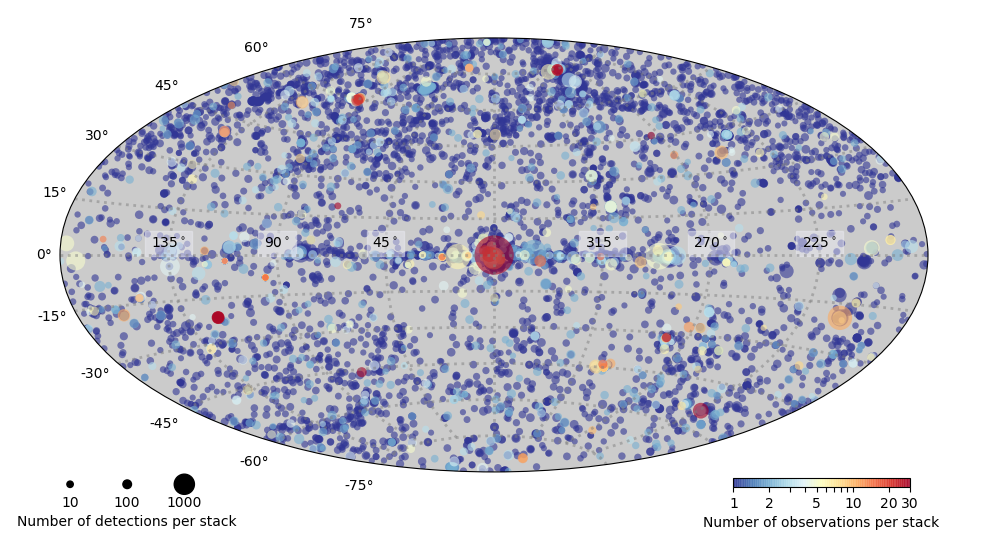 The CSC 2.0 is obtained from a uniform and coherent analysis of 10,382 ACIS and HRC imaging observations released publicly prior to the end of 2014. The ~1,700 per-source-properties recorded in the catalog include information across five energy bands (b, u, s, m, h) for the Advanced CCD Imaging Spectrometer (ACIS) and one band (w) for the High Resolution Camera (HRC). Along with tabulated data, the catalog includes 40 different types of data products per source (e.g., spectra, light curves, exposure maps, and even stacks of observations), enabling fast scientific analysis without going through any data processing.

Release 2.0 represents a significant improvement with respect to the previous catalog version, not just because of the increase in number of sources and area covered, but mostly for a significant improvement in source density (as shown in our release image) that is obtained by performing detection on stacks of observations, allowing us to reach the faintest sources in the X-ray sky.

The catalog can be queried using the CSCview, the WorldWide Telescope (WWT), the IVOA cone search, and the new CSC web interface, all available for download or browsing via the CSC 2.0 webpage.