This post is adapted from a National Academies press release: 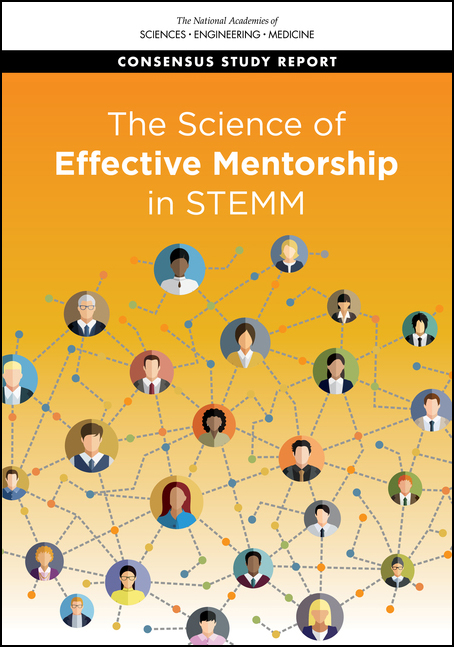 US colleges and universities should take a more intentional, inclusive, and evidence-based approach to mentoring students in STEMM (science, technology, engineering, mathematics, and medicine) — a shift that could engage and help retain a broader group of students in these fields, says a new report from the National Academies of Sciences, Engineering, and Medicine.

Effective mentoring relationships have an overall positive effect on academic achievement, retention, and degree attainment, as well as on career success and satisfaction, the report says. Mentored students pursue graduate study more frequently than students without mentoring support and are more likely to stay in STEMM. Mentorship can also increase access, equity, and inclusion in STEMM. Studies have shown, for example, that effective mentorship for students from underrepresented groups enhances their recruitment into and retention in research-related career paths.

Despite its importance, mentorship rarely receives the focused attention, evaluation, and recognition given to other aspects of professional development such as teaching and research, the report says. With few exceptions, the nation’s academic institutions have largely left mentorship to happen organically or on an ad hoc basis. Moreover, studies report that STEMM students from underrepresented groups typically receive less mentorship than their peers in well-represented groups.

“There is a gap between what we know about effective mentoring and how it is practiced in our nation’s colleges and universities,” said Angela Byars-Winston, chair of the committee that wrote the report, and professor of medicine at the University of Wisconsin, Madison. “A growing body of evidence exists about how to create and sustain successful, inclusive mentoring relationships. We hope that our report can catalyze institutions’ use of that evidence to create affirming environments and more effectively foster the talents of all of their students.”

The report was released along with an online interactive guide to support institutions, departments, and faculty members in implementing the report’s recommendations.

While every mentoring relationship is different, the report says, there are core behaviors of mentors and mentees that are more likely to yield effective mentoring relationships — such as aligning expectations, building rapport, maintaining open communication, and facilitating the agency of mentees. Mentorship is a learned skill, and programs developed to foster mentorship skills have been shown to help mentors and mentees advance their skills in multiple areas, the report says.

Typically, mentorship in STEMM is assumed to occur between one mentor and one mentee. While these “dyads” serve an important role, mentorship has expanded conceptually and operationally. Effective mentorship structures include triads, collective or group mentoring, mentoring networks, and emerging online and e-mentoring communities. These structures can provide additional benefits, the report says, including varying perspectives.

Many STEMM faculty mentors may downplay or de-emphasize cultural and social diversity in mentoring relationships and believe that “colorblindness” is desirable, neglecting the fact that important cultural and social identities shape their mentees’ academic experiences. Culturally responsive mentoring — in which mentors, regardless of their race or gender, show interest in and value students’ cultural backgrounds and social identities — may help students navigate invalidating experiences in academia, affirm their belonging in STEMM contexts, and reinforce their belief in their own ability to be successful in STEMM.

Many underrepresented students prefer to have mentors of the same race and/or gender, but the opportunity to maximize same-race, same-gender mentorship is challenged by the scarcity of underrepresented faculty in STEMM. Prior research is limited regarding the importance of demographic matching between mentor and mentee to mentee academic or career development, but at least some research supports the notion that shared beliefs, values, and interests are more predictive of relationship quality and desirable mentee outcomes than are shared demographic characteristics. Having a mentor of the same gender and racial/ethnic background is not necessarily associated with differences in outcomes such as grade point average, self-efficacy, or confidence about their fit in science. Growing evidence confirms that mentors of different identities can work intentionally to be culturally responsive and to understand power dynamics and oppression, and consequently can be well positioned to successfully meet the mentoring needs of underrepresented students.