This Month in Astronomical History: April

Each month as part of this series from the AAS Historical Astronomy Division, an important discovery or memorable event in the history of astronomy will be highlighted. This month's guest author, Sara Turriziani (RIKEN), focuses on the BeppoSAX mission launched in April 1996. Interested in writing a short (500-word) column? Instructions along wth previous history columns are available on the HAD webpage.

The Italian-Dutch SAX (Satellite per l’Astronomia a raggi X [Satellite for X-ray Astronomy]) was launched from Cape Canaveral on 30 April 1996 with the primary goal to better characterize celestial sources emitting X-rays. Its instruments covered for the first time a very wide range of energies, from 0.1 keV to 600 keV. It was later renamed BeppoSAX to honor the Italian physicist Giuseppe “Beppo” Occhialini.1 BeppoSAX marked the end of one era and the beginning of another in the study of gamma-ray bursts (GRBs).

The discovery of GRBs happened by chance in the middle of the Cold War, after the Soviet Union and the United States signed a treaty for the partial ban of nuclear tests in the 1960s. Americans launched the Vela satellites, equipped with sensitive X-ray and gamma-ray instruments, to see if the Russians were testing nuclear bombs in the atmosphere and space. Their name comes from the Spanish verb velar, meaning “to watch over.” On 2 July 1967 the Vela satellites revealed a very brief but very intense flash of high-energy light. It was immediately clear that the Russians were not violating any agreement, since the instruments, though unable to locate the exact direction of the signal, managed to exclude that it originated within the solar system. No one was able to explain this cosmic phenomenon hitherto unknown, whose detection was initially classified as a US military secret. Only six years later, after the discovery of several other GRBs, were Los Alamos astronomers allowed to publish an article.2

For two decades after the initial discovery, several satellites continued to record GRBs, and about 100 different models were proposed, yet a clear explanation was still missing. The most urgent question was to determine at what distance they were from Earth. A new milestone was set when the Compton Gamma Ray Observatory, launched in 1991, established that GRBs come from all celestial directions. Although this finding hinted that the sources were at cosmological distances3, it could not exclude that they were instead much closer, in the halo of the Milky Way.4 Unfortunately, at the time the positional accuracy of gamma-ray detectors was too poor to allow for follow-up to detect the so-called afterglow emission, predicted to accompany GRBs at lower energies.

BeppoSAX was the turning point in this 30-year-long debate when it detected GRB 970228 on 28 February 1997. Just a few hours later the satellite was re-oriented in order to observe the GRB at lower energies and discovered a fading X-ray afterglow from it.5 Moreover, the arcminute positional accuracy of this observation allowed Jan van Paradijs to measure transient optical emission associated with a very faint, very distant galaxy.6 For this epochal breakthrough, the BeppoSAX team and van Paradijs were awarded the 1998 Bruno Rossi Prize of the AAS High Energy Astrophysics Division.7

On 30 April 2002 the mission concluded its operations. Almost exactly one year later, on 29 April 2003, the satellite reentered Earth's atmosphere. Whatever pieces survived reentry sank into the Pacific Ocean. 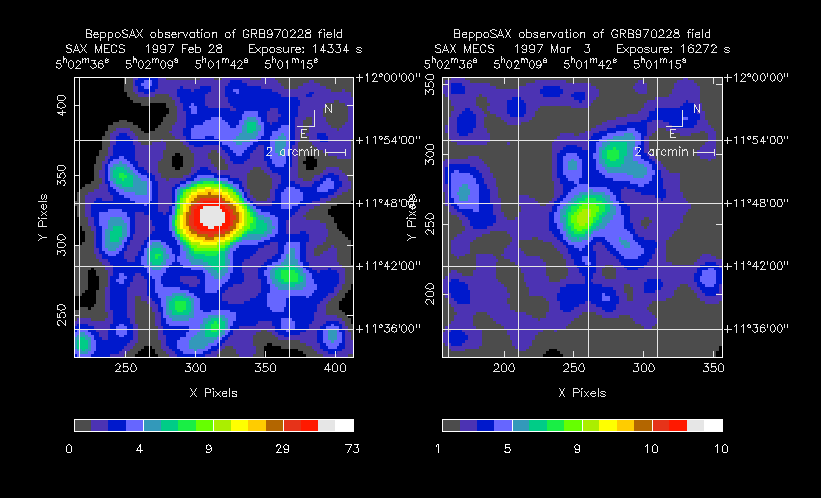 Luminosity evolution in the X-ray band of GRB 970228 observed by BeppoSAX in the first months of 1997: from 28 February (left panel) to 3 March (right panel) the energy decreased by a factor of 100. (Credit: BeppoSAX Team, ASI, ESA).