Each month as part of this series from the AAS Historical Astronomy Division, an important discovery or memorable event in the history of astronomy will be highlighted. This Month (November 2018), guest author Pedro M. P. Raposo (Adler Planetarium, Chicago) focuses on the popular iconography of November’s meteor showers.

To the ear of a dedicated stargazer, the word “November” will immediately strike a chord as the month of the Leonids. This annual meteor shower, which nowadays peaks around 17 November, may no longer be the most anticipated event of its kind, with the Perseids in August taking center stage. But not only did the Leonids prompt the development of meteor science, they also shaped the popular iconography of these phenomena for the better part of the nineteenth century.

The Leonids meteor storm of 12-13 November 1833 (a meteor storm is defined as a shower with 1,000 meteors per hour or more) was seen throughout the United States and proved pivotal in sparking discussion about meteors among the emerging scientific community of North America and beyond. Denison Olmsted (1791-1859), a professor of mathematics and natural philosophy at Yale University, compiled and published several descriptions of the 1833 storm as seen from Massachusetts to Georgia. [1] He played a leading role in placing the study of meteors on solid scientific grounds, thus paving the way to a broader understanding of their cosmic origins, which developed over the ensuing decades.[2]

The meteor storm of November 1833 also raised great popular interest. It was witnessed by a large number of people, and the resonance of meteor showers with biblical allusions of doom and final judgment was certain to trigger emotional reactions and lively debates.[3] Moreover, a burgeoning press avid for sensational copy picked up on vivid accounts of the event, with newspapers across the US appealing to local bravado in a sort of competition as to which town had counted the highest number of meteors, and thus witnessed a fuller celestial spectacle. [4]

The development of printing techniques and image reproduction processes also made it easier to illustrate reports and sections about meteors in newspapers, popular magazines, and schoolbooks. In that regard, the meteor storm of November 1833 would become a frequent motif (Figs 1-3). How could a dynamic phenomenon such as a meteor shower (or, for that matter, a meteor storm) be captured on a single rendition though?

Informed by meteor storms and hyped up by these visual strategies, images such as the examples shown here may have misguided many readers as to what they could normally expect from an annual meteor shower, even though these events could sometimes be unexpectedly impressive. Such was the case of another November shower, the Andromedids, which in 1872 produced a memorable storm, eventually replacing the Leonids of 1833 as a chief motif for popular illustrations of such phenomena (Figs. 4 and 5).

Astronomy is no stranger to hype, and in a time when astronomical content was increasingly featured in public lectures, popular and didactic publications, and public observing events,[5] it is not surprising that authors and publishers would want to embellish their products with spectacular, even if somewhat misleading imagery — and more so when it came to visualize cosmic fireworks on paper.

[1] Steven J. Dick, ‘Observation and interpretation of the Leonid meteors over the last millennium, Journal for Astronomical History and Heritage 1 (1998): 1-20.

[3] On the broader cultural and religious meanings of comets and meteors and their representations, see: Sara Schechner, Comets, Popular Culture, and the Birth of Modern Cosmology(Princeton University Press, 1999); Roberta J. M. Olson, Jay M. Pasachoff, Fire in the Sky: Comets and Meteors, the Decisive Centuries, in British Art and Science (Cambridge University Press, 1998). 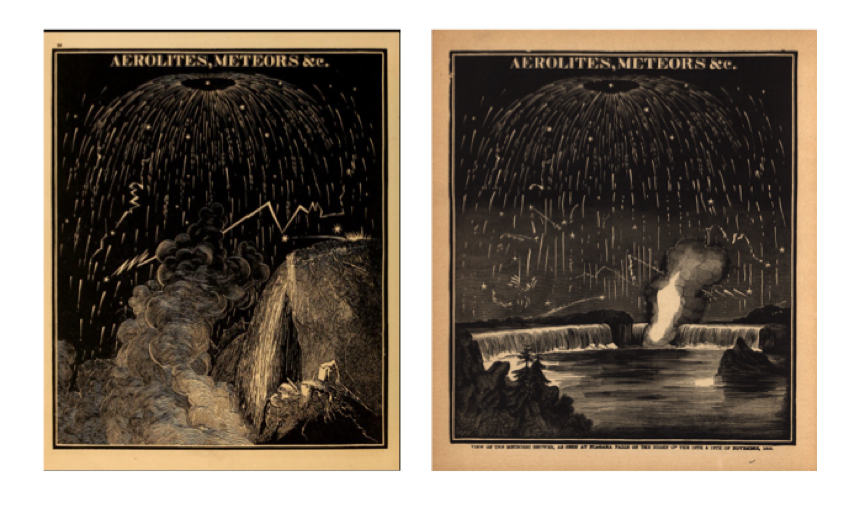 Figs. 1 and 2 - Depictions of the Leonid meteor storm of 1833 over Niagara Falls, from two different editions of Asa Smith’s Illustrated Astronomy, respectively published in 1856 and 1889.  The overtly dramatic, almost apocalyptic scene on the left eventually gave way to the more sober and encompassing rendition on the right. These illustrations were likely based on a similar image originally published in Mechanics Magazine in November 1833 (see M. Littman, The Heavens of Fire, p. 14). Image credits: University of Illinois Urbana-Champaign (via Internet Archive) and Adler Planetarium. 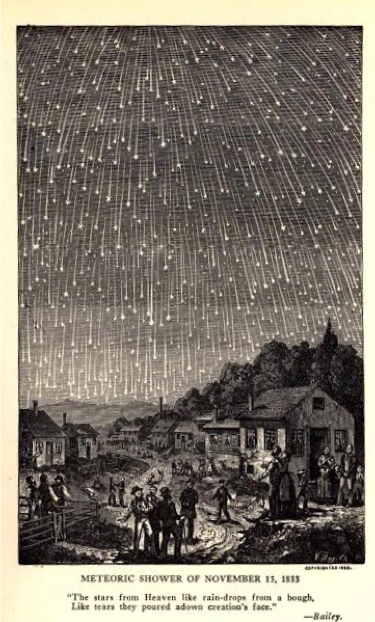 Fig. 3a - Often cited as the most widely seen rendition of the November 1833 meteor storm, this illustration was actually presented for the first in 1888, in a weekly publication of the Seventh-day Adventists Church. The version shown here is taken from Florence Armstrong Grondal’s The Music of the Spheres (1926).  On the history of this image, see David Hughes, ‘The World’s Most Famous Meteor Shower Picture’, Earth, Moon, and Planets 68 (1995): 311-322. Image credits: Adler Planetarium. 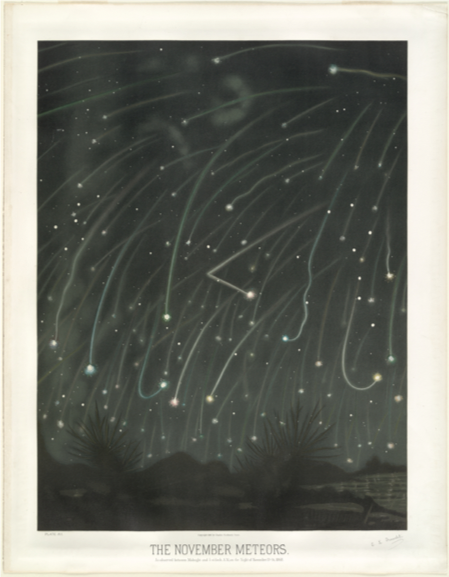 Fig. 3b - Another striking and well-known illustration (dated 1882) of a Leonid storm, but in this case that of 1868, not 1833. The author of the image, Étienne Léopold Trouvelot, observed the event from midnight to sunrise on Nov. 13-14. He wrote that this “may be called an ideal view, since the shooting stars delineated, were not observed at the same moment of time, but during the same night” (Manual of Astronomical Drawing, 1882, p. vi). Image credits: New York Public Library. 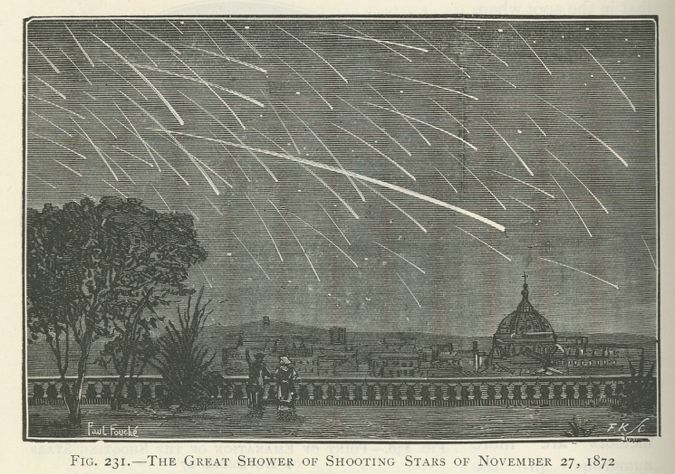 Fig. 4 - The Andromedids of Nov. 27, 1872, as depicted in Camille Flammarion’s Popular Astronomy (here from a 1890s edition by D. Appleton and Company, New York). Associated with the debris of comet Biela, this shower, nowadays quite modest, would produce another storm in 1885. Image credits: Adler Planetarium. 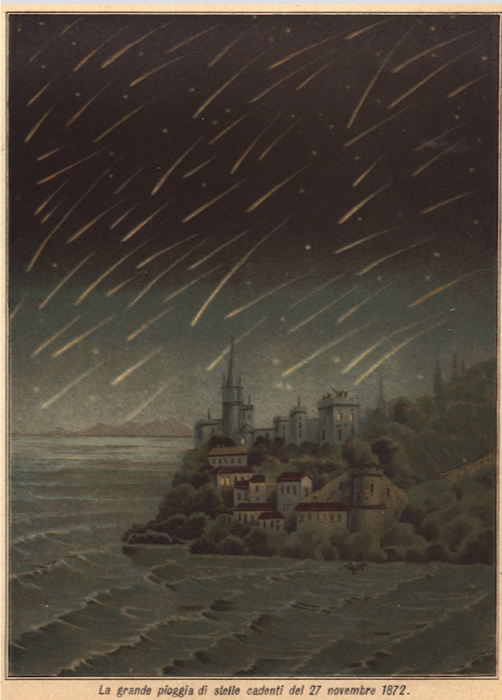 Fig. 5 - An example of how the iconography of the Andromedids storm extended into the 20th century: a color rendition of the 1872 event from Atlante Astronomico, a popular book published in 1911 by the Italian astronomer and lecturer Giuseppe Naccari (1856-1937). Image credits: Adler Planetarium.