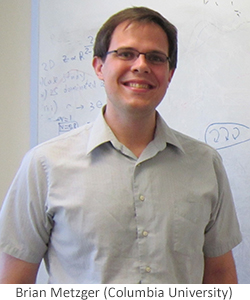 On 17 October the Breakthrough Prize Foundation and its sponsors announced additional recipients of the Breakthrough Prize, awarding a collective total of $22 million to nine researchers for important achievements in the life sciences, fundamental physics, and mathematics. In addition the foundation named 12 early career scientists and mathematicians as recipients of $100,000 New Horizons prizes for achievements in their respective fields. Among them are several young astronomers, including one AAS member:

The 2019 Breakthrough Prize and New Horizons Prize recipients will be recognized at the Breakthrough Prize ceremony, or the "Oscars of Science," on Sunday, 4 November. The gala event, hosted by acclaimed actor, producer, and philanthropist Pierce Brosnan, will bring together luminaries of the science and tech communities with celebrities, athletes, and musicians, all attending with the common goal of celebrating science and scientific achievement. This year's ceremony will be broadcast live on National Geographic, YouTube, and Facebook Live from the NASA Ames Research Center in Mountain View, California.