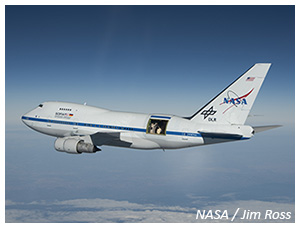 The regular call solicits proposals of any size and combination of instruments. A total of 400 hours of observing time and approximately $4 million of funding is available to support these programs.

The deadline for proposal submission is 9:00 pm Pacific Daylight Time on 7 September 2018. Proposal selections will be announced in November 2018.

A complementary call for proposals for "SOFIA Legacy Programs" (SLP) has also been released, soliciting large coherent programs aimed at high-impact science that also have a significant promise of valuable archival data sets. Programs up to 100 hours of observing time are solicited in this category. In addition to observing time, these programs are invited to deliver higher-level data products (including supporting data, software, and theory). Nominally two SLP programs are expected to be selected per cycle, with observations carried out over two cycles, and a third year included for completion of the higher-level data processing and analysis. Up to $1 million per cycle is available for support of the SLPs.

Any questions about the Cycle 7 Calls for Proposals can be directed to sofia_help@sofia.usra.edu.

SOFIA is a joint project of NASA and the German Aerospace Center (DLR). The aircraft is based at the NASA Armstrong Flight Research Center's Facility in Palmdale, Calif. NASA Armstrong Flight Research Center manages the program. NASA Ames Research Center at Moffett Field, Calif., manages the SOFIA science and mission operations in cooperation with the Universities Space Research Association (USRA) headquartered in Columbia, Md., and the German SOFIA Institute (DSI) at the University of Stuttgart.