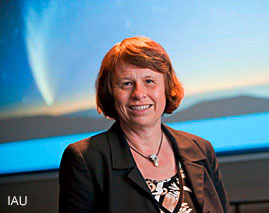 On 31 May the Norwegian Academy of Science and Letters announced its decision to award the 2018 Kavli Prize in Astrophysics to Ewine ("eh-VEEN-uh") van Dishoeck of Leiden University, the Netherlands, "For her combined contributions to observational, theoretical, and laboratory astrochemistry, elucidating the life cycle of interstellar clouds and the formation of stars and planets."

The announcement was made in Oslo, Norway, and streamed live to the World Science Festival in New York City. The Kavli Prize consists of a gold medal and a cash prize of $1 million.

Ewine van Dishoeck has done seminal work on revealing the chemical and physical processes in interstellar clouds, where stars and planets form. Her research has contributed to a breakthrough of astrochemistry, demonstrating how molecules form and evolve during the transformation of a cloud into stellar systems like our own.

Through observational studies using telescopes on Earth and in space, van Dishoeck unveiled the "water trail," measuring water vapor from dense clouds to young stars. This helps us understand the formation mechanisms of molecules crucial for life as we know it. She also discovered important structures within the rings of dust and gas surrounding young stars, the birthplace of planets and comets.

Van Dishoeck is professor of molecular astrophysics at the University of Leiden and has played a leading role in advancing the field of astrophysics. This includes serving on the board of the internationally-supported Atacama Large Millimeter/submillimeter Array (ALMA) in Chile. With this exceptional instrument, van Dishoeck and her colleagues have studied the formation of solar-type stellar systems within our galaxy.

The 2018 Kavli Prizes will be awarded on Tuesday, 4 September. Congratulations, Dr. van Dishoeck!