From the Executive Office 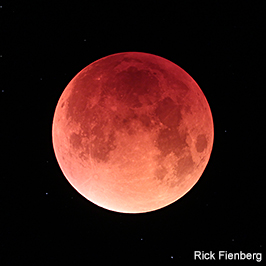 Multiple times this past week while going about my daily activities, I was asked by friends and acquaintances about the amazing lunar events taking place on January 31st: a "super blue blood Moon." Honestly, I hadn't been following these lunar details, so I struggled a bit to talk knowledgeably about what was going on. It's easy to talk about eclipses, so I had that covered. I then shared some details about the Moon's orbit, such as how it is not in the same plane as our orbit around the Sun and other curious dynamical details, which then allowed the conversation to continue whether I knew precisely what a "super blue blood Moon" was or not.

In the end, though, I was disappointed in myself. Here I am, a trained astronomer, technically aware of the inner workings of the universe, and I wasn't able to speak engagingly with members of the general public about something as simple as the Moon, something I did repeatedly and reliably as an undergraduate and graduate student. It didn't feel good to face the change.

After reviewing these interactions in the subsequent days, I concluded that my experience of astronomy is disconnected in many ways from the experience of the general public. They're interested and even excited when some dramatic, visible sky events are happening, whereas sometimes I'm only barely aware of these same events. In my role serving the AAS as Executive Officer, I usually focus on other things.

Aside from overseeing the day-to-day business of the Society (which is often all-consuming), I've lately been tracking preparations for the upcoming decadal survey of astronomy and astrophysics. I've been following developments in the area of scholarly publishing, which are numerous and shifting. I've been following the growing trend of scientific societies to increase their efforts to make their conferences safe and welcoming. I've been keeping up with the latest research by regularly visiting Astrobites and AAS Nova. I've been following discussions in the nonprofit sector about blockchain and its applications. I've been tracking (ever more dejectedly) the poor record of the current administration in supporting science and science-based decision making. And I've been following the growing trend for openness and reproducibility in the sciences, to the point of meetings and conferences being organized on a regular basis on the topic. Frankly, there are many interesting things going on that impact astronomy, and many of them have nothing to do with the sky overhead.

My focus on the things that matter for my job matches, I expect, the focus that all of us as professional astronomers give to what is before us: the responsibilities of the here and now. You may be working on some amazing data or a new theoretical framework. You might be preparing to teach Astro 101 or a graduate-level course. You might be overseeing graduate students or serving on a departmental or university-wide committee. Each of us has a wide range of responsibilities that make us focus on things other than the sky and its appeal to the general public. It's easy to forget that there is a wide, dark, beautiful sky overhead when you're driving home from a long day at the office with light pollution limiting your view of Orion rising in the east.

Let me put a challenge to everyone, the same challenge I've given myself. Try hard to fit in a bit of time each week to really connect with what is going on overhead. Connect with the sky. Know what is coming that might interest the public. Here are some links to get you started:

Try to connect in a way that allows you to be a champion for astronomy. Figure out how to communicate the scientific aspects of whatever is going on in the sky effectively, and don't hesitate to offer your knowledge and enthusiasm to those outside our discipline. If all of our members were to act as energetic explainers of current astronomical events for the curious public while incorporating our excitement for the new discoveries of today and those of the near future that are enabled by taxpayer-funded telescopes, instruments, and space missions, we would be an amazingly effective force for positive growth in federal investment in the astronomical sciences.

Some have said that all politics is local, and I firmly believe that. Further, politics starts with direct, one-on-one interactions. By simply reconnecting with the excitement we felt when entering our discipline and sharing that excitement with anyone curious enough to listen we can reinforce the value of astronomy to them and help justify public funding of our work. Take some time, stay aware, and share. Its a great investment for our discipline's future and one we all have a shared responsibility to undertake.