This post is adapted from a press release issued by the AAS:

Sharing alarm voiced by other scientists, AAS leaders are expressing grave concern over the administration’s proposed cuts to NASA’s astrophysics budget and the abrupt cancellation of the Wide Field Infrared Survey Telescope (WFIRST). “We cannot accept termination of WFIRST, which was the highest-priority space-astronomy mission in the most recent decadal survey,” says AAS President-Elect Megan Donahue (Michigan State University). “And the proposed 10% reduction in NASA’s astrophysics budget, amounting to nearly $1 billion over the next five years, will cripple US astronomy.” 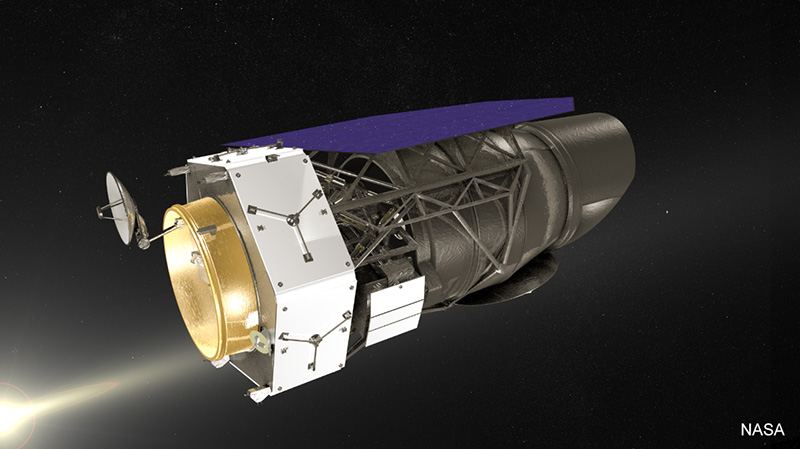 WFIRST, the successor to the 28-year-old Hubble Space Telescope and the forthcoming James Webb Space Telescope, is the top-ranked large space-astronomy mission of New Worlds, New Horizons in Astronomy and Astrophysics, the National Academies’ Astro2010 decadal survey, and is an essential component of a balanced space astrophysics portfolio. Cutting NASA’s astrophysics budget and canceling WFIRST would leave our nation without a large space telescope to succeed Hubble and Webb. Yet just last year another National Academies report, Powering Science: NASA’s Large Strategic Missions, found that “large strategic missions are critical for balance and form the backbone of the disciplines” of NASA’s Science Mission Directorate (SMD), which includes astrophysics. The same report further recommended that “NASA should continue to plan for large strategic missions as a primary component for all science disciplines as part of a balanced program that also includes smaller missions.”

“The AAS has long supported community-based priority setting as a fundamental component in the effective funding, management, and oversight of the federal research enterprise,” says AAS Executive Officer Kevin B. Marvel. “This process has been tremendously successful and has led to US preeminence in space science through missions that are now household names, like Hubble.” Marvel continues, “Not only is WFIRST a top decadal-survey priority in astronomy and astrophysics, but the mission has also undergone rigorous community, agency, and Congressional assessment and oversight and meets the high expectations of an astrophysics flagship.”

Indeed, after Astro2010, scientific and technological advancements enabled an enhanced WFIRST that would be 100 times more powerful than Hubble. Follow-on National Academies’ reports in 2013 and 2016 reaffirmed the significant scientific merit of the enhanced WFIRST mission, and their recommendations for careful monitoring of potential cost and schedule drivers led to NASA’s commissioning of the WFIRST Independent External Technical / Management / Budget Review (WIETR) last fall.

Neither the commissioning of the WIETR nor the content of its findings are an indication that WFIRST is experiencing or will experience the cost overruns that the Webb telescope experienced. In fact, the opposite is true. As Thomas Young, former director of NASA’s Goddard Space Flight Center and former president and chief operating officer of Martin Marietta Corp., testified to the House Science Subcommittee on Space in December 2017, that WFIRST has undergone extensive scrutiny is “no cause for panic. What is transpiring is a perfectly healthy process to assure that the scope, cost, and risk are appropriately defined.”

NASA’s SMD Associate Administrator, Thomas Zurbuchen, fully agreed with the WIETR recommendations to match mission cost with appropriate resources as part of a balanced astrophysics portfolio. After undergoing a redesign over the last several months, WFIRST would once again fit both within the February 2016 budget approved by NASA at the onset of its mission formulation phase and within the notional five-year budget profile the administration requested for NASA astrophysics in its FY 2018 budget less than one year ago. Put another way, the lifecycle cost for WFIRST is the same now as it was two years ago and has been described as both reasonable and credible by numerous review panels.

Marvel worries that the administration’s proposal to scale back federal investment in the nation’s exploration of the universe and terminate WFIRST risks undermining future decadal surveys and other community-based priority-setting processes. “These efforts to achieve community consensus on research priorities are vital to ensuring the maximum return on public and private investments in the astronomical sciences,” Marvel says. “The cancellation of WFIRST would set a dangerous precedent and severely weaken a decadal-survey process that has established collective scientific priorities for a world-leading program for a half century. Such a move would also sacrifice US leadership in space-based dark energy, exoplanet, and survey astrophysics. We cannot allow such drastic damage to the field of astronomy, the impacts of which would be felt for more than a generation.”

The AAS will defend the important role of the decadal surveys in helping set federal spending priorities, to explain the scientific promise of the top-ranked WFIRST mission, and to share our excitement for the field of astrophysics, which has never been more ripe for discovery from the search for life elsewhere in the universe to understanding where we came from and where we’re going. “We look forward to working with Congress to restore funding for WFIRST and for NASA astrophysics overall,” Donahue concludes.