In mid-January the National Academy of Sciences (NAS) announced in a press release that it will honor 19 individuals in recognition of their extraordinary scientific achievements in the physical, biological, and medical sciences. Among the 19 awardees is AAS honorary member Ewine F. van Dishoeck of Leiden Observatory, Leiden University, and the Max Planck Institute for Extraterrestrial Physics. Van Dishoeck, who is also President Elect of the International Astronomical Union (IAU), is cited "for improving our understanding of how molecules, stars, and planets form." 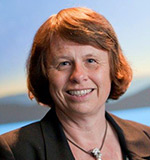 Van Dishoeck, a foreign associate of the NAS, is described as "a world leader in the fields of molecular astronomy and astrochemistry.... [She] employs observations, theory, and experiments to explain the evolutionary traits that lead to the formation of stars and planets from interstellar gas and dust, as well as the chemical basis for the origin of life."

As noted on the NAS website, the James Craig Watson Medal is presented every two years for outstanding contributions to the science of astronomy and carries with it a gold-plated bronze medal, a $25,000 prize, and $50,000 to support the recipient's research. The Watson Medal was established by NAS Member and prolific Canadian-American astronomer James Craig Watson, who is credited with discovering 22 asteroids. He published many articles and wrote A Popular Treatise on Comets (1861) and Theoretical Astronomy (1868).