I was lucky enough to be able to watch the eclipse last week from the High Energy Astrophysics Division meeting in Idaho. My mom, who has never seen an eclipse in her 75 years here on Earth, came along as well. Picking her up at the Salt Lake City airport and heading north, we started to see signs warning of extreme traffic on eclipse day. Stopping at a rest stop, we were surprised to find helpful volunteers handing out certified eclipse glasses to folks who stopped in to get a map or ask about traffic conditions or road repairs up ahead. The signs in Idaho became even more strident, with warnings issued about every 30 miles in big, brightly lit letters.

We avoided some extensive road construction by taking a back way past Craters of the Moon National Monument and Preserve, which I found out while visiting had just received a dark skies designation from the International Dark Skies Association this year (full disclosure, I’m a lifetime member of IDA). Helpful volunteers not only told us about the volcanic history of central Idaho, but a solar telescope was set up near the entrance allowing people to view the Sun with a few volunteers answering questions about the upcoming eclipse. The AAS solar eclipse web page was given as a resource for more information, although the volunteer was not an AAS member.

The eclipse day itself dawned crisp and clear and we headed up to a traffic pull out (for fishing the Salmon River) that I had spotted on Google Maps. We bundled up in blankets and awaited dawn and the start of the eclipse as more and more people pulled into our parking area to do the same. Anticipation built until first contact, when "oohs" and "ahs" could be heard from all directions. As totality approached, excitement built and as Baily’s beads appeared followed by the diamond ring, shouts of joy and surprise echoed across the landscape, returned, somewhat in the same spirit, by the herd of cattle on the ranch across the river, who were a bit unnerved by the whole thing.

We were all amazed with the beautiful large corona, the delightful 360 degree sunset, a very bright Venus overhead and, through a neat physics effect, the distant mountains becoming clearly visible as they became backlit from scattered light outside of the eclipse path, while the scattered light off the smoke haze in the eclipse path disappeared. After the Sun reappeared, tears were shed, hugs exchanged, and pledges to see the "next one" shared with friends, new and old. It was an amazing event for all. 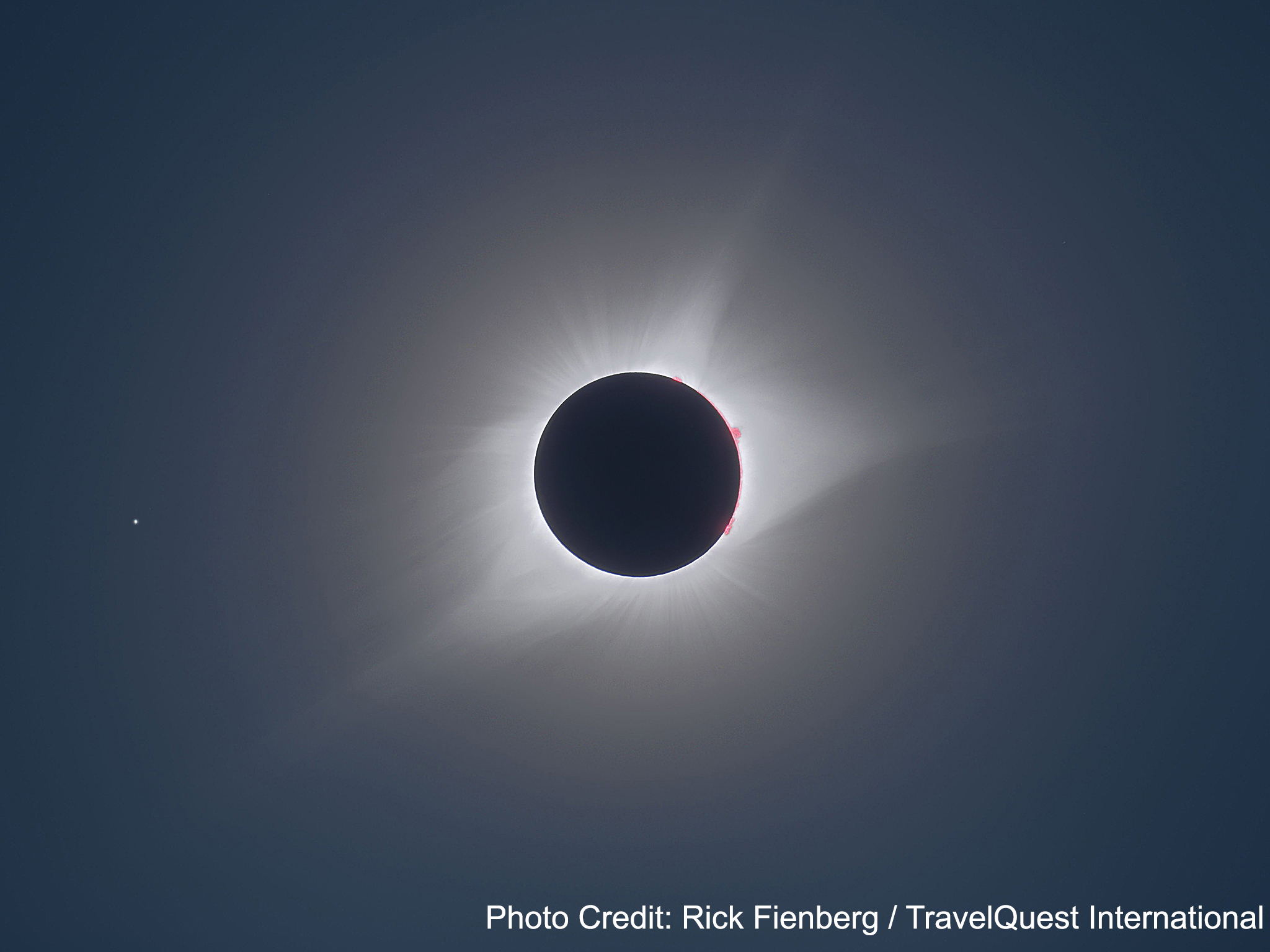 What made the event even more fantastic across the US than it would have been was the combined effort of literally thousands of people, all volunteering their time to help organize and carry out local events as well as communicating with the media about safety, the magnificence of the event itself, and astronomy in general. Thank you one and all.

Nearly four years ago, the AAS formed the Solar Eclipse Task Force, chaired by Angela Speck and Shadia Habbal and assisted by AAS Press Officer Rick Fienberg, to help coordinate activities across the nation. It is clear this effort had a significant impact and I want to thank the co-chairs and all of the Task Force members, as well as the AAS Council (now Board of Trustees) for funding the early work of the Task Force. More importantly, I want to thank the National Science Foundation (NSF) for providing a grant to help increase the impact of the Task Force. The NSF’s highly leveraged investment in this effort (and other projects) helped bring the science and excitement of the eclipse to millions of people across the United States.

As all of the groups who undertook public outreach activities wrap up their efforts and return to their regular work, they will be exploring lessons-learned during the process. How could we have done better? Where did we miss the mark? What activities had significant impact? How could we have avoided the very late response of the media to the eclipse? Was our website sufficient, or could we have done more? We must ensure that we learn from the excellent efforts all the volunteers made this time around so that future events can be even more successful.

On the issue of impact, here is a graph showing the number of unique visitors to the eclipse.aas.org web page in the weeks before the eclipse. I think it speaks for itself. We had to undertake special efforts to ensure we were able to serve everyone who sought information from our pages in the final days, but our IT team and hosting company did very well and we had only one or two short periods with slow access, nearly unnoticeable compared to other resources out there. 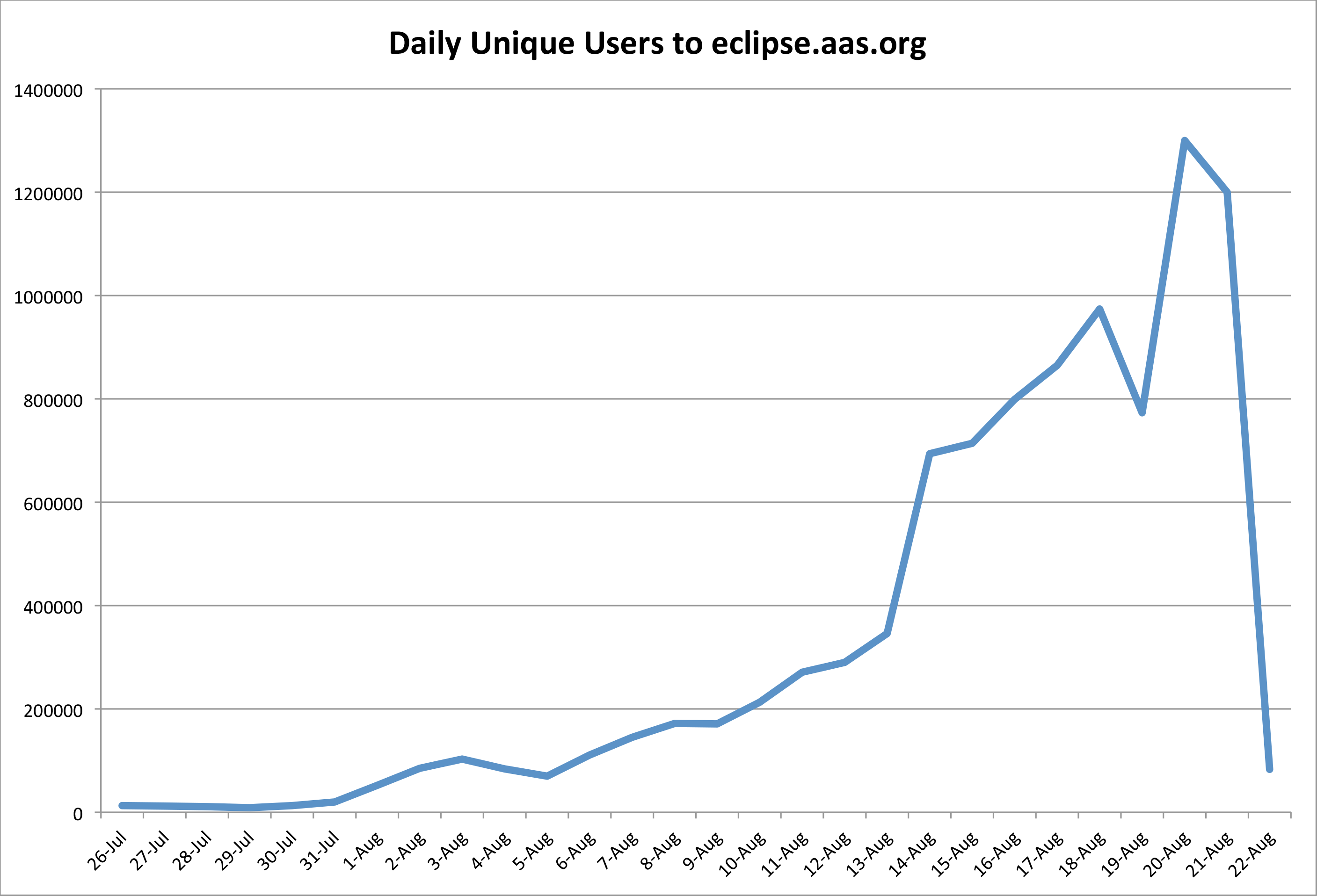 In closing, thanks once again to every single person who took the time to reach out and share the excitement of the eclipse with someone. Collectively, we have had a huge and positive impact by sharing humanity’s scientific understanding of the universe.