Each month as part of this new series from the Historical Astronomy Division of the AAS, an important discovery or memorable event in the history of astronomy will be highlighted. This month, we look at the 2004 transit of Venus. 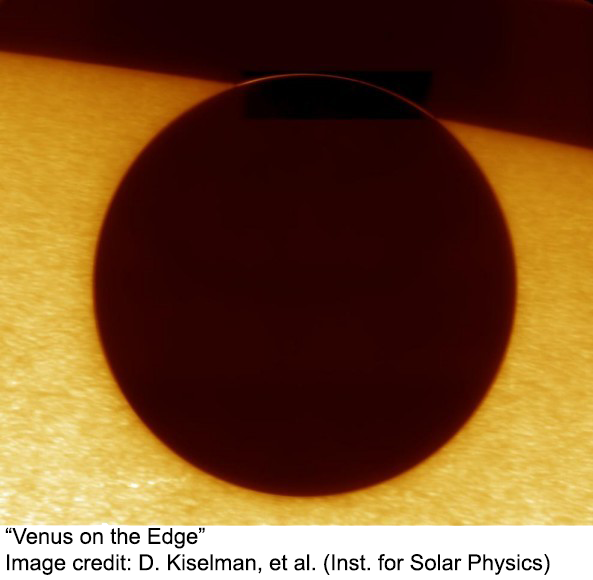 Though a very recent event, Venus transits are rare enough that the first one of this millennium warrants mention. For the inhabitants of Earth, transits are rather uncommon phenomena for more reasons than that there are only two planets between ours and the Sun. When a transit occurs, the orbital path of the planet appears to cross the disk of the Sun, which does not occur very often with Venus as its orbital plane is tilted by 3.4° in relation to Earth’s. When the 8 June 2004 Transit of Venus occurred, no human alive had previously witnessed one; the last one prior to that occurred on 6 December 1882.

Rare as they are, Venusian transits are easy to predict. They typically follow a 243-year cycle in which the transits are 105, 8, 121, and 8 years apart. The 8-year pairs alternate between June and December. In 1627, Johannes Kepler predicted the 7 December 1631 event, becoming the first person to predict a transit. It was not visible in most of Europe, however, so no one could verify his prediction. Jeremiah Horrocks of Much Hoole, England, made the first recorded observation of a Venusian transit on 4 December 1639. Horrocks’ observation allowed him to deduce the approximate size of Venus, as well as estimate the distance between the Earth and the Sun, or an astronomical unit (AU). He estimated 59.4 million miles (95.6 million kilometers), well below the actual distance of 93 million miles (149.6 million kilometers), but the best estimate of the time. Refining this value would become one of the main scientific reasons for transit observations. 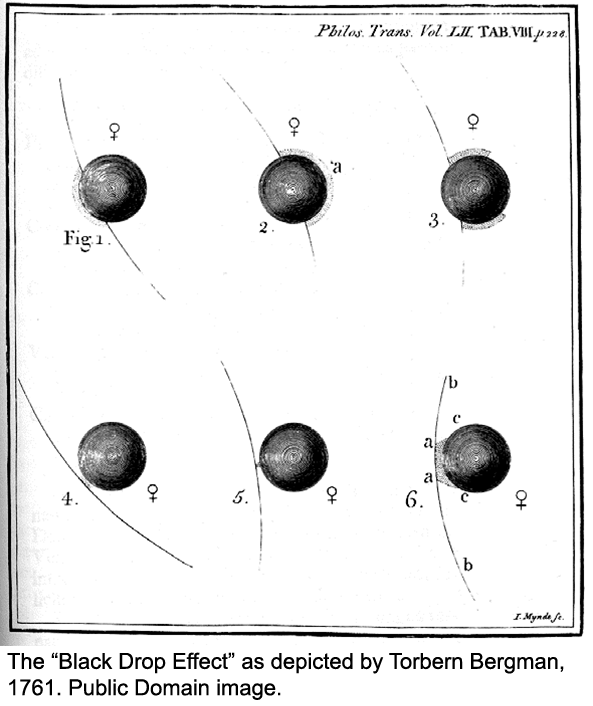 By the pair of June transits in 1761 and 1769, scientists had determined that observations of the transit from multiple locations on Earth could be used to gauge solar parallax and from that the length of an AU. Using combined data from both these transits, Jerome Lalande, a French astronomer, computed the AU to be 95 million miles (153 million kilometers). Data from expeditions to view the December transits of 1874 and 1882 further refined the value. Simon Newcomb of the US Naval Observatory combined data from the four transits to calculate the value of 92.95±0.19 million miles (149.59±0.31 million kilometers). The accuracy of both of these determinations suffered from the phenomenon known as the “Black Drop Effect," which is due to the quality of the optics used for observations.

More modern techniques such as radio telemetry or radar, which are not affected by the “Black Drop Effect,” have superseded solar parallax for refining the AU value. However, when Mikhail Lomonosov observed the 1761 transit from the Imperial Academy of the Science in St. Petersburg with a two-lens refractor and a weak solar filter, he discovered the Venusian atmosphere, a continuing motive for transit observations.

With the AU precisely determined, and the vast technological improvements available for the June 2004 and 2012 Venus transits, astronomers realized that these events could help them investigate exoplanets. During the 2004 transit, scientists attempted to measure the dimming of the Sun’s light as Venus blocked some of it. The 2012 transit fostered more ideas on how to use transits to discover exoplanets; transit studies have since become the most prolific exoplanet-detection method. The next pair of Venus transits will occur on 10-11 December 2117 and 8 December 2125. For those who can’t wait that long, Mercury will next transit the Sun on 11 November 2019.