This announcement is adapted from a Gruber Foundation press release:

The 2017 Gruber Foundation Cosmology Prize recognizes Sandra M. Faber for a body of work that has helped establish many of the foundational principles underlying the modern understanding of the universe on the largest scales.

The citation praises Faber for “her groundbreaking studies of the structure, dynamics, and evolution of galaxies.” That work has led to the widespread acceptance of the need to study dark matter, to an appreciation of the inextricable relationship between the presence of dark matter and the formation of galaxies, and to the recognition that black holes reside at the heart of most large galaxies. She has also made significant contributions to the innovations in telescope technology that have revolutionized modern astronomy. Through these myriad achievements, the Gruber citation adds, Faber has “aided and inspired the work of astronomers and cosmologists worldwide.”

Faber will receive the $500,000 award as well as a gold medal at a ceremony this fall. 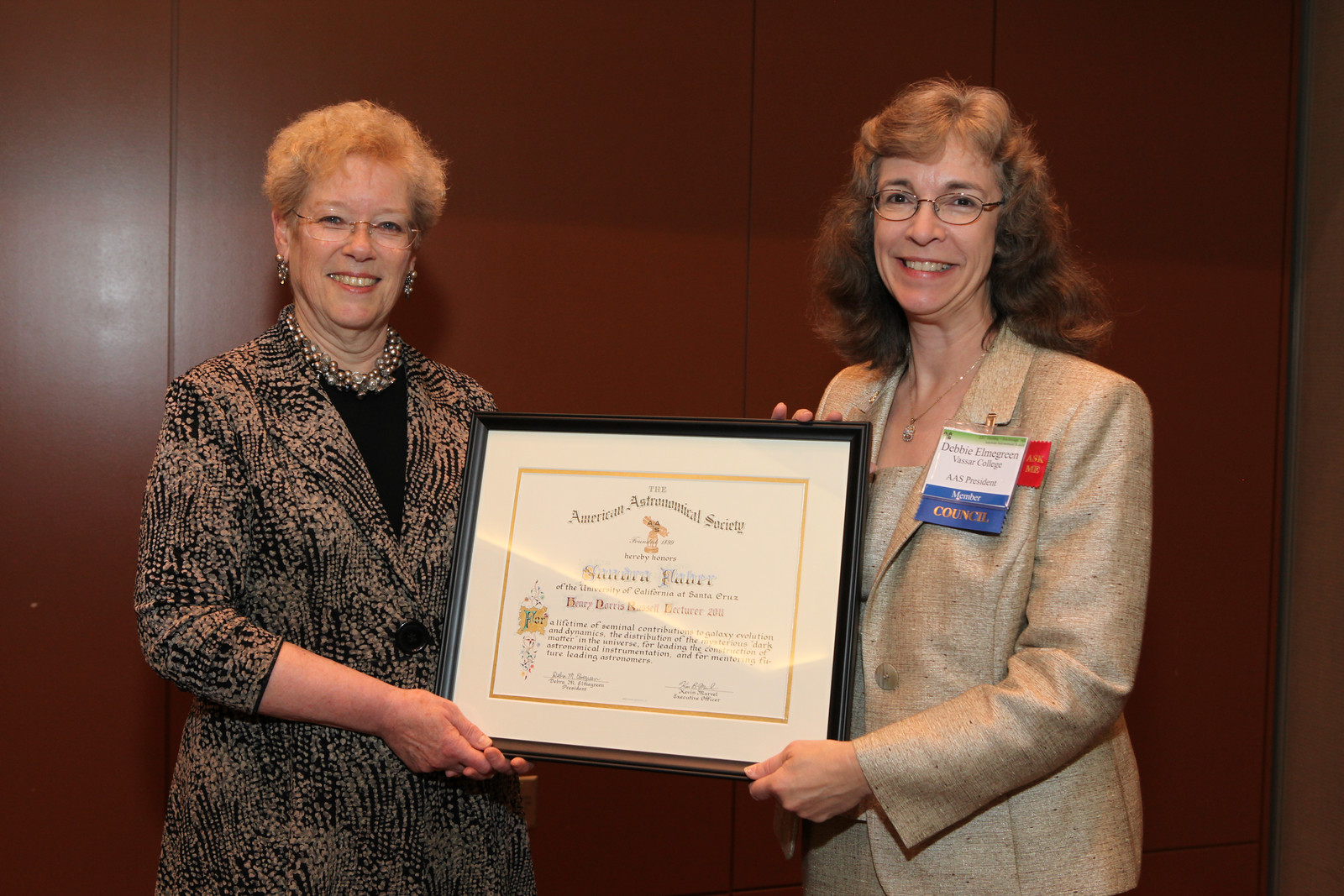 Less than a hundred years ago, astronomers were still debating whether our Milky Way Galaxy was the entirety of the universe or if other galaxies existed beyond our own. Today astronomers estimate the number of galaxies within the visible universe at somewhere between 200 billion and 2 trillion. For more than four decades Faber — now Professor Emerita at the University of California, Santa Cruz, and Astronomer Emerita of the University of California Observatories — has served as a pivotal figure in leading and guiding the exploration of this unimaginably vast virgin scientific territory.

A partial summary of her achievements includes:

As a body of work, these advances and discoveries, both observational and technological, have helped define how scientists think about and investigate galaxies and superclusters of galaxies, the largest structures in the universe.

For Faber, though, they have also helped define how civilization can conceive of its place in the cosmos. In recent years she has become a prolific public speaker, delivering her lecture “Cosmic Knowledge and the Future of the Human Race” around the world. That title speaks volumes about her own philosophy.

“Astronomical knowledge,” she says, “is probably the most important single discipline that you need to know in order to be an informed citizen of Earth.” The reason, she says, is that developments in astronomy over the past few decades have shown us that we have been given “the precious gift of cosmic time” — the concept that the universe exists on a scale of billions of years and that planet Earth will be a safe haven for us for hundreds of millions of years into the future. “Astronomical knowledge tells us how we got here and furthermore, having understood that, we can extrapolate more confidently for the future.”

Few if any astronomers have done more to make that understanding possible than Sandra Faber.

In addition to the cash award, Faber will receive a gold laureate pin and a citation that reads, “The Gruber Foundation proudly presents the 2017 Cosmology Prize to Sandra Faber for her groundbreaking studies of the structure, dynamics, and evolution of galaxies. Her research ranges from detailed studies of the stellar populations, masses, dark matter content, and supermassive black holes in nearby galaxies, to surveys of distant galaxies over cosmic time. The results of these investigations have aided and inspired the work of astronomers and cosmologists worldwide.”