This Month in Astronomical History: Women Computers at Dudley Observatory

Each month as part of this new series from the Historical Astronomy Division of the AAS, an important discovery or memorable event in the history of astronomy will be highlighted. This month, we look at the women computers working at the Dudley Observatory. 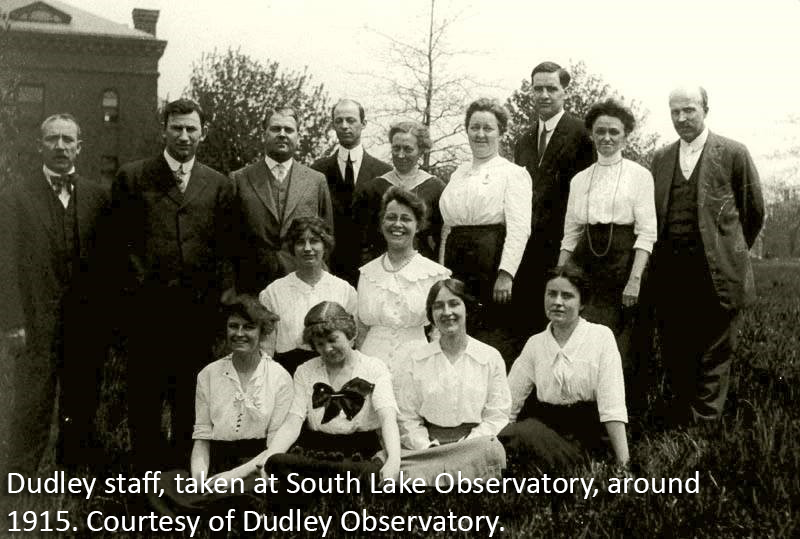 May marks the 165th anniversary of the foundation of America’s oldest non-academic institute of astronomical research: Dudley Observatory. Now a center for educational outreach and historical research in astronomy, the observatory began in 1852 as the keystone of the University of Albany, an institution that was never realized. Without the direction of an academic institution, Dudley has had the flexibility to adapt to the changing needs of the times.

Dudley Observatory had a rough beginning and even shut down in 1873. In 1876, Dudley was revived under the direction of Lewis Boss, who was succeeded by his son Benjamin in 1912. They decided to focus Dudley’s resources on astrometry, specifically creating a star catalog. In 1905, Dudley became the Carnegie Institute’s department of Meridian Astronomy. With a Carnegie grant, astronomers at Dudley began work on a catalog of the exact positions of over 30,000 stars, which would become the pinnacle of Dudley’s scientific achievements.

Fixing the positions of so many stars required large amounts of computation. In fact, each hour of observation generated 20 hours of calculations. This required a competent staff, but the Bosses also wanted to remain fiscally responsible. Following Edward Pickering’s model at Harvard, he began hiring women, mainly high-school graduates, as "computers." Some worked from home for 8 cents a star while those who worked regular hours at Dudley were paid 20 to 25 cents per hour. Female workers were paid about half the wages of their male counterparts, making their employment highly cost-effective. "They are as rapid and accurate as men and much more patient. In copying… and all such work, I have found them superior to men," Lewis Boss wrote to the Lick Observatory director, W. W. Campbell, in 1903. At that time, there were four female computers on the Dudley staff. That number would grow in the following years to as many as 20 at a time. By 1940, the Dudley star catalog project had employed over 80 women.

Unfortunately, not much is known about the women computers of Dudley Observatory. Most women came for the money and stayed only for a year. Unlike at Harvard, Dudley offered little opportunity for advancement; Dudley publications mention very few computers. Isabella Lange rose to supervisor of the computing corps and became co-author of a paper on stellar luminosities. In the post-catalog era, she and fellow computer Grace Buffum remained at Dudley as part of the staff. They are both mentioned as visitors in the report of the 21st AAS meeting (August 1918).

They completed observations of the northern hemisphere in 1909 and Lewis Boss moved his male team to a temporary observatory in San Luis, Argentina, to catalog the stars seen in the southern hemisphere. They completed the measurements in 1937 and published the final General Catalogue of 33,342 Stars for the Epoch 1950 that same year. It provided standard positions and proper motions of stars brighter than seventh magnitude seen from both the northern and southern hemispheres and remained a standard tool of astronomers until the 1970’s.

Hidden Figures, a book and movie featuring NASA’s computers, Dava Sobel’s The Glass Universe, about Harvard’s pioneering female workers, and The Computers, a documentary about the ENIAC programmers, have put these women and their contributions in the spotlight. Although illuminating the individual stories of the women who enabled Dudley’s General Catalogue may be difficult, acknowledging the essential work they accomplished is a good beginning.

This Month in Astronomical History is funded in part by the Dudley Observatory Herbert C. Pollock Award.