This Month in Astronomical History: Launch of Sputnik 2

Each month as part of this new series from the Historical Astronomy Division of the AAS, an important discovery or memorable event in the history of astronomy will be highlighted. This month, we look at the Soviet Union's launch of Sputnik 2. 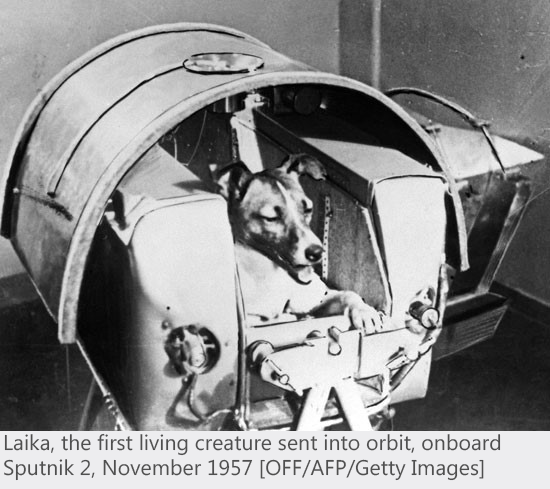 3 November 1957: the Space Race was in full tilt and almost a month had passed since the successful launch of Sputnik 1. Morale was high in the USSR and Nikita Khrushchev, First Secretary of the Communist Party of the Soviet Union, wanted to make sure it stayed that way. Days after Sputnik 1, he ordered Sergei Korolev, chief rocket engineer of the Soviet Space Program, back to work so that that country could celebrate the 40th anniversary of the Bolshevik Revolution with the launch of a second satellite. Only 30 days after Sputnik 1 had entered Earth’s orbit, Sputnik 2 became the second man-made satellite in space, but this time the stakes were higher. Unlike its predecessor, Sputnik 2 carried various scientific instruments to learn about the universe beyond Earth. It was also the first spacecraft to carry a living creature into orbit: a dog named Laika.

Sputnik 2 was launched on a modified intercontinental ballistic missile (ICBM) R-7, similar to that used for Sputnik 1, into a 212 x 1,660 kilometer (132 x 1,031 mile) orbit with a period of 103.7 minutes. Unlike its sister satellite, Sputnik 2 was not designed to detach from the R-7 core which allowed the existing telemetry system to transmit data from the spacecraft. In addition to Laika, the satellite contained a spectrophotometer designed at the Lebedev Institute of Physics, which provided data on solar radiation, especially ultraviolet and X-ray, and a Geiger counter from Moscow State University, which collected information about cosmic rays.

The Soviets had done previous high-altitude launches with dogs as passengers, so the transition to launching a dog into orbit was relatively easy. Laika was contained in a sealed capsule, with a pressurized, padded cabin that had enough room for her to lie down or stand. It contained an air-regeneration system that provided oxygen and a ventilator fan that would turn on if the temperature rose above 15°C. A gelatinous substance made from water, agar, dried-bread powder, powdered meat, and meat tallow supplied her with food. She was fitted with a harness, a bag to collect waste, and electrodes to monitor her vital signs. With no safe re-entry plans available at the time, the Soviet team estimated that oxygen to the passenger would run out after 10 days. Early monitoring suggested that Laika was stressed during the launch, but after a short time, her readings returned to normal. During flight, the cabin slowly heated, eventually reaching temperatures of 40°C. After a few hours, her biometric signals failed, suggesting that she died from overheating.

Sputnik 2 remained in orbit for 162 days, reentering Earth’s atmosphere on 14 April 1958. The launch of this second satellite gave the Soviets a large head start in the Space Race, sparking a great sense of urgency in Americans, now afraid of falling too far behind. However, the USA was the next to launch an orbiting satellite: Explorer 1 in January 1958. This gave American scientists the initial push they needed to eventually be the first to land a man on the moon.