Each month as part of this new series from the Historical Astronomy Division of the AAS, an important discovery or memorable event in the history of astronomy will be highlighted. This month, we look at the life of Edwin Powell Hubble (20 November 1889 – 28 September 1953). 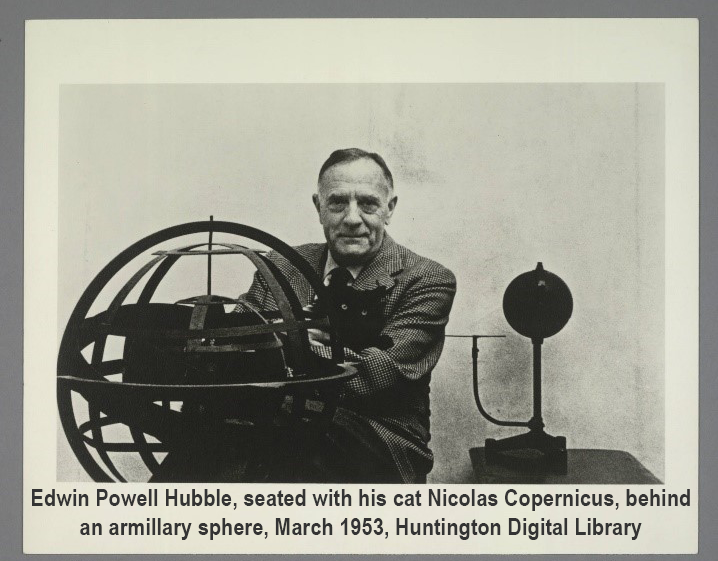 "Equipped with his five senses, man explores the universe around him and calls the adventure Science." (Hubble in "The Exploration of Space". Harper's Magazine 158: 732). Edwin Powell Hubble had the potential to succeed as an athlete, lawyer, or soldier. Instead, he took the path towards the stars and joined the adventure of science. Along the way, he took the lead and, over the course of his lifetime, revolutionized our understanding of the universe. Twice.

Hubble was born in Missouri in 1889. Though his athletic achievements outshone his intellectual abilities in high school, he successfully completed a BS degree in 1910 from the University of Chicago and went on to study law as a Rhodes Scholar at Oxford. He passed the bar exam in 1913 and started work as a lawyer in Louisville, Kentucky. However, law was not his passion, and Hubble decided to return to the University of Chicago for a PhD in astronomy, which he completed in 1917, just as the US entered WWI.

Hubble felt drawn to serve his country. He completed his dissertation, passed his oral exams, enlisted in the infantry, and headed for France. He returned in 1919 as Major Hubble, ready to accept an earlier invitation to join the Mount Wilson Observatory staff. With the newly installed 100-inch Hooker Telescope, the largest in the world at the time, he observed patches of cosmic cloud and dust known as nebula. In 1924, Hubble discovered a new Cepheid variable star in the Andromeda Nebula; the subsequent distance measurement that placed it far outside the newly measured borders of our Milky Way galaxy shook the astronomical world. At the time, most people believed the universe was contained within our galaxy, but Hubble concluded that this nebula was an independent galaxy and suddenly the universe got a whole lot bigger.

By the 1930s, enough galaxies had been discovered that Hubble created a cataloging system that is still used today, classifying them as ellipticals, spirals, and barred spirals. While looking at the various features of the newly documented galaxies, Hubble rocked the world of physics again. He noted that the farther apart galaxies are from each other, the faster they move away from each other (now known as Hubble’s law). From this, he concluded that the universe is expanding uniformly, determining a rate now known as Hubble’s constant; the exact value continues to be refined today. This discovery provided observational proof of a discarded theoretical solution to Albert Einstein’s general relativity equations and eventually supported the Big Bang Theory.

Hubble remained an avid astronomer for the rest of his life and was the first to use the 200-inch Hale Telescope at Palomar Observatory in 1948, but briefly returned to military service during WWII, serving as the head of ballistics at the Aberdeen Proving Ground. He died from cerebral thrombosis 28 September 1953.

Hubble’s greatest dream was to receive a Nobel Prize in Physics for his work and he was nominated in 1953, but he died shortly before the Laureates were chosen and this dream was never realized. However, Hubble received many other awards throughout his life, and continues to be memorialized after his death. The orbiting space telescope that bears his name launched in 1990 to help extend the reach of the five senses with which scientists continue to explore the universe around them.

Updated 28 October 2016: The previous version of this post stated that Edwin Hubble was considered ineligible for the Nobel Prize. He was in fact nominated in 1953, the year he died.