This article is adapted from a press release from the National Academies: 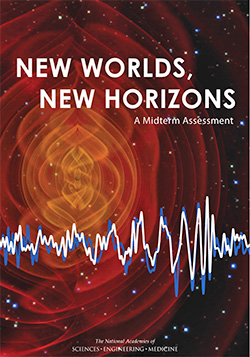 While scientists have made remarkable advancements in astronomy and astrophysics since the beginning of this decade — notably the first detection of gravitational waves and the discovery of distant Earth-like planets — unforeseen constraints have slowed progress toward reaching some of the priorities and goals outlined in the 2010 decadal survey of these disciplines, says a new report from the National Academies of Sciences, Engineering, and Medicine. The report calls for NASA, the National Science Foundation (NSF), and the Department of Energy (DOE) — the federal agencies largely responsible for funding and implementing these research activities— to maintain, and in some cases adjust, their programs in order to meet the survey’s scientific objectives.

The 2010 survey, New Worlds, New Horizons in Astronomy and Astrophysics (NWNH), identified an array of scientific and technical projects for the next decade that would trace back the formation of the first stars and galaxies, seek out black holes, reveal nearby habitable planets, and advance understanding of the fundamental physics of the universe. The new report is an assessment of the progress made thus far by NASA, NSF, and DOE on the suite of large-, medium-, and small-scale programs given priority in the survey, including NASA’s Wide Field Infrared Survey Telescope (WFIRST) and the NSF/DOE’s Large Synoptic Survey Telescope (LSST).

“The survey outlined a compelling scientific program for opening new fields of inquiry through a variety of discovery areas, and we are already seeing outstanding discoveries that fulfill the vision of NWNH,” said Jacqueline N. Hewitt, professor of physics and director of the Kavli Institute for Astrophysics and Space Research at the Massachusetts Institute of Technology, and chair of the committee that carried out the study and wrote the report. “The scientific discoveries and improvements in technology of the past five years steer us in a certain direction. Having this opportunity to give advice on midcourse corrections to the funding agencies is very important.”

Some of the recent major scientific accomplishments that the report highlights are the first detection of gravitational waves by the NSF-funded Laser Interferometer Gravitational-Wave Observatory (LIGO); the NASA-funded Kepler satellite’s extraordinary discovery of diverse planets and planetary systems that indicate the possibility of more than a billion Earth-like planets among the exoplanets that are present around stars throughout the galaxy; and success of the Atacama Large Millimeter Array (ALMA) — a huge array of radio telescopes in the Atacama desert of Chile, recommended by the 2000 decadal survey and built by NSF and a consortium of international partners.

NASA’s WFIRST, the top-ranked large space-based mission in the 2010 survey, is designed to answer questions about dark energy, exoplanets, and general astrophysics. Since the release of the survey, the WFIRST scope and design have evolved to include a 2.4-meter telescope, larger infrared detectors, and an instrument called a coronagraph that enables directly imaging an exoplanet by blocking the light emitted by its parent star. These changes, while scientifically compelling, could result in further increased costs and further delays for the mission, the committee said. It recommended that prior to final confirmation of the changes, NASA conduct an independent review of the project to ensure it does not crowd out investment in the rest of NASA’s astrophysics portfolio and, if necessary, descope the mission.

The report also finds that the driving factor in the delay or non-pursuit of some new NASA initiatives, including WFIRST, was the schedule change and increased cost associated with the James Webb Space Telescope (JWST) — a successor to the Hubble Space Telescope that is set to launch in 2018. As a result, NASA’s WFIRST mission was delayed, and the Laser Interferometer Space Antenna (LISA) — a space-based gravitational wave detector that first took shape as collaboration between NASA and the European Space Agency (ESA) — did not go forward. However, following the LIGO results, the report recommends that NASA restore support this decade for space-based gravitational wave research so that the US is in a position to be a strong technical and scientific partner in a planned ESA-led gravitational observatory. The report notes that US participation could enable the full scientific capability for the ESA-led mission as envisioned by NWNH.

The committee found that NSF made progress toward its highest priority with the initiation of the LSST — which is on schedule for 2020 and will survey the entire sky visible from its site in Chile and produce huge, unprecedented catalogs of objects and transient events. However, this and the survey’s other recommended priorities for NSF were based on a scenario in which the budget for its Division of Astronomical Sciences would double over the course of the decade. However, the division’s budget has not even kept up with inflation, and the operational costs of NSF’s powerful facilities are consuming the available budget for its research programs. NSF and the National Science Board needs to take action to preserve the ability of the astronomical community to fully utilize NSF’s capital investments in its forefront and other facilities, the report says.