The AAS Division on Dynamical Astronomy (DDA) is delighted to announce that the recipient of the 2016 Dirk Brouwer Award is Professor Rosemary F. G. Wyse of Johns Hopkins University. 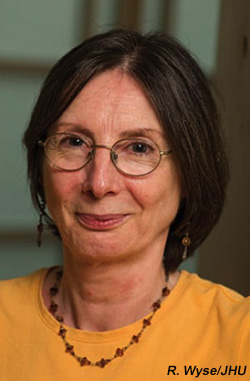 Professor Wyse’s work, which combines theory and observations, has played a fundamental role in advancing our understanding of the structure, dynamics, and formation history of the Milky Way and its satellites. She has been a leading proponent of the view that since low-mass stars live for a Hubble time, they can serve as a fossil record within our own galaxy of the conditions in the early lives of galaxies, thereby complementing high-redshift studies. She was one of the major early advocates of wide-field multi-object spectroscopic surveys of stars in the Milky Way and other galaxies and is one of the leaders of RAVE (the RAdial Velocity Experiment).

Professor Wyse developed the first model that formed a thick disk as a natural consequence of the dynamical evolution of disk galaxies and was among the first to recognize the importance of the properties of the galactic thick disk in constraining the early evolution and merging history of the Milky Way. She has also made significant contributions to the study of dark-matter-dominated dwarf spheroidal galaxies.

In addition to her wide-reaching and influential research, she has been an extraordinary mentor and role model. This award also recognizes her service to the astronomy community, which includes the presidency of the Aspen Center for Physics (2010-2013) and of IAU Commission 33, the vice-presidency of IAU Division VII, and memberships on the AURA Observatories Council, AAS Publications Board, and the Board of Reviewing Editors of Science Magazine.

Dirk Brouwer (1902-66), for whom this award is named, was a Dutch-American astronomer and a leading authority in celestial mechanics. He was a professor at Yale University and trained a generation of astronomers in dynamics and celestial astronomy. He was an inspiring leader in the field of celestial mechanics during a period that saw a revival and flowering of that discipline, from its purely academic and esoteric role to one of widespread development and application in our exploration of space. He was successful as a researcher, as a teacher, and as an administrator. He always strove to make the growth of his subject truly international. From 1941 to 1966 he was editor of the Astronomical Journal. Along with Gerald Clemence he wrote the classic textbook Methods of Celestial Mechanics. He was a member of the American Association for the Advancement of Science, the International Astronomical Union, and the National Academy of Sciences, and he was a corresponding member of the Royal Netherlands Academy.