This announcement is adapted from two press releases that are linked below. 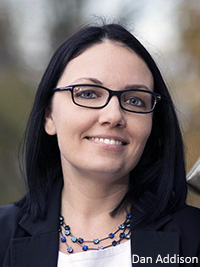 On 17 March 2016 L'Oréal USA announced that University of Virginia astronomer Sabrina Stierwalt will be recognized at the 18th annual L'Oréal-UNESCO For Women in Science Awards, held in Paris on 24 March. Every year, the L'Oréal-UNESCO For Women in Science program celebrates five outstanding Laureates for their groundbreaking work, exceptional talent, and deep commitment to their profession. In addition, the program honors 15 promising young researchers making significant contributions in disciplines as varied as neuroscience and evolutionary biology.

Sabrina Stierwalt is a postdoctoral scientist in astronomy and astrophysics and is being honored as an International Rising Talent for her work on the study of how galaxies evolve. She is conducting the first systematic study of gas dynamics and star formation in interacting dwarf galaxies, with the goal of better understanding how stars formed in the early universe. In its second year, the International Rising Talents program recognizes the achievements of women who are in the early stages of their scientific careers and provides a 15,000 euro grant along with mentorship support and international exposure. The International Rising Talents were chosen from among the recent winners of the For Women in Science fellowships awarded locally by L'Oréal subsidiaries worldwide, including the L'Oréal USA For Women in Science fellowship program.

Over the course of its 18-year history, the L'Oréal-UNESCO For Women in Science program has recognized more than 2,500 women scientists in 112 countries, including two Nobel Prize winners. 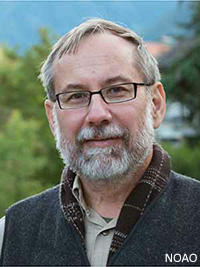 On 4 March the American Association of Physics Teachers (AAPT) announced that Stephen M. Pompea (National Optical Astronomy Observatory) will receive the Robert A. Millikan Medal during the 2016 Summer Meeting in Sacramento, California. This award recognizes educators who have made notable and intellectually creative contributions to the teaching of physics.

Steve Pompea holds the rank of Observatory Scientist and leads NOAO's Department of Education and Public Outreach in Tucson, Arizona. He started his teaching career in 1977 at Air Academy School District in Colorado, where he taught physics, astronomy, and Earth science courses. He also was responsible for teaching gifted and talented science classes in summer programs in Nebraska during the time he worked in the aerospace industry. His professional work on astronomy instrumentation and optical properties of surfaces at Martin Marietta Aerospace, the University of Arizona, and at the Gemini 8-Meter Telescope Project greatly informed his teaching approach that emphasized problem solving and innovative teaching methods. He has consulted widely in on the development of science education centers, museum exhibits, and instructional and teacher professional development materials. Collaborations with OSA–The Optical Society and SPIE–The International Society for Optics and Photonics led to projects like the NSF-funded Hands-On Optics Project for middle-school students, which Pompea directed.

As a Program Director for the NSF-funded International Year of Astronomy (IYA) 2009, he helped develop and implement many educational projects, including the Galileoscope project which produced over 200,000 telescope kits and had an impact on over 100 countries. His current projects include professional development for astronomical eco-tourism efforts in Chile and an NSF-sponsored project (Colors of Nature) that combines art, biology, and optical physics to engage girls in science.