As a society, we have to celebrate outstanding work by young people in science at least as much as we do Super Bowl winners. Because superstar biologists and engineers and rocket scientists and robot-builders… they’re what’s going to transform our society. They’re the folks who are going to come up with cures for diseases and new sources of energy, and help us build healthier, more successful societies. 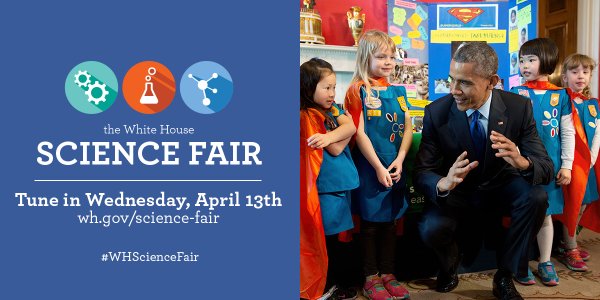 Student’s attending this year’s Science Fair are tackling some of our Nation’s greatest challenges, from combating climate change to uncovering new ways to fight cancer to discovering ways to reach farther beyond our atmosphere as part of the Mars generation. We look forward to celebrating their ingenuity and entrepreneurship — not just in this moment, but as we look toward a future where they’ll be the scientists, engineers, mathematicians, and innovators who stand to change the world.

Also included in today's announcement was an invitation for K-12 students across the country to submit their stories of discovery and invention, and for individuals or organizations that encourage students in science, technology, engineering, and math (STEM) to share their work.

The White House Science Fair will stream online at wh.gov/science-fair, and you can follow the action on Twitter by following @WhiteHouse or #WHScienceFair.